Sweet Sleuth is a 4-player and a duel minigame in Mario Party DS. Its name is a pun on "sweet tooth", which is what someone fond of sweets is said to have. 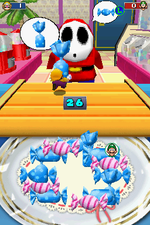 If the player finds the correct candy, they score. If they give the wrong candy, they must try again. The candies are designed to look very similar, some only differing in shape or in the orientation of the wrapper pattern, and more candy is poured onto the plate several times. Whoever gives Shy Guy the most correct candy, wins.