Cherry-Go-Round is a 4-Player and Duel minigame that appears in Mario Party DS. Its name is a pun on "merry-go-round," which is another name for a carousel, and the word "cherry." This minigame is the third minigame in Score Scuffle. 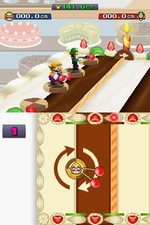 If everyone breaks the current record by tying, it counts as a new record even though no one won, as the screen will say "Tie" after the "New Record" fanfare. This also applies to the other minigames with a record system.