Cyber Scamper is a 4-Player and Duel minigame in Mario Party DS. 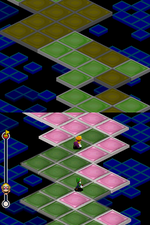 The players must walk on tiles to reach the finish in a random course. In this game, tiles of many colors alternate, turning black after their time is up. There are four blue tiles in this game, each marking something in the course. After the first blue tile, which is the beginning, the white tiles alternate between green and pink, with no holes in the course itself. This allows players to move freely in the middle of the course without the worry of falling. After the second tile, which is shown after the players go through about a quarter of the course, the pink tile is replaced with a yellow tile, and players have to watch for holes inside the course. After the third tile, which is about halfway through the course, even more holes appear and pink is put back, meaning that the player must wait longer to see if there is a tile in a given location. The fourth tile marks the end of the course. The players who reach the final blue tile, or the last player remaining, win. If all the players fall off the course, the minigame ends in a tie.

At the end of the minigame, the winner(s) come(s) out of an arcade game screen and do(es) their victory pose(s).