Get the Lead Out

Get the Lead Out is a 4-Player and Duel minigame in Mario Party DS. The name of the minigame comes from an idiom meaning "to move faster." This minigame appears as the fifth minigame in Score Scuffle. 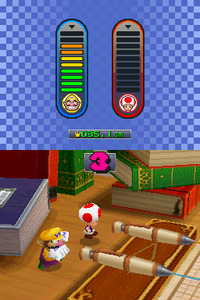 In the game, the players are pushing lead out of mechanical pencils as fast as they can in ten seconds. Once the time is up, the screen moves over to show grid paper. It is at this time that the distance is measured. The player with the most lead pushed out will win the game and be shown doing their victory dance on the grid paper. If a tie is declared, all the players will do their losing animations on the grid paper as "Tie" appears on the screen.

However, if the current record is broken while getting the same score for both variants, it counts as a new record even though no one won, as the screen will say "Tie" after the "New Record" fanfare. This also applies to the other 4 Player/Duel minigames with a record system.