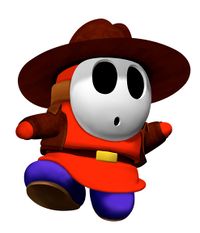 Does anyone Know which game featured this Shy Guy? Dry Bones 13

Mario Party 4. His get up is stereotypical Indiana Jones-style adventurer's clothing. -- Son of Suns

Should Shy Guy be in the Minor Underdogs, I think so. -- User:YoshiFan

I Totally agree. After all, he is in MOST games. User:maxlover2

How is this article a stub? - Ultimatetoad

the section is. we just don't have a "Section Stub" Max2 (talk)

We do? How do you place it, I tried sectstub, the usual activator. -- Sir Grodus

It's SectionStub.IS the section a stub though? Seems full to me. - Ultimatetoad I

RAP... Or I'm mistaken, because I saw a image of a Shy Guy in SMRPG

Now the article has a little section of SMRPG. Check it.

Do generic enemies realy need a relationships section? I thought that that was pretty well covered in the alleigances section... - Ultimatetoad

It's because Shy Guy has appeared as a character a few times, or a single one appears, giving it more personality. Or something like that.

Hey, do any of you know the name of those weird ghost-like shy-guys than appear in Level 2-5 of SMW2, "Watch-Out for lakitu"? They appear during the train section. Gofer

This quote is well, Sad. Anyone have a better quote?

I noticed that the Petal Guy page has been erased.Is this a bad glitch,or a user's prank?Well, can somebody please re-create it?

But when I searched Petal Guy it said "Erased".

There is no page titled "Petal Guy". You can create this page.

This message? This doesn't mean that the page existed. Sysops can restore any deleted pages, but I can't restore Petal Guy, because apparently it never existed. - Cobold (talk · contribs) 16:52, 10 March 2008 (EDT)

Oh,I get it now.But what I'm trying to say is that it should be created because it's a link to Shy Guy and this page has been accessed a million times.This is bad for MarioWiki.It should be deleted from the page,or created.

From the Swedish Wikipedia, on the Shy Guy article:

The Shy Guys' leader, knows all of Mario's attacks.

I've never heard of a Shy Guy called Shyrio, does s/he exist?--LordVoldemort

Oh, my, no answer in a month! --LordVoldemort

The only Google results for "Shy Guy Shyrio" are the Swedish article and this discussion. Either it's a name in Swedish translations or it's fan-made. I guess it's the latter one. --Grandy02 13:14, 3 July 2008 (EDT)

I removed this little bit from the appearance section. "or if they are actually even masks" as the section later states his MASK fell of and Luigi saw his face.--Luigibros2 22:54, 12 December 2008 (EST) P.S. I gave parts of the article a little uplift like them.

I was playing Mario Kart Wii when I noticed a cyan shy guy. What's up with that?

In Daisy Circuit, spectating you as you race. They're in the small town area. That's all I know, but I guess they're in Mario Circuit as well.

Cyan Shy Guys also appear in Mario Tennis Open at Mario Stadium in the audience, along with pink and yellow ones. Just cyan and pink appear on Wario Dunes, waiting on the sides of the court.

I was on the Shy guy page and noticed that the Shy guy page was in the undead category. Should Shy guy be in that category??I don't think so because there is a species of shy guy called Boo Guy. Blitzzy (talk)

Um... I don't think anyone has answered me for like 4 weeks.Blitzzy (talk)

Some people don't get their answers answered for years. But the reason Shy Guy is in that article because Ghost Shy Guys appeared in Luigi's Mansion, and those Ghost Shy Guys are covered here, which is why the Undead category it here. Hello, I'm Time Turner.

They actually don't appear to be covered here at all, but at Shy Guy Ghost, so there's no reason this should be in the Undead category. There's also a Luigi's Mansion navigation template at the bottom of this for some reason even though there is no section on Luigi's Mansion. Should that and the category be removed?--vellidragon 23:26, 1 October 2010 (UTC)

Someone must have split Shy Guy Ghost but forgot to remove the template and category. Hello, I'm Time Turner.

But it's still in undead. Should We change it?Blitzzy

When I was playing Super Paper Mario and I noticed that Mimi's vase had Shy Guys holding it. Should it be on this page?

I think that should be in a new section. Despite Shy Guys not appearing in Super Paper Mario, like you said, Mimi's vase had Shy Guys holding it so I guess we should put that in the History section or the Trivia. However, I will mark it as a talk page question.

I added it to the History (avoid resorting to Trivia sections as much as possible when adding info - even cameos can be put in History sections). - Walkazo 12:31, 14 June 2011 (EDT)

I saw the banner at the top of the page requesting more information. That has been there for months. What exactly needs to be added? If it is for a certain section, it should be added there. Slightly confused,
GG445

I don't think Shy Guy is unlockable in Single Player Mode in Mario Kart 7. My brother unlocked Wiggler and Daisy while playing with me in said game. I think unlocking anything period is available in Mario Kart 7, I think I should fix that. -Shroom64

In MK7, Shy Guy's name is Masquito. Where do "Carinha Timido" come from? Do SG has two names in Portugal? -Arz EDIT: Asked to a Portuguese friend. That apparently their brezilian name. Is there a Portuguese NOA and NOE section for the name in other language? -Arz

Can we change the infobox image to Mario Party 9 artwork? That's newer and has more quality.

I think the part about Shy Guy's mask possibly being his face (Although that is the case with bandit) should be removed. His face was shown in a Game Informer magazine(Game Informer is an official and legit source). Also, I think Shy Guy's real face should be added to this page. John Roberts

Never mind, I was a newbie when I made that comment. Well anyway, am I the only person who has looked closely where Shy Guy's face should be, and I saw something. I saw a little black nose. Believe me, just pause at the moment he loses his mask and look very closely (ignore the white, that's just part of the pillar in the background). KoopaGuy (Talk) a.k.a. ShyTroopa or JohnRoberts 22:11, 12 February 2013 (EST)

What image are you talking about?

Isn't it better if we split up the shy guy species (the red, blue; yellow green, etc...) and the shy guy character (the one that was playable in Mario Party 9, Mario Kart 7, Mario Kart 8)?

The problem is there is no confirmation that there is one singular Shy Guy character. MarioComix (talk) 19:32, 2 June 2014 (EDT)

Is there confirmation of one single Toad?

I care. I read it, but I had trouble finding romanizations of "Hei-ho", but I often found "Heyho". Was about to say that the romanizations in file names also amount to "Hey-ho".

So, anything on the Shy Guy MK8 models? Because I believe we were owed all the colors of Shy Guy in models, and yet you guys didn't take the time to use the Models Resource link, the Steam workshop by Spacekitty, or even this:https://www.yobi3d.com/q/shy%20guy. We deserve to have these Shy Guy models done by the books. Please finish the job.--Hamshamcart (talk) 17:14, 30 December 2018 (EST)

Firstly: They don't have separate models. They're retextures.
Secondly: It isn't imperative, as not only are they the same model as each other, but they're the same Shy Guy model as in most other recent games.
Thirdly: Additionally, data-based model renders are only one manner of capturing an image, and are never accurate to how they appear in-game, due to the games always having some sort of special lighting/filtering going on.
Fourthly: Don't be whiny.
Fifthly: Don't beg other people to do it. If you can't expect yourself to be able to do something, don't expect everyone else to be able.
Sixthly: Other people have lives too. We're all human, and each have our own problems, like my current struggle with depression.
Keep these things in mind. Doc von Schmeltwick (talk) 19:44, 30 December 2018 (EST)

Yeah, you're right Doc. That yobi3d site had models of Blue and White Shy Guys (The latter of which's modern design is also seen in Mario & Luigi: Bowser's Inside Story + Bowser Jr.'s Journey aiding Fawful and the Sniffle Thwomp like in the original.), and that zip had the other colors and yet your depression is holding you back from those minions in need. I have my problem of anxiety and loneliness, sometimes depression. Hopefully, the job would be done by the beginning of next year, despite that these models are "retextures".--Hamshamcart (talk) 21:41, 30 December 2018 (EST)