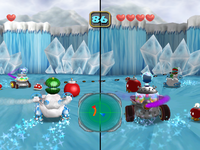 A battle in Snowy Slope

Snowy Slope is a battle arena in Super Duel Mode, an optional mode from Mario Party 5. According to the in-game description, it takes place in a circular, icy, mountainous arena during a snow storm. It is one of the few battle arenas to feature a unique hazard (barring Random Ruckus): the ice causes the vehicles to lose traction unless they are equipped with either the Lakitu Cloud, Spiny or the E. Gadd Jet tires. As with all arenas, except Random Ruckus, it can be played only on Vs Mode.