From the Super Mario Wiki, the Mario encyclopedia
(Redirected from NES)
Jump to navigationJump to search

It has been requested that this article be rewritten. Reason: Needs general reorganization

“Now you're playing with power!”
—Advertisement slogan for the NES

The Nintendo Entertainment System (abbreviated as NES) is a third-generation home video game console created by Nintendo as the western counterpart of the Family Computer (also known as the Famicom). It was released in the United States and South Korea on October 18, 1985, Europe on September 1, 1986, and Australia on July 1, 1987. The original model of the system is a complete redesign of the Famicom, featuring a gray and white color scheme, a covered slot on the front where cartridges are slid into, and detachable controllers. The system contributed to revitalizing the American video game industry following the video game crash of 1983, due to its software quality control through the "Official Nintendo Seal of Quality" and toy-like peripherals.[2] Combined, the NES and Famicom sold 61.91 million units before being discontinued in 1995.[3][4] The system vastly outsold competitor video game consoles, such as the Sega Master System and the Atari 7800, as well as home computers like the Commodore 64.[5]

The Nintendo Entertainment System was bundled with Super Mario Bros., resulting in it being the console's most successful game. For decades, Super Mario Bros. was the highest-selling video game ever, with 40.23 million copies sold, until Nintendo packaged Wii Sports with the Wii. Eventually, Super Mario Bros. 3 was released in the USA, and it became an instant hit, making five hundred million dollars in less than twenty-four hours.[citation needed]

In America, the NES was sold in three packages: 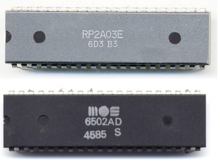 The NES/Famicom hardware consists of 2 kilobytes of onboard RAM, a custom second source MOS Technology 6502 based processor (called the Ricoh 2A03 in NTSC regions and the 2A07 in the PAL regions) which has a built-in sound generator on-chip and is used as the main processor. The Ricoh 2A03/2A07 contains 5 channels of sound: 1 triangle channel, 2 square wave channels, 1 noise channel, and 1 DPCM channel for playing samples from memory. The Ricoh 2A03/2A07 is essentially the same as a regular 6502, but with the binary code decimal mode removed.

The video generator hardware is the Picture Processing Unit (PPU) (Ricoh 2C02 "NTSC"/Ricoh 2C07 "PAL") which is responsible for generating the sprites and background images onscreen. Graphical capabilities, extended RAM, and even sound capabilities can be expanded with the use of memory mappers like the MMC2, 3, 4, 5, and Konami VRC6 among other mappers. For instance, the MMC5 adds 2 extra pulse wave channels and another Raw PCM channel in addition to the main 2A03/2A07 channels; the Konami VRC6 adds a sawtooth wave channel and 2 extra square waves and the VRC7 adds FM Synthesis capabilities which are based on the Yamaha YM2413 OPLL FM Synthesizer and are a derivative of the OPLL chip.

An expansion port is located underneath the console. However, no accessories were used for it. Although the Famicom Disk System was planned for a North American release and if released it would have used the Expansion Port. However, the redesigned NES-101 Top Loader model lacks the expansion port entirely.

Biederman Design Labs Research & Development was working on a handheld NES console called the Nintendo Express, but it never got released. Almost no screenshots were taken of it.[6] On the source video's comment section, a YouTuber by the name of Rick Gordon said he worked with Paul Biederman on occasion. He also said there was a version that had a crosspad. He went on to say that Paul went directly to Nintendo, who would not approve of the system, due to the upcoming Game Boy. He lastly said that because of this, Biederman Design Labs went to Galoob who looked at it, but the toy company did not want to enter another legal fight with Nintendo. 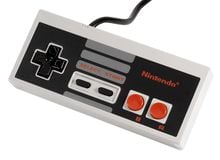 The later "dogbone" version of the NES controller which is included with the NES-101 Top Loader models.

The NES controller is the basic controller that comes with the console. It has four buttons and a directional pad on a brick-shaped case.

are stationed on the right with the

in the middle. The D-pad, first used on the Game & Watch to replace bulky joysticks, are on the left of the controller.

There were various versions of the NES controller. Nintendo released the NES Max and the NES Advantage, the latter of which had a "slow" button and both of which featured "turbo" buttons which, when held, would represent a button being pressed repeatedly. Nintendo later released a different form of the NES, which used a "dog-bone" design instead of the brick design, which looked a lot like Super Nintendo Entertainment System controllers. This design combines elements of the Game Boy and the Super Nintendo Entertainment System controller.

Unlike the Famicom, the NES does not have any audio controls (volume slider and microphone) on the second controller. Instead, the

buttons are available on both controllers, making those practically identical. Another difference is that the NES' controllers can be extracted, while the Famicom's cannot.

The NES Zapper was a light gun accessory used for only a small number of games, the most notable one being Duck Hunt. The first version of the Zapper to release was the gray one, but since a soldier mistook it for a real gun,[7] Nintendo re-released it in orange.

The Power Glove was a handheld glove controller that used hand movements as a controller via conductive ink. It also had a keypad that defaulted certain buttons to certain hand movements. Under it featured the normal buttons on the NES controller. It sold poorly and was criticized for being imprecise. It was featured in the movie The Wizard. 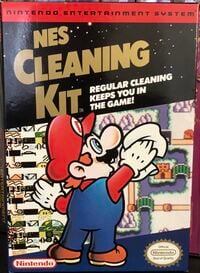 Over time, pins inside the NES and game cartridges would get dirty. Nintendo released an approved cleaning kit to improve the condition of the contacts so games would play without interruption.

Announced on July 14, 2016, the NES Classic Edition (known as the Nintendo Classic Mini: Nintendo Entertainment System in Europe and Australia) is a smaller version of the Nintendo Entertainment System and the first entry to the Classics series. It was released in Australia on November 10, 2016, and in the Americas and Europe on November 11, 2016.[8] Unlike the original NES, the NES Classic Edition does not support cartridges, but rather features 30 games pre-installed, including Mario games such as Super Mario Bros., Donkey Kong, and Dr. Mario. A version for the Japanese Family Computer, the Nintendo Classic Mini: Family Computer, was released in Japan on the same day and includes a slightly different software line-up than the NES Classic Edition. 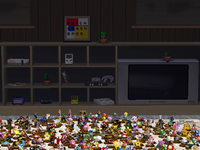