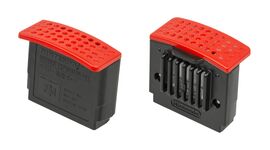 The Expansion Pak is a RAM expansion for the Nintendo 64 which adds four additional megabytes of RAM to the console while in use, increasing the total amount of RAM accessible to eight megabytes. It was released in a standalone package in late 1998 in Japan. The Expansion Pak is added to the console by removing the cover marked "Memory Expansion" in front of the cartridge slot and inserting it into the slot underneath, replacing the system's pre-installed Jumper Pak. It was originally intended to be used with the Nintendo 64DD, with its games planned to require the Expansion Pak to be played, but after the failure of the disk drive it was instead used to enhance select Nintendo 64 cartridge games.

A rumor states that Donkey Kong 64 required the Expansion Pak as the result of a memory leak or game-breaking bug, reinforced by a video created by former Rare employee Chris Marlow. However, this has been denied by Donkey Kong 64 developer Mark Stevenson, who suggested that the rumor was a byproduct of the conflation of two separate stories involving the Expansion Pak and a severe bug, respectively.