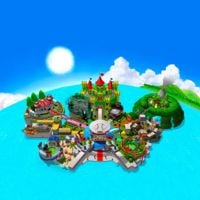 The overhead shot of the Baseball Kingdom during the day

The Baseball Kingdom is the island where Mario and his friends meet for their baseball games in Mario Super Sluggers. Lakitu mentions that Princess Peach built this island so her friends could play baseball, except for Wario City, which was built by Wario instead according to the stage select description. Bowser and Bowser Jr.'s stages were also not built by Peach due to not originally being part of the Baseball Kingdom. There are a total of nine playable stadiums that make up this locale, which include the following:

Because of the day/night feature, most stadiums can be chosen regardless of the time of day. However, there are certain stadiums that are only available at a certain time of day prior to selecting them. The stadiums that require the night setting are Luigi's Mansion and Bowser Castle. The stadium that requires the daytime setting is the Bowser Jr. Playroom.