Expert (known as Normal in the British English version) is the second course in the demo version of Puzzle & Dragons: Super Mario Bros. Edition, unlocked by clearing Intro once. It is a basic, underground level. When the player selects this course from the menu, the game provides a tutorial of the battle mechanics.

In Expert, players can choose between two teams consisting of either Boo Mario (level 30) and a Fire Bro, a Fire Piranha Plant, a Cheep Cheep, and a Bony Beetle (all level 25); or Ice Luigi (level 30) and a Green Koopa Troopa, an Ice Bro, a Blue Magikoopa, and "Red Koopa Troopa & Cheep Cheep" (all level 25). The player's helper is the other brother, but with the same power-up as the one they selected.

The player has only Fire, Water, Wood, Dark, and Heart Orbs on the Orb field. 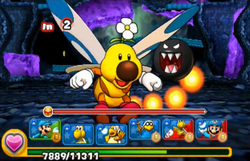 The boss battle of Expert.