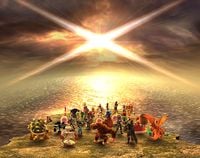 The Isle of Ancients before being destroyed

The Isle of Ancients is a place in the Subspace Emissary, in Super Smash Bros. Brawl. Although never appearing in the game itself, it plays a great role in the Emissary. It is home to several R.O.B.s, led by a single R.O.B. known as the Master Robot.[1]

After Ganondorf takes control of the robots on the island, he forces them to detonate several Subspace Bombs at once. He does this so as to transport a Subspace Gunship through to the World of Trophies. Later, after the defeat of Tabuu, a shining "X" appears in the sky where the Isle of Ancients was; it did not return to the world as a side effect of the detonation of the many Subspace Bombs at once.[1]

Isle of Ancients coverage on other NIWA wikis: