We have sad news in this mini update section: two pieces of it. First off, as the Awards are over, we won't have much need for Anniversary Announcements so they have gone for a bit. And finally, Lumastar has been fired from the New Articles position for not submitting three times in a row. So hopefully, one of you readers may do it instead.

Hello 'Shroom readers from all around the world, and welcome to this month's marvelous Monthly Report section. I have a concern, and that's dealing with Spambots on the forum. They get on my nerves with their random posts, to the point that I think they could possibly get a ban. Yes, I do report posts from Spambots. Enough ranting. I will be using more specific times for when I get the statistics instead of rounding the times to 5 or 0. Now let's go to the fun part, the part you all like, or maybe don't like (I still don't have a SOTM award yet.), the Tables of Time with the Statistics of Time.

Credit goes to Stooben Rooben (talk), Super Mario Bros. (talk), and Paper Yoshi (talk) for the table coding (I based this on Stooben's coding, which was later modified by SMB, and Paper Yoshi when they wrote this section.).

Hello 'Shroom readers, and welcome to another edition of Featured. Unfortunately there's not a lot to really report here, but I'll still give it to you anyhow.

No new articles have been featured in the past month.

There is one ongoing Featured Article Nomination.

Two new articles have been unfeatured in the past month.

There are no ongoing Unfeature nominations. 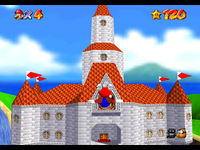 Princess Peach's castle, as it appears in Super Mario 64. Wing Mario is in the foreground flying towards the castle in the background, with 4 lives remaining and 120 stars collected overall.

We should all know how to put an image in an article, but what about adding a caption? Striking a good ratio of caption info to image is important, otherwise the whole thing will look unbalanced and sloppy. For the sake of the simplicity of this tutorial, I won't put links to pages in my captions, but you should link to other pages if needed in your actual captions.

Let's look at the two captions I've provided for the same image of Peach's Castle from Super Mario 64. The caption on the left is not enough, obviously. Depending on what your subject is, you need to give enough information to give the reader a basic understanding for where it fits into the article. Usually, that means describing what your subject is and what game it's from, if the item in question is on a page like Peach's Castle where you'll have many different versions of the same item.

The caption on the right is too much. Notice how it describes not only Peach's Castle, but it also references Wing Mario, and the scores and stats and whatnot. That's way too much information, and it'll confuse your readers about what they're supposed to be reading about. All you really need to talk about is what the page is about, in this case, Peach's Castle.

The main thing that happened on the forum over the past month was definitely the Mario Awards, though they're usually talked about in other sections. If you missed the ceremony, you can see the threads for each of the awards categories here:

Even if you don't care about the results, the presentations are really worth looking at. A lot of work went into them.

Thread of the Month

August's esteemed Thread of the Month award was a hard one to give because there were so few good threads so many to choose from. The Awards threads were disqualified because they're too good for this.

After many hours of deliberation, the team of lawyers I hired to do this part for me decided that Magikrazy's (Magikrazy (talk)) Petition to ban questions thread received the all-important(?) Thread of the Month award, as it made a brave stand against the ongoing phenomenon of Ask Threads. Magikrazy's first post included an impassioned plea to end it for good - though it seems to have fallen on deaf ears. This also inspired a number of copycat threads, throwing us back to the good old days of Fad Lists and whatnot.

Ironically enough, π's Incredibly Original Ask Thread: Serve Me Some π And Questions Edition tbh by Pi (RandomYoshi (talk)) was this month's runner-up (despite being created at the end of July). Nabber's (Nabber (talk)) the sonic the hedgehog twitter account was an interesting thread as well.

"make sure packy keeps his hands off my company" - Ultron's (Neptune99 (talk)) final wish upon retiring from the Super Mario Boards (again).

"Rosalina is a space dolphin. You know it's true, just look at her up special and then look at real life dolphins doing that, but with water." - Lyn (Icemario (talk)) is insane.

"I thought I was the one who's insane around here." - Mario Party Δ (Bazooka Mario (talk)) thought wrong!

"if youre drinking milk regularly than youre probably a big enough masochist to enjoy the coming diabetes and kidney stones" - Important health advice from Uniju (Uniju :D (talk)).

For what I think is the first time ever, no Mafia games are currently ongoing. In terms of games that finished:

And that's all for August! See you in October, when we discuss September!

Hello, readers! I'm your Spotlight manager and Pipe Plaza Director, Yoshi876. Welcome to Retro Feature, a section in which I delve deep into the archives to bring you the best blasts from the past. This time I bring you a section from Marioguy1 (talk)!


Marioguy1 joined the MarioWiki on 10th June 2009 and made his 'Shroom debut during Issue XXXIII, writing Featured, a section that he would go on to write a further 16 times. He would go onto write several other sections in Pipe Plaza: NIWA News (three times), Links (one time), Tip of the Month (one time), as well as co-director and director notes of Pipe Plaza. Yes, Marioguy1 was one of my predecessors in directing Pipe Plaza. He was my predecessor in two other things! He submitted a 'Shroom Spotlight, although this unfortunately flopped, and he also contributed eleven Character Reviews. He also did other sections like Fading into Obscurity, Activity Announcements, Mafia Game, Promo Character Panel and various special sections that were contributed throughout The 'Shroom's history. He also rose to fame on the wiki as he rose to the rank of Administrator whilst here.

However, you’re not here to learn about the history of Marioguy1, you’re here to a view a classic section from issues gone by, so without further ado here is Marioguy1's Fading into Obscurity from Issue XLIV.

Welcome to the 'Shroom debut of Banjo 'N' Gutseh's Late-Night Actually Legit Interviews! We'd of course like to thank The 'Shroom for picking us up, and to celebrate our debut, we've conducted a (sort of...?) surprise interview with a recently returned user, Pi! In this episode, we talk about his return, the future of internet culture, and the possibility that Sweden, this website, and probably everything, is a meme. Enjoy the irc goodness below!