From the Super Mario Wiki, the Mario encyclopedia
< MarioWiki:Featured images
Jump to navigationJump to search

Nominations of images that were featured in the past are found here.
Add following nominations until there are 20 in the page.

*rolls eyes* About how many pictures nominated are there now that has Luigi getting beaten up, looking stupid, or the like? There's that avalanche one, Luigi's mansion, the Mario Party beach image, Sweet Basket, the Melee picture (IMO), and now this one. I think Nintendo maybe just likes seeing Luigi having all the bad luck. BabyLuigiOnFire (talk)

What "Melee picture"? Also, the reason why Luigi is like that in all the pictures is because that's the sort of character Luigi is. Cowardly, weak, etc. Even in the Mario Kart Wii intro, he's seen getting hit by a blue shell right as he gains first place. He isn't what you would really call "Glorified". Garlic Man (talk)

I had wanted to nominate this picture, but I had a feeling it would be put down because of "a lack of background" and some variation of "luigi has bad luck." (And BiscuitLagoonOnFire, Luigi didn't look stupid in the Melee group art. He just looked like a wacko. But not stupid.) LeftyGreenMario (talk)

^That's just IMO, genius. GM: I don't think Luigi's that weak. Even if he was weak and cowardly, I really don't think he deserves it. BabyLuigiOnFire (talk)

Is this going to turn into a war just like Avalanche!? LeftyGreenMario (talk)

No. Avalanche! only has one vote. KS3 (talk)

Very funny. Stop replying to old comments already when referring to a situation that didn't even exist when the comment was made. Time Q (talk)

Yeah right, that was a few hours ago when I nominated the Avalanche one again as a new fresh start, but everyone is voting oppose. If people actually come to the support side, it might come as a war again. KS3 (talk)

@Gamefreak75: Such an "incorrect" mouth for squids and especially octopi is very common in Japanese popular culture. Look at Gooper Blooper, Gunion or Template:BP, for example. --Grandy02 (talk)

LOL, Grandy, I already knew that, I just wanted to sound "scientific". The added info was for the lulz as one might say. Gamefreak75 (talk) 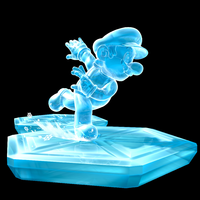 Don't worry about your memory; it's fine. I even said that it was nominated before in the vote. The volley-ball image and the Super Princess Peach image were taken down once, but are now featured. Just because it was passed down before doesn't mean it can't be featured. LeftyGreenMario (talk) 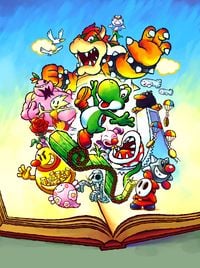 Why is it called "fartwork"?? Mario jc (talk)

Lol, that was intended LeftyGreenMario (talk) 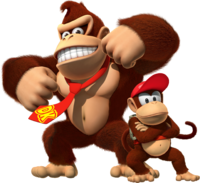 Platitudinous (talk) @MrConcreteDonkey: That is so true! Donkey Kong Country for GBA was my first video game and is still one of my favorite games today. I'm glad they're making another one now.

@BabyLuigiOnFire: How can you KO Donkey Kong in Mario Kart Wii? MrConcreteDonkey (talk)

I make his life miserable in Battle Mode and VS Mode. He sounds funny. That's all. BabyLuigiOnFire (talk)

@DonPianta: What? They have A LOT to do with Mario. They both appeared in several Mario games, and they both are part of the Donkey Kong series, which is closely related to the Mario series. Fawfulfury65 (talk)

Pixlfreak: Donkey Kong isn't playable in Mario Sports Mix, Mario Super Sluggers, and Mario Kart Wii!? I didn't know that! Maybe you mean mainstream platformers, but when is the last time Donkey Kong made a major appearance in a mainstream Mario platformer? Mario vs. Donkey Kong (or the other way around) doesn't count. LeftyGreenMario (talk)

Also, he isn't playable from Mario Party 5 on. Pixlfreak (talk)

donpianta: he is playable in the all 3 of the games you just mentioned....Lu-igi board

Donpianta didn't mention any games. Also, I recently discovered that Mario isn't playable either in those three games. LeftyGreenMario (talk) 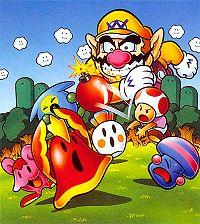 Also, *alliteration alert* what's wrong with Wario? He's almost 10 million times larger than Toad (he's lingering over the round thingies and trees, how did he get so large?). Also, why the super silicon graphics chips is he smiling when his minions are getting defeated? I thought Toad was the smiling smile simile smileybutt (and Toad is not even smiling!). Also, Wario is fat. *hyperventilates*. Sorry for my rant. Don't take it personally, supporters and nominators. BabyLuigiOnFire (talk)

@Booderdash: Simple-designed characters, objects with faces and other things of "cheerful" nature are commonly seen in the Mario series. I don't think that makes Mario games look like being made by a 2nd grader. --Grandy02 (talk)

Yay, this is going to be the next featured image... LeftyGreenMario (talk)

I uploaded a new version of the image found at MobyGames. Do you think it looks better now? --Grandy02 (talk) 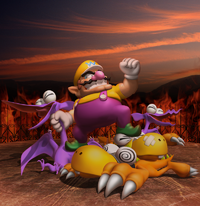 after a previous argument I was involved in, I would like people to focus on the image quality, NOT there hatred of Wario.
The preceding unsigned comment was added by Lu-igi board (talk).

How can those dinosaurs support Wario? LeftyGreenMario (talk)

Same reason the ground can support Chunky Kong and the other fat gorillas in that other pic. Booderdash (talk)

Hm. Actually, Wario isn't even standing on the dinosaurs. He was just posing for a picture, but the artist decided to draw those defeated dinosaurs around Wario to make Wario look more awesome. LeftyGreenMario (talk) 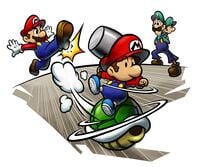 You know what? This image should be on a 3DS. O.O BabyLuigiOnFire (talk)

That would be so awesome BLOF. This is really one of the first images I supported. Superboo922 (talk)

Why does Baby Mario have a HAMMER while on that shell? That doesn't make any sense. Booderdash (talk)

Yah, I agree with that. He NEVER carried that hammer while on a shell in Mario & Luigi: Partners in Crime. Maybe there's an enemy out there he REALLY doesn't like. BabyLuigiOnFire (talk)

Its probably beta. I remember a beta attack thats a Spiny Shell that the babies used that needed hammers... Booderdash (talk)

This picture is odd.I cant figure out what that shadow is... Rooster17780 (talk) 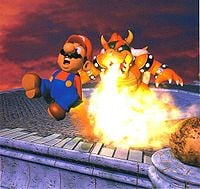 Why is Mario putting his hands in his pants? Booderdash (talk)

Because his overalls burn, and it's hot? Also, about "dolls", the image simply shows what 3D models in the Mario series looked like back then. --Grandy02 (talk)

I don't know how this isn't high quality. And how does Mario look 10? I don't know of any 10 year olds with mustaches. Fawfulfury65 (talk)

Ok, how is this low quality? I really want to know why. Just because they look like dulls doesn't mean its low quality, that's just how it's drawn. Fawfulfury65 (talk)

Well, if you look close up, you can see some of the pixels. At least I can see it. And remove the mustache and he looks ten. The angle of his lower left mouth isn't with the rest of his face. My 12 year old friend can draw better than that. Off topic, but I had a little mustache when I was 10. Booderdash (talk)

You can see some of the pixels in just about any image if you look really close to it. So that doesn't really call this image low quality. Fawfulfury65 (talk)
The image is made up of pixels, so of course one can see them. And you could remove Mario's moustache from any artwork to make him look "younger." --Grandy02 (talk)

Sorry for asking, but what game is this? And Booderdash has a good point. Superboo922 (talk)

Looks like Bowsers breathing fire from his NOSE... Booderdash (talk)

Yay. ANOTHER Bowser image is going to be featured because "he is awesome". Hooray for fan voting. LeftyGreenMario (talk)