Hi. So this is my talk page. Here are some rules.

That's all my rules. I would say some sort of catchy greeting, but I don't have one.

Hi, LemmyKoopafan! I am yoshi301. I am just saying that I agree with you %100 about Bowserjr and how the stupid koopa replaced the koopalings. The koopalings are awesome! User:Yoshi301/sig2

Yeah, you're right. And by the way, thanks for being the first one to say something on my talk page!

Your welcome! Um, next time, so I can see it, an you put your comment on my talk page? Thanks!

Oh, I forgot to say! I have become an active reader on LemmyKoopa.com. It is really fun

I just read Igyy Vs. The ghosts. Have you written anything else? (also, wahts your favorite tourist attraction? Mine is Either Lemmy's Drawing board, Mysteries, Funnies, or List of Baddies.)

I personally prefer Roy's Sports Hall, and I don't really like the Scribbles.

Interesting. Oh, are you going to make any more Iggy's and the ghosts?

Probably not. I need to pick up the pace on my work in progress. User:Lemmy Koopa Fan

this picture almost made me faint. The Koopalings are going to be in New Super Mario Bros. Wii!

hello my 1st favorite koopaling is iggy but 2nd is lemmy.-Nucleartaod24

Maybe that strange room you talked about a few months ago in Super Paper Mario DOES have something in it!Try using Tippi and flipping.YoshiTron

Yoshi! Hi Lemmy koopa fan, sorry if you thought I was stealing your poll, i just didn't see it. I Deleted my poll now. Bye for now. YellowYoshi127 (talk)

That's okay. Not alot of people pay attention when they're going through polls. Not even me. User:Lemmy Koopa Fan

I see that you have deleted that message from beow seow man and nucleartaod54.Did they get banned?
The preceding unsigned comment was added by Da Rock (talk).

Just curious, I have written a story for the Fun fiction. How do I lay out the e-mail

I don't really know what you mean by "lay out" but I think you mean send it to Lemmy. So to do that you need to just go to the top of the Fun Fiction page click on "E-mail Me!" and then write the story. Good luck! User:Lemmy Koopa Fan

Why did you tag a bunch of Super Smash Bros. pages for deletion? We cover the SSB series here. Also when you tag pages for deletion, you have to say why they should be deleted, either in the deletion template itself, or on the article's talk page. - Walkazo 00:55, 1 August 2009 (EDT)

Okay, I'll say my reason on the Talk page for Dark Link right now. But I think I'll just delete the tag on Whispy woods now cuz I guess it has something to do with mario if it's in books. Lemmy Koopa Fan

No probs, I personally liked the image but reverted my vote on the original when it had been there for too long so it could be deleted. TIMMY TIM

Just a question, have you ever taken the link from the "E" in Egg Yoshi on my Signature?

Just saying... if you could write the responces to what I write to you on my talk page, then I will get the "you have new message" bar thingy

Hey lemmy koopa fan I love your sprites I burrowed a few if you don't mind.

Yeah. I call it the Gifapedia

ps. By the way. I'm still a bit new on Lemmy's Land. Has he ever been this late for an update? This is the first one that I have something in the update and he's late for it!

I am curious, since I might not find out in a while, is the thing your submitting (you are goomba, right?) Wario and Waluigi world or something new?

On Lemmy's Land, I am Fred the Mole. Wait... who else would think that I was Red Shy Guy?

Thats because I just sent it in last week and on this update it will say "next update will contain work by..."

Whats LKF? Just Want You to know I'm A fan The Lemster (That's What call Lemmy) Too. I actually fantasize about him. Also I have an account. I'm AJ Koopa. I haven't submitted any thing yet but I am planning too. See Ya LK Fan. P.S. Loved your animations especially the what is love one Mecha-Boss Unit

I was wondering if you'd like me to delete your proposal so that you can go ahead and merge Rope Snake with Lucas right away? As I said in the comments section, it's already Wiki policy to merge the attacks with their users, and Rope Snake (among others) simply fell through the cracks. If you'd still like to see your proposal go through, that's fine as well - the important thing is that those forgotten articles will be merged sometime soon! - Walkazo 17:46, 2 September 2009 (EDT)

Okay, the proposal's been removed (Marioguy1 already deleted his proposal), so you can go ahead and merge those articles now. Once again, thanks for pointing out this Rope Snake oversight (and by extension, the other unmerged attack pages as well). Talk to you later! - Walkazo 18:09, 2 September 2009 (EDT)

Fortunately, merging Rope Snake will be easy. All you have to do is copy everything on the Rope Snake page and move it to the "Special Moves" section of the Lucas article. Just create a new "Rope Snake" header under the PK attacks and before the Final Smash, and paste all the information there. Then, replace the content of the Rope Snake page with "#redirect[[Lucas#Rope_Snake]]". If you have any more questions, feel free to ask me! - Walkazo 18:31, 2 September 2009 (EDT)

I sent in a mysteryto Lemmy's Land and Lemmy wrote back to me. Why didn't he update if he has been online?

Hello User:Lemmy Koopa Fan! I've seen your webpage, it is really cool, especially that animated GIF thingy. You have founded a LOT of GIFs, I even saw some I could not find at all!

Hi! Lemmy updated. I wrote "Iggy Creates a Website" and "The Hide and Seek Murder"

I also wrote a Bio for Fred the Mole. For some reason its not new anymore. If you want to read it, you have to go to larry's Bios under F.

Oh, I forget to say. because of the new wiki rules, you and I have to delete everything we said about lemmy's Land. If you don't believe me, go to the main page under mario Wiki Community and click on "theese rules". i also made a proposal about this. You can Support it if you want.

I am bored right now

Heres an Animation for your animation thing.

Yeah, So I can't think of anything to say either

Stupid me... I FORGOT how to beat the Fawful express! Although I think if you flame the green tunnel guy thingy it will make that die faster so you can attack the FE before you fall through a bridge. Also, LEMMY KOOPA RULES!!! and you can use the two sprites on my sig for your animation thingy. Sorry I can talk a lot. Fawfulfury65 hi lemmy koopa i just wanted to say you made a mistake you put 12 best 1 worst and lemmy is your fav and 1 is there worst do you get what i mean Bowser jrs number 1 fan ill look for my sig !

lemmy koopa is in new super mario bros wii(wanna be friends) hey want to be friends also i checked your page you hate BJ lol your funny!

D I like lemmy too hes so cute see you around too!

I think this is good news...[edit]

Hi Lemmy Koopa Fan! I decided not to retire for now. being on the wiki is far too fun (even though Lemmy's Land is more fun)

You earn 100 coins, for Waluigi being your favourite character, and the GIF thingy.

Here's your Shine Sprite. You have 110 coins left. 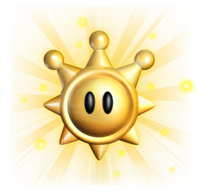 Hope, Piantas don't get mad at you for owning this.

If I find a gif that you don't have I'll post it here. -Koopa Troopa the fourth

Sit down and Have a Userbox[edit]

Ya know ya have a picture of Bowser Jr. with a baseball and glove? The first time i saw that picture I thought he was holding a half-eaten sandwich.

Have you ever considered making a userbox tower on your page? It would be cool.

yeah. By the way. Have you been following the ultimate character tournament? Morton already lost (wah!) so I guess im for Ludwig now. Also, what are the codes for your userboxes?

whoah! its gone! I havn't even noticed!

Too bad. I liked it. If I ever needed a sprite for a userbox, that was the first place I would go.

Hi From Your Good Friend Pahud[edit]

I think that indeed deserves at least a week long ban. --

Hi, Lemmy Koopa fan! Long time no talk! I'm not sure if you saw the link on Lemmy's Land (It was on the main page for a while) but I have a new blog! Its sort of like Lemmy's Life in a way, except its with Morton. I thought you might like to check it out! Koopas On The Web User: Egg Yoshi

Although I like most mario games I can't help but notice rather ugly characters. Take a good look at Wario sometime. Believe me you'll see what I mean.

If you agree with me drop by my page sometime and tell me.-Da Rock

The image of Fire Mario Climbing a vine, is Mario going up or down.?
The preceding unsigned comment was added by Paper Mario Kart (talk).

Your recent edit to the Rudy the Clown article is considered vandalism and is not allowed. Should you do anything of the sort again, you will be blocked. Mario4Ever

If you really want to resign, simply stop using your account. There is no need for you to break the rules and get yourself banned. Mario4Ever