WARNING: PAGE HAS BEEN BREACHED BY SEALS. IF SEAL IS FOUND, PLEASE TAKE EXTREME CAUTION, AS THEY ARE EXTREMELY GRUMPY TODAY. THANK YO FOR YOR TIME

Status: Sorry I've been away so long. Been busy with my personal life and whatnot.

Big News Guys! I signed up for the Shroom! From Now on I will be posting up Information on Rumours about the Mario series and if said rumours are true or not. Can't wait to get started!

They didn't get my request to join the Shroom. Sorry Guyz! I'll cheer you up with my funny captions below! If you liked them, leave a comment on my talk page.

If you haven't noticed yet I have just started to collect userboxes! Send me some Userboxes and post em!

I have rules about what you can say on my talk page. Here goes

1.No swearing though don't consider damn to be a swear though

2.Try to avoid rude commentary, I'm not a big fan of trolls

3.I would prefer userboxes to be sent to my talk page not yours but it's ok if you didn't know that

4.Avoid topics concerning Mr. L, The Argument Is O-V-E-R OVER!

5.If plan on using smileys or 1337 pleae tell me what they mean unless it involves swearing (See rule 1)

6. No Insulting DK, Luigi, or the Koopalings. If you do, my army of woodchucks, lead by Chuck Norris, will find and kill you.

7. Don't even THINK about posting something emo! Elmo is watching you......

8. Be nice and don't criticise me or others for things we may say.

9. Please post your username after commenting. It eels more civilized

10. You must know how to use a computer in order to comment on my page. ROFL!

I found out which video game character I am

You are smart, capable and self-sufficient, but nobody appreciates you. You know how to get the job done, but Mario gets all the credit for your success. One of these days it will be your chance to shine.

Any day I feel like it and am able to

I'M BACK YOU SUBNORMAL HALFWITS!!!

THE USER NAMED BOSS UNIT HAS CLONED MY PAGE! ALL FRIENDS AND RESISTANCE MEMBERS,STOP HER!

Boss Unit and I are no longer feuding.

4. Write for The Shroom

Welcome to the Weegee awards! These are special awards I give to Mario Characters! Here goes

Fattest: Wario (I don't need a reason for this; just look at him)

Tallest: Megaleg (I'll deliver this to Bowser because Megaleg is only a robot built by Bowser)

Most Likley to be kidnapped: Peach (She was recently kidnapped Bowser so I'll deliver this to Bowser and tell him to give it to peach)

Most Hotheaded: Angry Sun (Get it? Heh.)

Strongest: Donkey Kong (He threw me out his window and I was orbiting the mushroom world for 3 years! WOW!)

Scariest: Dry Bowser (I literally wet myself when I heard his voice in Mario & Sonic At the Olympic Winter Games)

Most Diabolical: Dimentio (The Shadow Queen only wanted to plunge the world into darkness, Dimentio wanted to destroy all dimensions!)

Most Mysterious: Shy Guy (I always wondered what's under that mask but I don't want to know)

Most Likely to have therapy: Wiggler (Gets angry all the time)

Best Metalworker: Smithy (He makes his own admirals)

Most Suited for War: Snake (What Did you expect from an m rated game character?)

Most likely to join the Ghostbusters: Luigi (If you don't know why, Jump off a cliff)

stupidest idea ever for a villain: Tanoomba (I laugh at the patheticness)

Best Userpage on SMW: ME! (No Reason)

Biggest Troll EVAR!: Aniit-Mario (We've done a good job of keeping him contained. Thanks to All my fellow Resistance Members)

Best Portrait Ghost: Bogmire (He is AWESOME! Creepy too *Shudders*.)

Best Retired User: Tucayo (We all loved his Shroom articles. If you didn't, Get a life *Now On Sale for 30 Wiki Tokens*.)

Best Fawful Impression: Fawfulfury65 and Fawful117 (CHORTLES to you guys)

Come on Users Take a chance! Click here and see what you Get!

If so, I want you on my friends list! Just Post your gamertag on my talk page and I'll send you mine! Hope to see you there :)!

Random Questions that could win you some Userboxes

1. Do you hate the Duck Huntt dog?

6. Do you beleive in Santa Claus?

7.Are you working for the Koopa Troop?

I FINALLY MADE A SIG!

The one, the only, Mecha-Boss Unit!

Mecha-Boss Unit has been hijacked by MBU and his army of edits! Derp.

Bowsers luma got me back!

I AM BOWSER'S LUMA!

“OK, I admit it! I stole the cookies from the cookie jar!”
—Mecha-Boss Unit, Talking to friends

“WHY ARE YOU SO HARD CONCRETE MAN!?”
—Mecha-Boss Unit, Playing Megaman 9

“You are now my slave! now DANCE MONKEY, DANCE!”
—Mecha-Boss Unit, Talking to his pet monkey

“Ow! My Groin!”
—Link, Legend of Zelda: the Abridged series

This Is where you have your chance to show off your artistic skills! Post A picture for the contest on my talk page. Winner Gets a Userbox and 300 Wiki Tokens

Here Are pokemon I would gladly trade

Any of the Regis (Regirock,Regice,Registeel,Regigas)

These are just characters I've cretaed for the series. hope you enjoy them

Doodle Bros: Crudely Drawn Copies of them Mario bros. Mecha-Boss Unit crated them for his fight with the marios. However, Because of a faulty program in the machine used to animate them, they cannot be in 2 seperate places. therefore, while playing sports, the doodle version of mario use the doodle luigi as a bat, a racquet, a golf club, etc. There shere the personalities of Mario and luigi and will mimic the moves of the Marios during battles.

Gamedroid-TF2: A model of the Gamedroid, Andorids based on Mecha-Boss Unit's favorite games. This Model is based on Team Fortress 2 Even though he doesn't actually have the game. In combat, this model rapidly flashes through the 9 classes playable though it mostly uses Scout and Engineer. It is deadly and a force to be reckoned with. MBU also modified the gamedroid to play for the MBU Terminators using the scout class.

Gamedroid-SSBB: A model of the gamedroid, Androids based on Mecha-Boss Unit's Favorite games. This model is based on Super Smash Brothers Brawl. Is fighting style needs no explanation. It typically uses Luigi, Donkey Kong, Captain Falcon, and Mr. Game and Watch. When in mortal danger it will automatically gain the ability to use a final smash. MBU also has modified it to play for the MBU Terminators using Ness

MBU-Combat Form: Mecha-Boss Unit in his battle armor. In this version, he looks like the sonic & Knuckles version of metal sonic but with his respective coloring of red skin, Green Eyes, and A white diamond on his forehead. Before any fight, MBU always goes into combat form.

VB Cruiser: A giant flying battleship shaped like a virtual boy. The VB cruiser houses the Polygonian emprie who are Mecha-Boss Unit's Worst enemies and are respnsible for the creation fo the fighting polygons, wire frames, and alloys from the SSB series. The inside of the Battleship is a red and Black Labyrinth. It is pilote by the self concious pilot program Pilotgon who is a part of the ship istself. The VB cruiser has a variety of weapons including Cannons, Gatling guns, and a lazer that turns anything it hits into a red and black wireframe that is blindly loyal to the Polygonians (However, Some People like MBU and his friends, are Immune to the effect of the laser and are just badly wounded). It has very durable armoring making it very hard to defeat in aerial combat. Thus, the Best way to take it out is to take out Pilotgon.

Gamedroid SH: A model of the Gamedroid, Androids based on Mecha-Boss Unit's Favorite games. This Model is based on Sonic Heroes. In combat, it usually uses the power forms of teams, especially team dark (Omega IS MBU's Favorite sonic character after allthough Black Doom gaining popularity among him). It is not to be taken lightly. MBU also has modified to play for the MBU Terminators using Big the cat.

File:MP3 ToadstoolTitan.JPG
Luigi Still Plays With dolls.
File:M.P.I.Q..jpg
One of these players thinks he's on who wants to be a millionaire.
File:DK64Crosshair.png
Donkey Kong did not heed the warning to GET OUT!!! Now he will suffer!

You are not a true Youtuber if you don't know who this is!

I reccomend that Rare needs to plan in advance!
File:Shadow queen.PNG
Q. What do you get when you cross peach and a goth? A. This
File:Zeus Guy.PNG
LUCKY CANDY!!!

And he found himself face-to-face with a Fire Sumo! 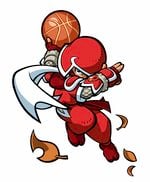 If this was made long with square... WHY ISN'T MALLOW/GENO IN IT!?
File:Star Haven.PNG
It's beautiful which means it must be destroyed

We fight foreigners to Bowser who's blood type is O-
File:Kretin.gif
The circus is on my page! can't you see their acrobatic skills? 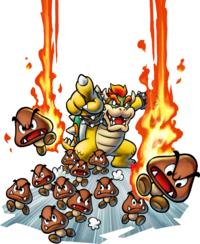