From the Super Mario Wiki, the Mario encyclopedia
Jump to navigationJump to search
Status: I'm back on The 'Shroom! 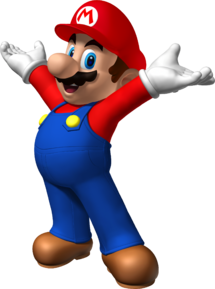 WELCOME TO MY USER PAGE!

Hello! My name is Mario304 and I've joined this wiki on September 5, 2008. I'm a big fan of the character, Mario and I think he's really cool! I'm a HUGE Nintendo fan and I think Mario is the best Nintendo hero ever! You can also find me on the Donkey Kong wiki as DK101.

I was reading about Paper Mario on Wikipedia until I saw this link to the Super Mario Wiki. I curiously clicked on the link and then I found myself on this wiki!

My opinion on Waluigi

He's Wario's brother, his favorite color is black, he loves Piranha Plants. His name is, Waluigi!

Waluigi is character only invented for spin-offs but is now one of my favorite spin-off characters. It'll be very cool if he was in a Wario series game with his brother, Wario.

I used to hate Waluigi but he's now one of my favorite characters because he's funny, has his temper easily set off and is a very evil character.

Waluigi should be in more then just spin-offs. He should be in an adventure game like, Wario and Waluigi: Superstar Saga! Get it?

Since Waluigi is now one of my favorite characters, I've replaced him with a character with gender problems, Birdo.

My opinion on Birdo

Birdo is my #1 hated Mario character. She's a boy who thinks she's a girl, she likes wearing a bow on her head and she's Yoshi's "girlfriend."

And that concludes my opinion on Birdo.

And now, here are my favorite Mario spin-offs:

Now that you know about my favorite Mario games, let's see my favorite characters. This list is even larger now!:

Here's my 10 favorite Mario villains of all time!

Mario games I have

Here are some ratings for all the games I've played:

Here is a list of all of the articles I have created, in order they were made.

"I HAVE FURY!!!" Fawful from Mario and Luigi: Bowser's Inside Story

"I lost, to a bunch of losers!" Wario from Mario Kart: Double Dash!!

"Master of dimensions, pleasure of crowds, I am Dimentio!" Dimentio from Super Paper Mario

Here are my subpages.

Feel free to use this.

userbox|border=black|mainbkgd=red|codebkgd=white|codecolor=red|code=Image:MarioMP8Artwork.png|40px|msg=This user is a friend of Mario304.

Thanks for creating this, Mario5x!