The 'Shroom:Issue 100/Fresh From The Past

Fresh From the Past

Don't be fooled by the title; this article is dedicated to the #1 idol herself \m/ (◕ヮ◕) \m/

Nico nico-nii~ Today's special issue is about everyone's favourite idol, Nico Yazawa! What? You haven't heard of her? She's a world famous idol! You're probably joking (and boy what a bad joke) but who cares, this section is about Nico! Her birthday is in a few days so you should get lots of presents and pray to your goddess and convert to nicoism if you haven't already so she can make the world happy. There are no other birthdays coming up, nobody important, nope. What? Some crocodile kid has a birthday? Why does that even matter, you should be focusing on Nico, not some crazed drunk! That's ok, if you give your life to Nico, I'm sure she'll forgive you~

Anyway, what should we talk about today? I wonder where Nico gets her ribbons from, they look pretty fresh.

booo this is boring get to the damn review already

NO THERE'S NO REVIEW TODAY ON ANYTHING, STOP ASKING >:( nobody likes you
I'd be happy to review Nico though, she gets 10/10 for everything, how could you hate the best idol on the planet?

Wait where are you going? Were you about to leave the page? No please stay :( I'll do a super special review just for you if you stay :(((( How about that one times & partners one? Yea? Ok fine, we'll do that one. Don't scare me like that again ;_;

So I guess I don't need no introduction, it's special issue time and of course your boy TFP has that one special section up (I hope people read them atleast :^) ). Anyway, you guys probably already know what I'm reviewing, we're just gonna continue off from last time and celebrate this 100th issue with an ol' time classic, Mario & Luigi: Partners in Time!

This clearly sums up the Shroob language in a nutshell.

Mario & Luigi: Superstar Saga was a huge success, it got hype on top of its own hype. Everyone was so hyped for that shit and wanted more, and thus, PiT was born in 2005, just two years after the release of Superstar Saga. I think they did a pretty fresh job with this game, and definitely was as fresh as Superstar Saga. I think this was like my first M&L game, and it was pretty cool how you could control four people. So anyway, we begin with the homeboy with funky glasses showcasing a time machine, and guess who with a few guests decide that they wanna head back to the past and relive their youth or some shit, I dunno, I wouldn't really wanna go back to the past, that shit already happened. I'd go to the future like some Marty McFly shit though. So they go back and shit goes down with poison mushrooms taking over the world...in the past. You know what that means, if they fuck shit up in the past, there is no future, so that means no more new games ;_; How does that shit happen? Like the past already fucken happened and you see these kids just pop up outta nowhere. I mean it's probably some alternate reality or something so they shouldn't really give a shit but that dumb bich fucked up by breaking the thing used to power the time machine, god damn, you gotta be really dumb to do that. It's like she wants to get kidnapped again - what an attention whore. Bowser didn't even do anything this time, he was just chillen man. And thus, the story begins with the bros. heading to the past and trying to save their Peach cause she got lost somewhere. Oh, and don't forget the BACK TO ADVENTURE guy, he makes everything swell. I know, it sounds really stupid and stale, but boy, once you play the game, I'm sure your view will change, just like every other Mario game with plots. 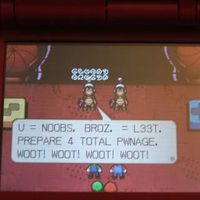 The greatest lines in video game history. Who translated this shit? They deserve a medal. Actually, they probably already got one; this game is centuries old.

As mentioned before, now not only can you control the main man himself along with shorty the pimp, but you can control yoshis island guy & you save this guy at the end of yoshis island guy all with one hand! That's a lot of people, but don't worry, its super simple, its just like using two times the effort you used in Superstar Saga. They do return a lot of elements from the previous game, such as Bros. Attacks, which we call Bros. Items now. My favourite one is probably the Copy Flower, I love just going hard in the paint and mashing buttons while stomping on someone. The Mix Flower is pretty cool too. We also see the return of Hammers, can't forget that shit, they're like in every Mario game. Seriously, try and name on game that you don't see a hammer in (Hammer Bros. count, cause they throw that shit). If you find one, good work, let me know about your thorough studies sometime. Anyway, instead of Bros. Points, we now just have a limited number of items to use in battle, which is pretty neat cause you can just equip a badge that lets you use infinite items, but that costs like 90 gubbins. One thing I miss about this game is that sadly the Thunderhand and Firebrand abilities don't return in this game, but it makes up for it with the wide variety of quirky techniques such as Baby Cakes and Bros. Ball. Not really much else to say about the game other than those significant changes, everything else from Superstar Saga remains the same, such as real time combat/dodging in battles and the return of items such as Peppers. Overall I think they did a really good job following up from the last game and really improving on things; its not perfect but damn well close.

That's my boy Nate. He almost died, but don't worry, he's killed enough bears in his lifetime that he'll survive eventually. Just check the forum for that one guy who screams BEARS

And now for the setting, as well as characters. They are very unique and dynamic; I think the main stars, the Shroobs, gained some popularity here and were featured in the future installements of the series. Personally they're not really my favourite enemy or anything but the concept of Mushroom-like aliens are pretty neat. As for the setting, I love anything time-based (ie Chrono Trigger, Mystery Dungeon, Sonic CD, etc.) I dunno what it is but I just love going back to the past or travelling to the future because you get to see how things unfold and what happens, and mostly it just depends on your actions. The thought of that is pretty dope, don't you think? Imagine just going back and erasing a really embarassing moment, or going into the future and seeing what type of life you live. I dunno, I think that's coming from a more personal side because I just actually recently played Chrono Trigger, and boy that game is a whole notha level of awesome. That's for another day though (maybe), and not to dwell too far off, but in summary the setting for PiT was pretty great. Seeing a primitive Mushroom Kingdom was pretty cool, and even though it got shitted on by the Shroobs, the fact that you can actually explore around and see past versions of people is pretty damn sweet. As for the characters, there's not much to say in that department. There were some new people like Toadbert (no not Nate) and Kylie Koopa that appeared here and there but as with all Mario RPGs, they didn't really have much outside of the game they were featured in. The return of characters such as Toadsworth and E. Gadd were nice, I really like those guys and I wish they'd appear in more games (esp the homie E. Gadd, how could you hate him?) 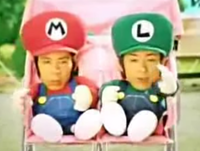 The music tho, holy shit, I gotta give props to the composer Yoko Shimomura, she really nailed it. She made favourites like Peach's Castle have some good vibes, its a really fun track, and gets stuck in your head pretty easily. And then you have shit like the final-final boss song (the second one). Wow. When I first heard this, I was pretty impressed. It sounded like the world was about to end and this was like your last stand at saving it with like a minimum chance of succeeding. The atmosphere was really intense and you could totally feel it when playing the game, looking at visuals, and hearing the music. I dunno, call me weird when I play video games, but that's the type of shit I feel when playing these things :p As for the SFX, no complaints there, everything was (holli)jolly good. Everything was on point and they had some really interesting ones thrown there, like the UFOs that the Shroobs flew. The music and SFX together are a really dope combo, it's like chicken and waffles.

Mario & Luigi: Partners in Time is really a classic by now, shit came out 10 years ago man. It nails everything pretty much on the dot, from the varied setting to the well-composed soundtrack. If you haven't played this yet, I definitely recommend you do, even if this is your first M&L game. I'd give this a 9.5/10, had amazing replay value and was always a good time playing it. I could probably pick up the game and start a new file right now, it was that fun.

Well that's two RPGs covered for ya. I actually haven't played Bowser's Inside Story or Dream Team so you might have to wait awhile for the next series of fresh reviews, straight from the oven. Keep an eye out! Until next time, or I guess when I play the next game in the series (lol), seeya around!