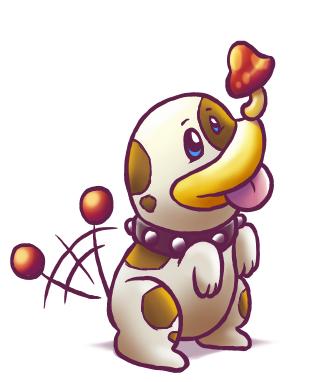 Allo allo, lovely readers, this is your wonderful Critic Corner director Crocodile Dippy (talk), here to explain to you the introduction of a never-before seen feature for The 'Shroom: a mascot! I had thought for a while that The ‘Shroom needed a better face to it than just a standard Mushroom, so after a short time of thinking, I realised that the best option would be none other than Yoshi’s adorable canine companion, Poochy! I made this decision for a multitude of reasons, first and foremost that he is our lord and saviour, the protector of all goodwill, justice, and squeaky toys in the universe, and our continued respect payed to him will ensure the newsletter’s prosperity and safety for years to come. But it was also because he has a fairly strong presence among the community here, moreso than any other relatively minor character in the Mario franchise, which made him the perfect, inoffensive choice to represent The 'Shroom. Just look at him! He’s soooo cute!

After pitching this idea to the staff in what has to be the first time I’ve ever gotten a unanimous supportive decision so quickly, Poochy became our official mascot to the fanfare of everyone but only the most heartless of animal-haters! So what this means primarily is that he’ll be seen more frequently in promotional material and art assets for The 'Shroom and the core staff. In this issue, you’ll notice him in the banners in the opening statement and closing statement, but more permanently you’ll see he’s on the recruitment poster for the sign-up page, represented on The 'Shroom Spotlight page, the picture to the side will be featured on the About page, and we’re working on adding him to the 'Shroom’s deadline notices as well! Hooray!

I shan’t keep you too long since we have a big issue for you this month, so I’ll send you off with some kind, motivational words from our new beloved mascot…