Fallout Shelter, or How I Learned to Stop Worrying and Love Lunchboxes

It's been nearly a month since E3, and everyone has watched and rewatched the trailers and conferences for upcoming games in their favorite franchises. Over the past month, I have found out that running a vault is more complicated than I originally thought. Nonetheless, I have thoroughly enjoyed playing Bethesda's new mobile game Fallout Shelter, which they released on the iOS App Store (sorry, Android users) in the hours following their conference at E3 last month.

The key to playing Fallout Shelter is balance. To keep your dwellers happy, you must have a large supply of food, power, and water. Without power, you cannot produce food nor treat water, and without an ample supply of water, you have no protection from drinking irradiated water. Each vault has an average percentage of happiness to indicate how your dwellers feel. If they're personally below 49% happiness, they'll don a sorrowful expression until their happiness is increased past 49%. In addition to measuring happiness, the game has a daily evaluator based on the overall status of your vault (see below).

My first time around didn't end so well—nearly everyone had severe radiation poisoning, and 3/4 of my vault dwellers died from a huge Radroach infestation. This happened after about a day of real time playing the game.

As your population increases (by putting a male and female together in living quarters and waiting for them to... *ahem* go to the back room), you're urged to build more rooms that give you resources. Interestingly enough, while pregnant dwellers cannot deal with disasters such as Radroaches, fires (see below), or Raider attacks, they can still work and train their skills in rooms such as the gym and bar, which is very helpful albeit ethically questionable when it comes to needing a steady supply of resources.

With the fires, and one last Radroach attack, I found myself forced to create a new vault. 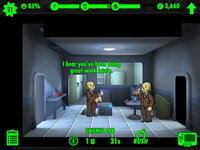 With the death of most of Vault 69 came the inception of Vault 713. This time I made sure that the amount of rooms in the vault grew proportional to the population. I even worked on getting some achievements such as linking rooms in order to get more caps and lunchboxes, which you can open to get special items for your vault. Sometimes, you can get multiples of the same item (not in the same lunchbox, of course), which leads to some exceptionally comical situations.

Thank god Megaton isn't here (Note: this is a different vault on my dad's iPad, hence the lower population).

After three or so weeks, Vault 713 hit the 100-dweller mark. Having several of the same resource gathering rooms means not having to worry about keeping your dwellers fed and hydrated so long as you have enough power near all rooms. Overall, I have thoroughly enjoyed this game of juggling resources, especially since Bethesda chose to not have paywalls or timers when it comes to building rooms--the only timer-related feature is when you want to rush a resource room.