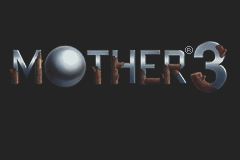 Hello, readers and welcome to our 100th Issue of the Shroom. We’ve come a long way and to celebrate, I thought that I should get off my ass for once and write something.

I’m here to talk about my experience with Mother 3, the final game in the Mother trilogy, the brainchild of Shigesato Itoi. So, before I begin my thoughts, I’m going to briefly explain the gameplay and describe the characters so you get an idea of what I’m discussing. I’m going to keep this as spoiler-free as possible, which means I’m not going to delve into the story.

To go directly to my spiel…just scroll down past the first two headers… Click here to leave this page and never read this. :(

The best character in the game.

The game largely follows the same format as its predecessor, EarthBound. You will have 4 party members by the end of the game, each with their own special abilities. You will battle enemies that appear on the overworld map; and you can either sneak up on them or you may get ambushed by them. Returning from EarthBound is the scrolling HP meter, which allows you to prevent your party members from instantly dying if you heal them, win the battle, or run away before their HP reaches zero. Specific items can only be equipped to specific characters and some enemies drop items, including some of the party members’ best equipment.

The biggest change between EarthBound and Mother 3 is the battle system. Instead of just bashing an enemy once, you can string up to 16 hits on an enemy if you hit them to the beat of the battle music. Unlike EarthBound, there is now a run button that allows you to…well, run. If you are a high enough level, you can instantly KO enemies on the overworld by running into them, as walking into them will still trigger a battle even if you can OHKO. Unfortunately, you will NOT gain experience for defeating an enemy in the overworld, unlike EarthBound.

Each character has their own set of specials that aid them and others during battle.

There are a total of 6 characters the player will take control of throughout the game, with the first four mentioned becoming your permanent party by the end.

Lucas is the main character of the game. He is the son of Flint and Hinawa, and twin brother of Claus. Lucas first appears in the prologue where he is shown to be timid and a bit of a crybaby. He becomes playable in Chapter 4 and is shown to have grown stronger since then. Lucas’s equip-able weapons are mainly “Sticks”. Lucas can also use PSI in battle, but barring PK Love and arguably PK Flash, he mainly utilizes support and defensive PSI to help his other party members.

Duster is a thief in training and the son of Wess. He is described as being bum-like with bad breath and a limp. Duster first appears in Chapter 1 where he aids Flint in climbing the cliff to inspect the red cloth. Duster later appears as the main character of Chapter 2 where he must infiltrate Osohe Castle to find a very important object. He becomes a permanent party member at the end of Chapter 4. His weapon are “Shoes”. In battle, Duster utilizes various Thief Tools. His Wall Staples can pin an enemy down, making them unable to move for a few turns. His Siren Beetle can make normal enemies turn away, exposing their backs. The Hypno-Pendulum puts enemies to sleep and his Smoke Ball makes enemies cry, making their attacks miss more often. The Scary Mask and Tickle Stick lower attack and defense, respectively. Sometimes when a battle begins, Duster can strike a foe immediately. If an enemy attacks from behind, Duster can either flip around the enemy or release a reverse kick for damage.

Kumatora is the princess of the Osohe Castle and was raised by the Magypsies. Like Lucas, she is able to utilize PSI abilities in battle. She is described as being a tomboy, but is very kind. She becomes playable in Chapter 2. Kumatora’s equip-able weapon is “Gloves”. Unlike Lucas, Kumatora mainly uses offensive PSI, such as PK Fire, PK Freeze, PK Thunder, and PK Ground.

Boney is a brown dog that belongs to Lucas’s family. He is first playable in Chapter 1 after the forest fire is extinguished and later becomes a permanent party member in Chapter 4. Boney only gains one weapon, the Canine Weapon, so he relies on “Collars” as his primary form of offense increase. In battle, Boney can sniff an enemy, allowing the player to know the elemental PSI and status effects they are susceptible to.

Flint is the father of Lucas and Claus and husband to Hinawa. Flint wears typical cowboy attire and is shown to be a loving father and husband, although he can be bit rash in his decisions. He is only playable for Chapter 1 and his main equip-able weapons are “Sticks”. In battle, Flint’s Brute Force allows him to use several physical abilities in battle. His Swing allows him to hit multiple enemies for moderate damage. Power Smash allows Flint to hit an enemy for a huge amount of damage, but it rarely hits. Strengthen Up and Toughen Up allows Flint to raise his attack and defense, respectively.

Salsa is a monkey that is under the control of Fassad and he must obey Fassad’s commands to ensure his girlfriend’s safety. He is the main playable character of Chapter 3 and is encountered as a temporary party member in Chapter 7. Salsa does not have any equip-able weapons and has low offense because of that. In battle, Salsa can use Monkey Tricks on the enemy. Apologize solidifies an enemy while Make Laugh can cause an enemy to waste turns by doing nothing but cheering. Dance has random effects, including lowering enemy attack, defense, and speed, raising Salsa or a party member’s attack, defense, or speed, or flipping an enemy around. Monkey Mimic allows Salsa to mimic the move he was last hit with on that turn.

My Thoughts and Other Random Babbling

Please end my pain and suffering. –Me, every time I fight this boss

“Strange, funny, and heartrending”. There could not have been a more apt slogan to describe this game. Compared to EarthBound Beginnings and EarthBound, Mother 3 puts a lot more emphasis on its story. You’ll follow these characters, through the good times and the bad times, as they try to figure out how their once peaceful world is slowly being torn apart and being invaded by strange creatures. While the story definitely has a sense of melancholy and despair, it never loses its sense of whimsy and fun that the previous entries in the series had. They story will continuously shift tones, but not in such a drastic way until the very end.

Each non-generic NPC, including the playable character, changes as the story progresses and they all have their own sets of problems that they go through. Even then, there are certain NPCs that you continuously encounter throughout the game and notice how they react to the changing environments. I think one of the most important non-playable characters is Fassad. Without giving away too much, he is one of the antagonists of the game, and as you progress through the game, you can who he really used to be.

I feel the game does have quite a few moral lessons, but the two I feel are the most apparent are greed and the consequences on the reliance on technology.

The vast majority of the first half of the game takes place in Tazmily Village and its immediate surroundings. The people of the village are caring and compassionate. They do not believe in being “paid” for their good deeds, be it providing free items for the player or a free hotel where they can heal. However, once money is introduced into the town, all positive values are thrown out in order for people to make a quick buck. The hotel and store now cost money for use, and the kindness of a lot of the townsfolk has all but faded.

The reliance on technology is also a big factor. Throughout the game, enemies modified with robotic parts will begin to be re-introduced. This is part of an experiment to make animals “cooler and stronger”, even if it means turning them into vicious killing machines. Tazmily Village transforms into a bustling town complete with a train running through it, paved roads, and even an old person’s home. The people of the town are also too enamored by their “Happy Boxes”, which are actually television sets, that many no longer communicate with each other.

As your journey unfolds, you soon discover the sick and twisted experiments being conducted by the enemy, be it by splicing animal parts to creature new creatures and unleashing them into the wild or instilling fear into people by destroying their homes with artificial lightning. The once peaceful village of Tazmily becomes a ghost town near the end of the game, and it isn’t until Lucas and his party go into the city that they find out the true mastermind behind the crimes.

The new logo at the end.

The ending is left ambiguous and, while many people see it as a bit controversial as it is left as a bit of the cliffhanger, I think it works well for this game in the context that said ending occurs in.

With all that said and done, if you asked me about the possibility of Nintendo releasing Mother 3 outside of Japan 3 years ago, I would’ve laughed. However, with EarthBound being released in Summer 2013 and Mother 1, now called EarthBound Beginnings, released a little over a month ago on Wii U, I think there is no doubt that Mother 3 will come overseas. Now whether or not if it’s in the immediate future is unknown, but one thing is for certain: I will buy it whenever it comes out and you should too.

Thank you for everything, Mr. Iwata. Without your help, we would have never gotten EarthBound or Mother 3. May you rest in peace.