Anyone who has heard of Pokémon has likely heard the controversy over its inclusion of evolution, although anyone who wasn't banned from playing the game as a child is most likely aware that proper evolution simply does not work that way. The part with the flashy light show transformation is obviously just done because it's cool and they called it evolution because it sounds cool and scince-fictiony; however there are examples of proper evolution to be found in these games, even if you have to speculate a wee bit. Just don't ask me to explain the ghosts, that's a lost cause.

First, let’s explain what evolution actually is. Evolution is a process in which species change, adapt, and mutate over time, eventually becoming a different species altogether; genetic variation produces minor, random changes within the species, after which natural selection then chooses the ones best suited to their respective environments by process of elimination. As these slightly different members of the species continue to breed with one another, they follow a different path of development from those without their traits, slowly but surely becoming so different that they can no longer breed with the other members of their initial species, and thusly become their own. Through this method, all the diversity and complexity of life was able to rise from single-celled protozoa, a common ancestor we all share. Probably the best example would be Darwin's finches; some of the islands in the Galapagos isles had more seeds and nuts, while others had more prey like insects. The finches that lived around the nuts developed larger beaks designed to break them open, while the finches surrounded by insects developed longer, sharper beaks for pecking at them. Over time, their breeding built on these traits until they became completely different species from each other.

So how does this apply to Pokémon? Well, first I'd like to point out that we will run on the assumption that what the Pokémon World calls "evolution" is in fact the development of the individual species through its various life cycle (eg. Juvenile to adult). Now, while we're on the topic of birds, we'll start with Pidgey. Pidgey live in forests and open, grassy plains, and subsist primarily on the insects that dwell there. One of its Pokédex entries states:

"It usually hides in tall grass. Because it dislikes fighting, it protects itself by kicking up sand."

You can see from its appearance that it has flat, wide-set talons for walking on the ground, and perhaps for digging up worms and insects as well, and its strong wings allow it kick up dirt as a defense mechanism. Its plumage is brown to better camouflage it among the dirt, and it has superior vision (as indicated by its Ability Keen Eye and some of its Pokédex entries) for spotting prey and predators alike. While its beak doesn't seem particularly developed, the entries for its "evolved" (adult) form, Pidgeotto, put a considerable emphasis on its well-developed talons:

"The claws on its feet are well developed. It can carry prey such as an Exeggcute to its nest over 60 miles away."

"It has outstanding vision. However high it flies, it is able to distinguish the movements of its prey."

As for Taillow, these two entries will explain everything if you consider the climate and environment of Hoenn:

"It dislikes cold seasons. They migrate to other lands in search of warmth, flying over 180 miles a day."

"Taillow courageously stands its ground against foes, however strong they may be. This gutsy Pokémon will remain defiant even after a loss. On the other hand, it cries loudly if it becomes hungry."

Hoenn is a tropical island region with large expanses of water between islands, and the local environment we normally find Taillow inhabiting has a lot of potential prey, with Pokémon such as Wurmple, and few predators with Pokémon like Poochyena, which would likely be more interested in prey that is easier to catch like Zigzagoon or Seedot. Taillow's wings are very large compared to its body, in order get maximum lift and glide distance for the long distances it must cross without rest. The lack of predators explains its boldness (for a juvenile) and bright plumage it has also developed in accordance with its prey:

"Wurmple is targeted by Swellow as prey. This Pokémon will try to resist by pointing the spikes on its rear at the attacking predator. It will weaken the foe by leaking poison from the spikes."

Wurmple protects itself with poison spikes, which Taillow has compensated for with its ability Guts, which raises its attack power when poisoned.

Starly and Pidove have evolved around man-made sub-urban and urban environments, respectively. Their plumage is grey to hide themselves in the urban environment, and their cry is loud so they can be heard above the noise. However, Starly are more wild:

"Because they are weak individually, they form groups. However, they bicker if the group grows too big."

"They flock around mountains and fields, chasing after bug Pokémon. Their singing is noisy and annoying."

They congregate in the forests and fields just outside of human habitation in large flocks. They are extremely territorial, possibly due to human encroachment, and may explain why they leave the flock when they become strong enough to become independent and eclipse their competition when they reach full maturity. Pidove live in very close proximity to humans, which is emphasized in its Pokédex entries:

"These Pokémon live in cities. They are accustomed to people. Flocks often gather in parks and plazas."

"This very forgetful Pokémon will wait for a new order from its Trainer even though it already has one."

How could being stupid possibly be an advantage? Look in a mirror. Pidove has a heart shape on its chest which makes it appear cute, and its stupidity makes it seem helpless. We humans love things that are cute and helpless, making us more likely to feed it and protect it, thus encouraging this path of evolution.

This is just the birds, though. You can see many examples of evolution throughout the Pokémon World, right down to the original ancestor that started it all.

"Mew is said to possess the genetic composition of all Pokémon. It is capable of making itself invisible at will, so it entirely avoids notice even if it approaches people."

Just like the many breeds of dogs in real life, humans control can control species breeding in Pokémon, mixing and matching the traits we like into their offspring, often with consequences...

"Because its fangs are too heavy, it always keeps its head tilted down. However, its bite is powerful.

Growlithe was also likely a product of controlled breeding, but that's just speculation based on its appearance as there's no Pokédex entries that imply that. Even if it wasn't bred this way, it has developed a strong, mutually beneficial relationship with humans. This is in contrast with wild dogs that have resisted or escaped human influence such as Houndour, which have remained feral and territorial, operating in highly coordinated packs that even humans fear. (barring a few exceptions because... y'know... gotta catch 'em all)

"Houndour hunt as a coordinated pack. They communicate with each other using a variety of cries to corner their prey. This Pokémon's remarkable teamwork is unparalleled."

"Long ago, people imagined its eerie howls to be the call of the grim reaper."

Most species don't survive natural selection however; many go extinct, most often dying in mass extinctions millions of years ago. I can't say how they evolved to their environment, since Pokémon doesn't provide any information about it. Nonetheless, this is in memorial of the fallen...

"Omastar uses its tentacles to capture its prey. It is believed to have become extinct because its shell grew too large and heavy, causing its movements to become too slow and ponderous."

"Armaldo is a Pokémon species that became extinct in prehistoric times. This Pokémon is said to have walked on its hind legs, which would have been more convenient for life on land."

Of course, there were survivors that would eventually repopulate and diversify into modern life. You can see the influence of the survivors today...

"Kabuto is a Pokémon that has been regenerated from a fossil. However, in extremely rare cases, living examples have been discovered. The Pokémon has not changed at all for 300 million years."

"Kabutops swam underwater to hunt for its prey in ancient times. The Pokémon was apparently evolving from being a water-dweller to living on land as evident from the beginnings of change in its gills and legs."

Much of this (well, all of it) is conjecture, but nonetheless I've made my point. Even a silly, outlandish game like Pokémon can show how all life developed through the evolutionary process, and you should be able to draw your own conclusions at this point. Pokémon like Grimer and Trubbish likely would have evolved in accordance with their toxic habitats. Klink, Parasect, and the Plusle/Minun duo, have all developed a mutual symbiosis with their own and/or another species to aid and sustain each other, while Magnemite most likely developed to make use of the electrical power of the power plants it inhabits. How, then, do I explain Magnemite's existence in ancient records before electricity was discovered? 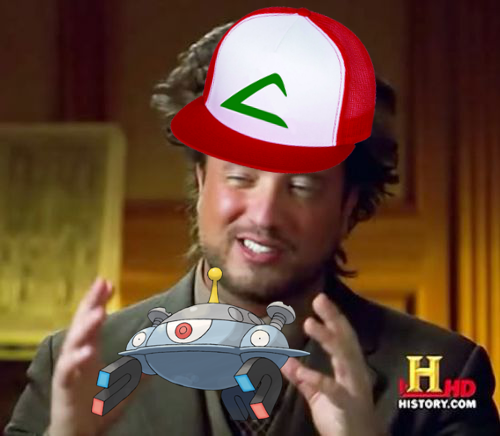