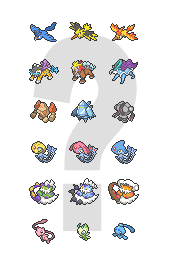 Origin Pulse, Precipice Blades, and Dragon Ascent: the latest in a long line of signature moves[1] belonging to legendary Pokémon[2]. These are arguably some of the coolest moves that fall into this category, and yet, they were only just introduced as 2014 drew to a close. Interesting...but a weird interesting. By my count, there are currently 18 legendary Pokémon (counting Phione) which still do not have even one signature move, which kinda irks me a little bit. Pokémon Omega Ruby and Alpha Sapphire may have saved three former misfits for now, but what about the rest...?

It's not as if there's a deficiency of signature moves for legendaries (and yet, there are somehow still 18 legendaries without them); Victini has two (V-create and Searing Shot), Keldeo has two (Secret Sword and Sacred Sword), Hoopa has two (Hyperspace Hole and Hyperspace Fury), Zygarde has three (Land's Wrath, Thousand Arrows, and Thousand Waves), and Reshiram, Zekrom, and Kyurem have a total of seven among them (Fusion Flare, Blue Flare, Fusion Bolt, Bolt Strike, Glaciate, Ice Burn, and Freeze Shock), while every other legendary has just one. Given this imbalance and the aforementioned inconsistencies, you kinda have to ask yourself just what the deal is. So why exactly is it that signature moves do not exist for every legendary Pokémon?

Were the members of each of these leftover legendary trios seen as being too similar to justify having individual signature moves? (The members of the Swords of Justice all share a single signature move (Sacred Sword), so if this is the case, couldn't something like this be done for at least some of the trios? Maybe a Techno Blast-esque type changing move called...I don't know..."Elemental Storm" or something for Articuno, Zapdos, and Moltres? I mean, they have signature moves as Shadow Pokémon for crying out loud (Shadow Chill, Shadow Bolt, and Shadow Fire), why can't they have them otherwise?) Is there a bias against the seemingly more minor legendary trios in general?

Whatever the reason, I can't help but feel as though there's significant room for improvement here. Not having the unique powers of a legendary Pokémon represented and usable in the form of a signature move is annoying in and of itself, but if you're someone like me who battles with only legendary Pokémon (yeah, I know), it's downright frustrating (about as frustrating as there not being more legendary Pokémon available with their hidden abilities, but that's a rant for another day). Sure, you could attribute existing moves to legendary Pokémon and call them their signature moves (like Aurora Beam for Suicune or Hurricane for Tornadus, for instance...I'd also be perfectly fine with cutting Ditto out of the loop completely and looking at Transform as Mew's signature move) or invent your own moves out of thin air that sound like they could actually legitimately exist (like "Scorching Fire" for Moltres, taking inspiration from Shadow Fire), but why should either be necessary?

Being as stubborn as I am, I probably won't be satisfied until each and every legendary Pokémon has at least one signature move of its own. I could see a request to give every single Pokémon a signature move being infeasible, but considering the number of legendary Pokémon is so small relative to the number of total Pokémon, it shouldn't really be a huge deal to fill in the gaps for the less than 10% that they collectively account for. Speaking for myself, the addition of signature moves for Kyogre, Groudon, and Rayquaza after all this time was not only a needed breath of fresh air, but a heretofore missing puzzle piece, and I don't like unfinished puzzles; they were definitely worth waiting for, but I also don't like waiting. Maybe we'll finally see the appearance of some more missing signature moves when we get our hands on "Pokémon Dazzling Diamond and Glittering Pearl". I guess only time will tell.