The 'Shroom:Issue 100/Gettin' Jiggy With It

Gettin' Jiggy With It: A Banjo-Kazooie Retrospect

Move aside Super Mario Bros., because your 30th birthday happens to also fall alongside Rare Ltd.'s. This is Paper Jorge here, and I'd like to dedicate the following chunk of text to celebrating Rare's finest gift to video gaming (in my debatable opinion). And that's none other than the Banjo-Kazooie series. Let me give a little tour of the series for those of you unfamiliar with it, and hey, if you're familiar with it, go ahead and give this a read regardless, we're both going to be embarking on a brief nostalgia trip.

The Banjo-Kazooie series really began with Banjo being a playable character in Diddy Kong Racing. He was presented as a lovable brown bear, with yellow shorts and a blue backpack. But nothing could've prepared us for what came next. Banjo-Kazooie emerged in 1998 for the Nintendo 64, in the golden era of platformers, and boy, was it glorious. The plot revolved around Banjo and Kazooie as a duo; Kazooie was the bright red bird, that resided in Banjo's backpack. 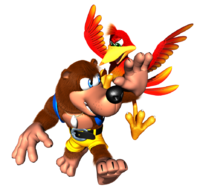 The best duo that's not Batman and Robin.

The gorgeous Gruntilda; her character's a slight nod to the Wicked Witch of the West.

In the game, Banjo's sister, Tooty, gets kidnapped by the evil witch named Gruntilda. Her grand master plan was to steal Tooty's beauty through a machine that her right hand man, Klungo, had built. So, in this game, you play as Banjo and Kazooie, and set out to rescue Tooty, and defeat Gruntilda. Two other main characters play a huge role in this adventure; Bottles the Mole, who teaches the duo new moves and abilities, and Mumbo Jumbo, who can transform the duo into creatures like a crocodile or a seal. This game was what is now dubbed a “collect-a-thon”; basically, the entire gameplay just revolves around finding and collecting random items. This game's answer to Super Mario 64's Stars are the Jiggies. Jiggies are essential to advancing world to world. 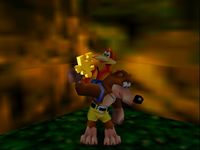 The difference between Super Mario 64 and Banjo-Kazooie is that Mario didn't eat the stars after collecting them.

And when I say collect-a-thon, I'm not kidding.

There was no way to not fall in love with this game; it was just so colorful, had so many vibrant characters, and the worlds were massive and expansive and so fun to explore. Not to mention, its script was littered with humor that children would find as funny as adults would. Unsurprisingly, it was met with tremendous success, the game was a high point of the platforming genre, a genre that has seemingly gone extinct within recent years. In the game's ending, Banjo and Kazooie rescue Tooty and defeat Gruntilda, by having her fall off the highest point of her lair into the ground, where she manages to get buried deep underground, directly under a very large boulder. The final scene shows Klungo attempting to push the rock off her, while Gruntilda swears her revenge, promising to be back for Banjo-Tooie, Rare's way of saying, yes, there will be a sequel.

You can tell Klungo's going to have some trouble with this one.

How could Rare top what they made? This game was already as perfect as games can get, right? With Banjo-Tooie being released two years later, in 2000, just as Gruntilda promised! Don't be thrown off by that title, Tooie isn't a new character, but rather just Rare attempting to combine the words Two and Kazooie. Odd naming choices aside, Banjo-Tooie managed to multiply everything Banjo-Kazooie had done tenfold. The worlds were twice as big and the game boasted twice as many characters, items, collectibles and moves. Needless to say, this also made the game harder and it took longer to complete. Though not entirely everyone will agree that Tooie was the better game, I am completely under that notion.

If anything, the game being too big could be a legitimate complaint from someone out there.

She just manages to look prettier and prettier, huh.

In the sequel, things got much darker. Gruntilda's sisters managed to lift up the boulder off Gruntilda using magic, and it is revealed to the player that all of Gruntilda's skin has rotted away. Gruntilda proceeded to attack Banjo's house while the gang was playing a card game. Banjo, Kazooie and Mumbo make it out unscratched, but Bottles is killed in the attack. Gruntilda and her two sisters leave and begin setting forth Gruntilda's new plan: to suck the life out of the entire island to restore her body. Her plan starts with King Jingaling, who is reduced to being a zombie. So once again, Banjo and Kazooie set out to stop Gruntilda, this time with an even larger cast. This time, Mumbo is a playable hero who occasionally assists in some worlds. His job of transforming the duo of passed on to Humba Wumba, while Bottles' job is passed on to his brother, Jamjars (since, you know, he's a ghost now...and a corpse.)

Still not as creepy as Zelda's Redeads, but nothing can top that.

Excuse the graphics, it was a different era.

Upon beating the game and defeating Gruntilda again, the player was met with a little tease, a little hint of what's to come. Gruntilda mentions that she will get her third revenge in Banjo-Threeie. Fans were excited. Fans were hyped. If Banjo-Tooie was twice as good as Kazooie, how good could Threeie be? And yeah, in case you were wondering, Bottles and King Jingaling return to life in the end.

I know, Rare, I know break-ups are tough.

Now, my job here is to celebrate the Banjo-Kazooie series, so I'm going to hold off on my negative comments. But to give a little background to those uninformed, what happened next was, in 2002, Rare got sold from Nintendo to Microsoft. Nintendo lost the rights to everything Rare had done such as Banjo, Conker, Perfect Dark, etc., save for Donkey Kong. Nintendo got to hoard all Donkey Kong Country and Donkey Kong 64 related material. From that point on, a true successor to Banjo-Tooie was never made, and since we've been treated to only spin-offs, ports, cameos... and a vehicle-based title. We'll get to that.

Hey, is everything alright, bud? You look a lil different.

I'm letting the pictures speak for themselves, at this point.

Banjo-Kazooie: Grunty's Revenge, a Gameboy Advance title, arrived in 2003. It was our lovable, iconic series converted into the handheld. It played similarly to the previous games, but from a top down perspective. The plot was supposed to take place between Kazooie and Tooie, and revolved around Gruntilda receiving a robot body, and traveling back in time to prevent Banjo and Kazooie from ever meeting. It has been since dismissed by Rare and fans as being non-canon, and that's probably for the best.

In 2005, Rare and Nintendo were ending all remaining ties, with one of them being replacing all characters in the upcoming Diddy Kong Pilot with Banjo-Kazooie characters. The end result was a Banjo-Pilot, a plane-based racing spin-off, and it was an interesting take on the series. It included neat little references to all three previous titles. For a handheld racing game, it was fairly good. In 2006, a preview trailer was released for what would be the next Banjo-Kazooie for the Xbox 360. Now, although I wasn't too happy with the redesign (I'm still not), the trailer hinted at a return of Spiral Mountain and Jiggies and you know, old-school collecting. Fans were on the edge of their seat. It was a crazy time when the trailer dropped.

I can't believe this game's on its seventh year.

Then it came out in 2008... Banjo-Kazooie: Nuts & Bolts. The plot revolved around, well, yeah, Gruntilda comes back. And then right before Banjo-Kazooie and Gruntilda fight, a tall figure with a TV screen for a head called the Lord of Games appears and tells them they're going to have to settle their differences over a series of modern games and challenges, instead of the old-school way. So, he gives Gruntilda a new body, and tells them to start battling...in cars. The whole game is cars. You build cars, customize cars, explore worlds in cars, I mean, you hardly ever spend any time outside of a vehicle. All familiar characters from the first two games are all there but they've also been redesigned. There's a lot of new characters too.

Honestly, this was pretty neat.

And I mean, technically? It wasn't a bad game. Honestly, it was fun, it was really enjoyable, and reviews from blogs and whatnot were generally positive. But it paled in comparison so, so, so badly. It did not feel even remotely close to a Banjo game, not even in its art style or graphics or script, it wasn't memorable, and the reviews from the fans were awful. Since then, the series has stayed quiet, with not a peep, except for two ports on the Xbox Live Arcade, and Banjo and Kazooie being playable in the 360 version of Sonic All-Stars Racing. Also, a Banjo skin was 360 Minecraft DLC. And this E3, we received an announcement of Rare Replay, an Xbox One compilation of 30 Rare games, including Banjo-Kazooie, Banjo-Tooie and Banjo-Kazooie: Nuts & Bolts. Fans are understandably upset that Banjo-Tooie never received the proper sequel that was promised 15 years ago... There is hope, however, hope that has been in the works for a while. In 2012, a group of former Rare employees that worked on the original two titles joined to make a spiritual sequel to Banjo-Kazooie. The game was funded by fans over Kickstarter in early 2015, and since then what's been shown so far, is beautiful.

Already in love with these two critters.

Presenting Yooka-Laylee, a chameleon and bat duo. This game's music is composed by Grant Kirkhope, who also did the music for the original two titles (and yes, even Nuts & Bolts), and will be released for the Xbox One, Playstation 4, Wii U and even PC, with a release date currently scheduled for October 2016. I'm excited for what's to come and I hope everyone is too, not just fans of Banjo-Kazooie, because the team is hard at work at creating a rebirth of the forgotten explore and collect platforming genre that even recent Mario games have strayed away from. You can visit the team making Yooka-Laylee at their new studio website, Playtonic Games, and check out the Kickstarter that made this all possible. And of course, this is supposed to be a celebration of Rare, peep at Rare's official website, and watch out for their newest title coming soon, Sea of Thieves, a pirate-based MMO-type game.