First off, there are no rainbows in the Rainbow Dream, at least none that are of any importance. There is no sky on Rainbow Road, the course is set in space. And the name means nothing, it's just a name. Phoenix Rider

Not of any importance?! how do you get from area to area? Rainbows. What do you slide off of to get coins? Rainbows. Also, one is day, the other is night. they are still in the sky! Max2 (talk) I feel like a 2-yr. old, arguing over rainbows.

I'll concede the rainbows, but Rainbow Road is not set in the sky at night. It is set in space in all games except Double Dash. There is still no significant similarity. Phoenix Rider

Rainbow Coaster, Rainbow Downhill and Rainbow Road are all different courses. Therefore, they should have individual articles.

Rainbow Road (song) seems to hint that you go to Rainbow Road when you die. Should this information be mentioned?

It is a road that you go

And you will know when you get there

It is a road that you go

It's a road that you go when you die

It's a road we're all gonna go

It's got Princess Peach, Mario, and the Toad

It's a road we're all gonna go

It's where you go

I miss you again uncle

It's where you go

This sounds more like fan material, I don't think we should put this on the wiki.

I'm not sure why they put Rainbow Road in F-Zero X. I must have been because they wanted more Mario Kart fans to get into F-Zero games. And of course a lot of codes let people to make courses from OTHER Mario Kart games. Look it up on Youtube.

Will there be a Rainbow Road in Mario Kart 7?

That belongs on the forums. Mario & Luigi

That'd be it. At exactly what point from the beginning of the MKWii Rainbow Road's music does it contain the music from the SMGalaxy 1 Good Egg Galaxy BGM? I just cannot notice it. What specifications I'm looking for is "subject time-subject time," like "0:20-0:25." I just need to know.XaikuTheMaverickHunter 20:18, 11 November 2011 (EST)

Could Rainbow Road possibly be based on Rainbow Bridge in Japan?

I was playing Mario Kart: Double Dash!! the other day, and I noticed that there are clouds in the reflection of the rainbow! The sun also can be seen in the reflection, but I found it very interesting that there were both daytime clouds and the sun reflected when it is night-time. Should we add this somehow to the article??

See?? (Look at the reflection in the road on both!) 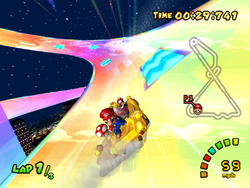 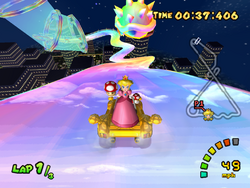 Is this needed anymore, the article looks complete and I think that without the template on it, it could be nominated to be a featured article Yoshi876 (talk)

I honestly cannot hear the SMK Rainbow Road music in Bowser's Galaxy Reactor. Can someone please show me a link to a comparison [video]? If not, it will have to be removed because it is only subjective and not a concrete fact. MarioComix (talk) 17:54, 16 August 2013 (EDT)