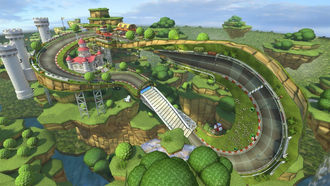 “It’s a race to the finish line! Start your engines!”
—Mario, Fortune Street

Mario Circuit is the name given to various race courses in the Mario Kart series. These courses generally contain features associated with Mario, such as his red cap, Mushrooms, Peach's Castle, Warp Pipes, Goombas, Chain Chomps, and Piranha Plants. Various banners bearing his name can also be seen along some of these tracks. Mario Circuit is usually featured in the Flower Cup. Outside Mario Kart, Mario Circuit also has iterations in other games such as Itadaki Street DS and the Super Smash Bros. series.

Mario Circuit is a recurring name first given to four tracks in Super Mario Kart. In the original Japanese versions, it goes on to be used for one track in every mainline game. It is one of four track names that are reused in more than two courses and consistently appear in many Mario Kart games, alongside Luigi Circuit, Bowser's Castle, and Rainbow Road.

In Mario Kart 64, all circuit courses are known as raceways. Thus, instead of using Mario Circuit, Mario Kart 64 uses Mario Raceway instead.

Mario Circuit is a playable game board in Itadaki Street DS and Fortune Street. The design of the board is based on Mario Kart: Double Dash!!, Mario Kart DS, and Mario Kart Wii, though the route of the track is identical to its appearance in both games.

A Mario Circuit stage similar to the layout of the Figure-8 Circuit appears in Super Smash Bros. Brawl. The stage has two platforms resembling a jump platform and a road pavement in the center. Shy Guy racers will appear and damage players from both the jump and the central road. However, they themselves can be damaged causing them to spin out and be harmless. The stage is later renamed to "Figure-8 Circuit" in Super Smash Bros. Ultimate to better differentiate it from the other Mario Circuit stage, instead of being labeled as Mario Circuit (Brawl).

Mario Circuit appears in Super Smash Bros. for Wii U, this time based on the course featured in Mario Kart 8. The stage is a moving stage in which a platform carries the fighters around the track and stopping at various points. Shy Guys are also racing on the track and can damage the fighters if they are hit by them, similar to the Mario Circuit in the previous game.

The Mario Circuit from Super Smash Bros. Brawl also returns in this game.

Mario Circuit appears in Mario & Sonic at the Olympic Winter Games which is heavily based on the version in Mario Kart Wii and is used for the individual and team versions Dream Ski Cross with the road now being covered entirely with snow and more ramps being carved out of the snow on the track itself. While the general layout of the first half of the course is identical to it is in the aforementioned game albeit with a much steeper descent, the second half of the track is entirely different, where they are linked by two Warp Pipes which split the track into two, the path on the left has a more wavy shape while the path on the right is filled with Coins but a Goomba and Piranha Plant serve as obstacles. Once the paths join back up together there a few tight downhill turns and Piranha Plants until the racers reach a DK Cannon taking them back to the starting line for a second lap.

The level Mount Must Dash in Super Mario 3D World is based on the Mario Circuit courses from Super Mario Kart. The level also uses an arrangement of the courses' music from that game.