That wasn't an Axe in SMB. It was a switch that looks similiar to an axe.Knife (talk)

Really? Then why is there an axe is Mario Hoops 3-on-3? Seriously, it wasn't a switch. Paper Jorge

This has something to do with SMB how?Knife (talk) 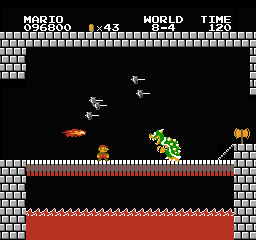 The only reason it doesn't fall in Super Mario Bros. is because the lazy programmers at Nintendo "didn't have time" to make different frames for it. It's supposed to cut the little slope near the bridge, which is the support.
The preceding unsigned comment was added by Pseudo-dino (talk).

Shouldn't this page be "axe"? I know the difference between American and British English, but many Americans distinguish the weapon from the tool by labeling the weapon as "axe" and the tool as "ax". PoisonMushroom 17:48, 21 July 2011 (EDT)

As somebody said above, it is called "Ax" in Player's Guides and things like that. Yoshiwaker

And besides, Axe is the name of either an eletric bass or a deodorant. One of those. Magikrazy51 (talk)

Execute part of this article[edit]

remove only the Super Mario Odyssey section of the article 5-1-11-3
As per MarioWiki:Generic subjects, Generic subjects are worthy of their own article if they meet any of the following criteria:

Most of the uses of the axe would be worthy of inclusion in this article, as most axes are used in gameplay, and they have a function which is different from the real world counterpart, as I have yet to see a real-world axe being used to cut a bridge above lava. However, there is two sections of this article, being the Super Mario Odyssey and the Mario Hoops 3-on-3’’ sections. In my opinion these sections wold qualify for removal, for the reasons stated below:

Basically, these two sections of the article in my opinion qualify as generic subject that should not be covered and thus should be removed. So should this article be cut?

Only remove the ‘’Super Mario Odyssey’’ section of this article[edit]

Keep the article as is[edit]

Yeah, that was a mistake, though I still do not feel it is necessary to keep on the article. --

Also, wouldn't the information from Ultimate be more relevant in the trivia section? --