Yeah yeah, rules and such.

How do I make the thing that has your picture??? D:

Yeah, you were "forced" to join my pipeproject.

Edit: I know you were joking.

Alex, head of his own syndicate

Yes. I didn't check. I knew about you getting to 100 headers because you archived it recently.

Yeah, i keep forgetting FF65 is feminine! BTW, do you watch The Suite Life on Deck? It's over, but I'm watching it right now!

You really think i should?

I just joined as DKPetey99.

Go on the forums.

Oh you did great, but you missed one boss, Kerozene. He only appears in the GBA version.

On the forums you said on the Yoshi's Island 3DS, that the Koopalings will be boring, but I changed it.

I am still Waiting for an Answer on Talk:pokemon to what I said.[edit]

Thank you for that Goomba's Shoe15 (talk)

SFM is back, and he has not made a single main space edit yet!

I know that. But if we blocked him twice would he bother us again?

It's sarcasm cause they are really douches Goomba's Shoe15 (talk)

Yoshiwaker is away until Friday evening, so he won't be replying to any messages. Dr Javelin

Hey Yoshiwalker! Would you like to be in my story Supremo's Adventure?.

I don't get that edit Mario jc made.--

Well, you could always have different styles of sprites. (Like SMW2 style.)--UM3000

Ok. I finished the sprites: 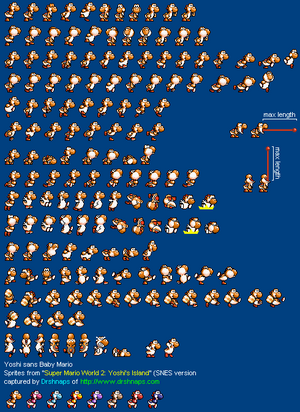 How is it not allowed? Niiue - Who has lost his tail?

How is it unnecessary? Niiue - Who has lost his tail?

Sorry to interrupt But didn't Plumber690 accuse u of being a sockpuppet of New Super Yoshi?

He is a bit crazy.

I busted Tanooki151, Octoomba500, and Super Curious Bros all three of them were sockpuppets and i reported them to the admins. And he gave me a warning for being a sockpuppet of Kaptain K Rool despite the fact that ive had an account 2 years longer than KKR Goomba's Shoe15 (talk)

Yeah he is pretty obvious he's just a troll who wont leave and will be back. Goomba's Shoe15 (talk)

How did you know it was ME that did the Mario Harbor job thing? This is just getting scary...

OnBJAODN/Games. Remember? U deleted Mario Harbor job. And somewhere along the lines, U mentioned me.

Because sometimes you guys do it!! User:DK Fan

BTW can you put your sprites on your userpage?--UM3000

Look at Star Pipe!!! IT IS A STUB, AS WELL!!!
The preceding unsigned comment was added by KoopaMan (talk).

I think that CleanupGuy's DK King of Swing logo and Kritter image is better, actually (because they're brighter and cropped, respectively), but if he changes the Donkey Kong DK barrel blast image, it should be reverted (obviously because his one is a major decrease in size, and the older one is way bigger and has better quality).

Yeah, but only by a bit, so that's alright (unlike his the DK one). There was some empty white space in the Kritter one.

Its from Mario Super Sluggers.

P.s. What are your battle stats?

You know, like Paper Mario stats. Like HP, Sp, the stats I made for you in my RPG!

Because they're either smaller or have darker colors. :/.--UM3000

F117's Message Block: Would you like to use a 1-Up Mushroom to revive Fawful117?

I don't know how to race on Mario Kart Wii Wifi. When I do, I would like to race you! It would be fun!!! Would you like to? Pixl Power

I just got Wifi on my Wii, can we race? Pixl Power PS: Can you sign yourself as Yoshiwaker so I know who you are?

hey man want to be friends?

Oh, I must have forgotten. You mean it doesn't allow you to go on Mibbit? Why not use UP's Java applet?--UM3000

Hi, can we be friends? I love Yoshi too! Also, your birthday is right before mine. Red Snifit

Hey, can I be your friend, too? I LOVE Yoshis too!!! They are so cute. I am Red Snfit's brother. Pixl Power

Looks like i'm going to have to leave this wiki.The sig explains why...

The Pipe Plaza has come to call[edit]

Make sure you send this to Super Mario Bros. - not me, Marioguy1 (talk)

Wanna race on Mario Wifi. I saw you on a World wide race. {{subst:nosubst|User:Pixl Power/Sig}}

Thanks for the help with that image. I'm still somewhat new, especially to uploading stuff. Anyway, thanks a lot.

It doesn't matter. After all, the Luigi series is considered as a spin-off series like Wario, Yoshi and Donkey Kong, but there's no logic for the page to be a problem. :/--Prince Ludwig 09:38, 20 August 2011 (EDT)

Nope. I haven't. The Yoshi, Mario & Sonic and Mario & Luigi series do as well, especially of Super Mario Advance series for being remakes of classic games of the 8-bit/16-bit era. They have the same characters, of course. Their Baby counterparts from the Yoshi series begin to appear in many Mario series. In other words, all of the Mario games share the same characters.--Prince Ludwig 09:46, 20 August 2011 (EDT)

Ok. I understand your actions compleatly. I mean, if titels were going to be in italics, they'd already be in italics, wouldn't they? I shall not repeat this, I promise.

Thanks for being understanding. :) May the Yoshi be with you!

Remember to notify me if your section will be late!

Hi! I know you probably won't read this, but wanna be friends? Here's my userbox: |-

Well obviously. I don't understand why. If I don't want to be bothered with then I should be allowed to delete whatever I please. I'm fine with the fact I have these warnings. Why must I require so much annoyance on my page? What a huge flaw. I could just deliberately ban myself from deleting my own talk page. I am not just doing it because of my rebelliousness or rudeness which you probably already seem to assume. --Mechawave 12:52, 8 October 2011 (EDT)

So I herd you left me a message[edit]

I hope you had an excellent Halloween! Now it's time for the Pipe Plaza again, remember to tell me if you can't make the due date.

Please PM Marioguy1 your Pipe Plaza section on the forums (our forums, which one did you think?) by no later than December 10th. Please remember to save a copy in your outbox. If you can't, tell me, and I'll be sure to work something out.


In addition, this issue of The 'Shroom is a Special HOLIDAY Issue! In addition to your regular sections, you are invited to write one or more special guest sections on any topic, and should submit your special section on December 14th. Review a game you like, give us a Christmas story, play a game, maybe draw some Christmas artwork, there's so much choice! You are not required to write a special guest section for the Special Holiday Issue, but it is encouraged. There will be awards given out in the issue for the best writers for The 'Shroom, so be sure to impress us this month! Season's greetings to everyone, and an excellent New Year!

This is an important notice: the New Year Special Issue and the December issue have been merged together into the Holiday Special Issue. Please reread the special Holiday 'Shroom template above for updated information. · SMB (Talk) · 18:59, 4 December 2011 (EST)

Can you change it to this?--

Can I use the Tyranitar in your sig? I will place it on the left side of my sig, so nobody will think it's you.