Welcome to my page...of DOOM! ENTER IF YOU DARE!

JK. You can enter even if you don't dare. I am Red Snifit, but you can just call me Red. I've been here for a while. Not that long though. I joined on March 26, 2011. I discovered the site much earlier--on July 4, 2010. I am a HUGE Nintendo fan, but I mostly like Mario stuff. I am devoted to solving many Marioverse mysteries (like why the heck there's only one red Snifit in SMB2). The first console I got was a DSi (for Christmas of 2009), and the first Mario game I played was New Super Mario Bros. I invested many hours in playing it, and I finally beat every level, but still have a few to unlock. I haven't beaten it TOTALLY. Anyway, I got a Wii in May of 2009, and the first games I got were Wii Sports, New Super Mario Bros Wii, Super Mario Galaxy, and Mario Party 8. A little later I got Mario Kart Wii. I really want SMG2, but I still haven't beaten SMG, so I can't get it. At least I think I shouldn't. Then this year I FINALLY got a 3DS!!!!!! I just got the two Mario & Luigi games for DS, and most DS games work on the 3DS, so that's good news. (THE SHROOBS ARE COMING! THE SHROOBS ARE COMING!) I also have an iPod Touch, and am addicted to Angry Birds. Okay, so now you have a little of my gaming life history.

I am 12 years old and out of that evil place known as SCHOOL for the summer. I'm going into 7th grade now. I live in New Jersey and have lived there my whole life. I'm not saying what town I live in, in case anyone on this wiki wants to track me down and kill me. I'm not saying any of you would, but just in case. I think it's safe to say my state. Also, my birthday is on April 18. I have two little brothers. My parents think I spend waaay too much time online, which I admit I do. I have two cats, one dog, and one fish. My first cat is 20!! (she's ancient in cat years) and named Candy. She is very old and kind of annoying since she bugs us for food all the time. My other cat is Rocky, he's three and quite fat. He likes to steal Candy's food and my dog's food. My dog is 4. Her name is Zoey and she does not like other dogs. Oddly, she gets along fine with the cats. The fish, Peanut, is very old for a fish. I'm not even sure how old. He is also very fat. When he passes away, I won't get any more fish, because it's just wrong to keep fish in tiny tanks instead of their homeland. If you haven't noticed, I LOVE animals.

How I Discovered the Mario Wiki

It's kinda weird. I was looking up info on NSMBW, and found a walkthrough. The guy who wrote it credited Super Mario Wiki. I followed the link, checked out stuff, thought, This is SO much better than Wikipedia articles on Mario stuff! After a while, I started checking out other people's pages. (I like doing that.) This made me want a page of my own. Also I thought it would be cool to contribute and be a reason people know more about Mario. My dad helped me set up an account. And...this happened.

(I never got a chance to play any of the "old" consoles like the Nintendo 64 and the Gamecube, so that's why I only have two consoles.) My favorite game EVER was Super Mario 64 DS, but now it is the ULTIMATE Mario game, Super Paper Mario. It ROX! You're going to hear about the pure awesomeness of this game a LOT from me. Also I love Super Smash Bros. Brawl and I think it has amazing graphics, excellent gameplay, and pretty good, though hard to to understand, (I mean, the whole Subspace Emissary thing is just confusing) story.

(WHO SAYS I SHOULDN'T? Tell me you don't have favorites!)

RANDUMB Facts About Me

Randumb. It's a combination of random (which I am) and dumb (which I'm NOT). (But some of these facts might be.) (They're all true.) (parentheses overuse. I do that a lot.)

I like using Special:Random/Image. I will put my latest random pic here, and when I figure out how to position them properly you'll be able to see them a little better. Today I got these Burt Bros.! 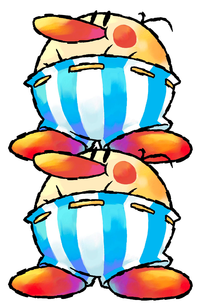 Note: If I don't update this in a long time, it's either because I'm lazy or it's hard to do pictures from my my iPod Touch.

Many Mario "fans" have something known as Bowser Jr Fan-itis, and others have Koopaling Fan-itis. Those Koopaling Fanites (including me and my brother) believe that Bowser Jr. should DIE. That's why I'm starting a club for people who would like to kill Bowser Jr. Together, we can convince Nintendo to forget him and focus on bringing back the Koopalings and restoring them to their rightful place! WHO'S WITH ME?