Level 4-6 is the sixth level of Spooky House in Mario vs. Donkey Kong. The high score for this level is 27000. 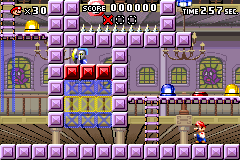