Castle of the Big Burt Bros.

“If it isn't the killjoy Yoshi! You're always trying to ruin my fun! But not this time! Burt Brothers! Crush this overgrown lizard!”
—Kamek, Yoshi's Island DS

Castle of the Big Burt Bros. is the first castle level, the fourth level of World 1, and the fourth level overall of Yoshi's Island DS. The level itself is notably similar to Burt The Bashful's Fort from Super Mario World 2: Yoshi's Island, in layout as well as the boss at the end. This level's playable Yoshi is the yellow Yoshi. 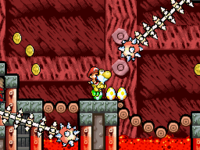 The second room of the level

The level begins with a simple and straightforward path leading to the right, where Yoshi comes across two yellow Egg Blocks. He may get a Yellow Egg from each one, then aim and fire them at the buckets above for coins. After this are two yellow pinwheels with a Shy Guy below each. There are coins in the area, some of which are Red Coins. Before Yoshi enters the door to the next section, he may hit a Winged Cloud and press the ! Switch that appears to reach and collect the first Smiley Flower in the level.

The next section begins with several spike traps operated by Shy Guys, as well as a number of coins along the way, including Red Coins. Between both the second Smiley Flower and the character coin for this level is a Middle Ring. An invisible Winged Cloud can be found in between containing five Stars. After this section, Yoshi must evade Red Blarggs, doing so by using a teal pinwheel to cross a large pit of lava. Before entering the door to the next section, Yoshi may aim and toss an egg at the above left wall to collect the third Smiley Flower.

As soon as the next room is entered, the fourth Smiley Flower can be seen in a chamber with two Burt Brothers. Yoshi must use a lift to reach the Burts, using the eggs from nearby Egg Blocks to defeat them if necessary, in addition to collecting the flower.

Following this, Yoshi must cross a large lava pit with horizontally moving lifts. Yoshi soon comes across three Winged Clouds overhead. There are three doors to the right, with one of them being locked and the other inaccessible. The left, middle, and right Winged Clouds contain coins, Stars, and a path to the above doors, respectively. Entering this door takes Yoshi to a small and darkened room with Piranha Plants and Lantern Ghosts. All of these enemies must be defeated to reveal and obtain the fifth and final Smiley Flower. Before Yoshi can move on, he must use the nearby lifts to reach a crate containing a key, allowing him to unlock the locked door and continue.

The upcoming room simply contains another Middle Ring and an Egg Block before Yoshi must enter the door to the boss room. As he enters, a pair of Burt Brothers hop in. Kamek arrives to enlarge them with his magic, turning them into the Big Burt Bros., whom Yoshi may easily defeat by collecting and tossing several eggs at them. Yoshi must simply avoid them bouncing around the room and use the Egg Plant to replenish if needed. After the brothers are struck multiple times, they are defeated, becoming red and deflating while bouncing around the room.