Mario's Fleet Feet is World 1-3 in the game Yoshi's Island DS. Super Big Tap-Tap and dirt walls first appear in this level. This level's playable Yoshi is the light-blue Yoshi.

This area is dry land. Heading right, it appears similar to the start of the previous two levels, although soon the player will see blocks made of mud and grass. Shortly after dropping on the aforementioned blocks, a Super Big Tap-Tap comes rolling in from above and left, destroying the blocks. Using Baby Mario, the player must dash across a stretch of blocks keeping away from the Tap-Tap. Seven Red Coins and the first flower are along the trail. Immediately right is a Middle Ring, and the passage to the next area.

The second area of this level has an ancient sort of theme to it. Players must throw eggs at dirt walls, another new addition for this level, to pass through one and clear the path to drop a bouncy arrow. After bouncing high up on the arrow, a section up and left can be accessed. Two of the M Blocks here contain two stars. To the right is a Piranha Plant and two Crazee Dayzees, followed by three Shy Guys on platforms. On the top platform an egg can be bounced off the wall to collect two Red Coins and the second flower. Right of here is a large dirt wall. Eggs can be thrown in such a way to make a passage of a sort, to climb up to a Red Coin in a secret area at the top. Right is an Egg Block, then a Chomp Rock. After defeating several enemies, there are two Red Coins above the Chomp Rock when it hits the wall. There is also a Winged Cloud containing five stars, immediately followed by passing to the next area.

Another ancient-themed area. A ! Switch is to the right, activating the climbable ! Blocks. Another ! Switch is available once over the blocks. If the player dashes across the newly generated ! Blocks, there is the third flower at the end. The player must then jump to the platform on the left, through the one-way doors, up the three following platforms, and to another ! Switch. This activates more ! Blocks for the player. Along the track is a 1-Up Mushroom in a Winged Cloud, another set of one-way doors, and after that yet another ! Switch. Across the blocks are several Pointeys blocking the way across, but by dashing and jumping they are easily avoided. There are two paths on the blocks. The higher path leads to three Red Coins, but the lower path must also be taken to continue to the next area. 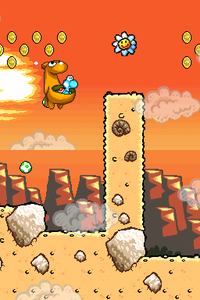 A third ancient-type area. The Message Block says how to do a Ground Pound. A crate can be Ground Pounded for stars if they are necessary, and two Ground Pounds of the pole will uncover a Red Coin. Right of here is another pole. Up and left of that pole is the way to a secret area. On top of the pole here is a Red Coin, then it can be Ground Pounded three times for a hidden Winged Cloud. Upon being hit, the cloud makes a rock staircase allowing players to access a Warp Pipe to Area 5. Area 5 is desert-themed, and contains a kangaroo. There are no Red Coins here, but there is the fourth flower of the level. Back down another Warp Pipe is a pole which can be Ground Pounded three times for a Red Coin. Right is a crate on a dirt wall which can be Ground Pounded right through to below the dirt wall. The crate contains Stars if they are necessary. There is a Red Coin above a pole, and the last Red Coin of the level is obtained by Ground Pounding said pole twice. Ground Pounding a cracked, reddish block exposes the fifth and final flower, and to the right is two Piranha Plants, two Shy Guys, and a wind current. Players can return to the level after World 1-5 with Baby Peach to float on the wind to grab one of her character coins. Immediately afterward is the goal roulette.