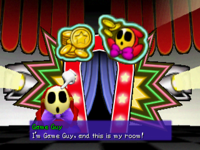 The Game Guy Room is the gambling room run by Game Guy, which appears in Mario Party 3. When the player initially enters the Free-Play area, there is a note pinned to Game Guy's door (the red door near the exit) that says that access is limited to the Miracle Star. This means that, in order to enter the room, the player must complete Story Mode with at least eight "S" ratings. The player can play any one of the four Game Guy minigames once they are granted access. Game Guy also offers the player a special prize if they win 1,000 coins from him during a single stay in his room. Each time the player exits the room, their coins revert back to zero. Therefore, they must remain until they win 1,000 coins. It is best for the player to bet low in Game Guy's Roulette and Game Guy's Magic Boxes, medium in Game Guy's Lucky 7, and high in Game Guy's Sweet Surprise. After the collection of 1,000 coins, Game Guy stops the competition and awards the player a special ??? minigame entitled Mario's Puzzle Party Pro. It is a one-player version of the 4-Player minigame Mario's Puzzle Party.