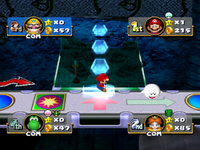 The Mystery Train is about to depart

“Ee hee hee hee... Good thing those Red Boos are gone! Now we can start the Mystery Train! Next stop, the Boneyard! To the Boneyard!”
—Boo, Mario Party 4

The Mystery Train is a vehicle of sorts found in Mario Party 4. It is featured in an event on the Boo's Haunted Bash board. The Mystery Train is composed of four ghostly coffins that shimmer in a translucent blue and hover above the ground. It can be found in a cemetery-like environment in the northwestern corner of the board and is managed by a Boo. The event is triggered automatically once a player passes by.

The Mystery Train event is affected by the presence of the Red Boos on the board. The player gets a chance to ride the train if the Red Boos are absent while the event is triggered. The player then gets on one of the four coffins and hover along the field. Any opponent that the train meets during its way gets picked up and rides the train as well. The person in the lead can decide in which direction the vehicle moved until it reaches a graveyard where the players are released again. The player who started the event continues to move forward, depending on the amount of steps they has left.