From the Super Mario Wiki, the Mario encyclopedia
(Redirected from Fire Bird)
Jump to navigationJump to search

Falco Lombardi is one of the main protagonists of the Star Fox series, the "ace pilot" of the team Star Fox and, due to his flying skills, the friendly rival of team leader Fox McCloud. He used to be the head of a gang, but bailed out to join the Star Fox team as Fox's second-in-command. Falco leaves the Star Fox team on occasions, and always reappears when needed. He has a very laid back but cocky attitude and is smart mouthed. Despite this, nothing gets in the way of Falco and Fox's friendship.

Falco made a brief appearance in the German Club Nintendo magazine comic "Super Mario: Verloren in der Zeit". He is watching the Olympics together with Fox and Peppy.

A 3D render of Falco from Star Fox 64 can be used like a stamp in Mario Artist: Paint Studio.

Falco is a playable fighter in Super Smash Bros. Melee. He is, however, unlockable, and is unlocked by beating 100-Man Melee or by playing 300 Melee matches, and then beating Falco on Battlefield. While his voice clips are mostly provided by Hisao Egawa, Ben Cullum voices Falco during the Adventure Mode Stage 6 cutscene or the Corneria Smash Taunt, and would later provide Falco's voice for Star Fox Adventures.

Falco's moves are exactly the same as Fox's, though his special moves have different attributes. Falco's Blaster has more of a forceful effect but isn't rapid-fire, and his Reflector attack blasts people upwards instead of sideways. His side special, named Falco Phantasm, possesses a meteor smash effect when used in midair though it does not travel as far as Fox Illusion, and his up special, Fire Bird, does not have as much reach as Fox's Fire Fox but can deal more damage. In addition, Falco has more attack power and jumps higher than Fox, while running slower and falling faster. Falco is also heavier than Fox, though is still one of the lighter characters.

Falco also appears in Stage 6 of Adventure Mode. In this, he, Slippy, and Peppy will appear in their Arwings in the second half of the battle to shoot at both the player and Fox. Additionally, if Falco is unlocked, he will sometimes replace Fox in the second battle, forcing Fox into the Arwing.

Falco returns as an unlockable character in Super Smash Bros. Brawl. To unlock him, the player must to play 50 Brawl matches, complete 100-Man Brawl, or having him join the party in The Subspace Emissary after clearing The Swamp; using one of the former two methods the player must then beat him on Lylat Cruise to unlock him. His design has been changed, appearing more similarly to his appearance in Star Fox Command rather than Star Fox 64, and is now voiced by Dex Manley for the English version.

Falco's moveset has been altered for this game, differentiating him further from Fox. He kicks his Reflector forward rather than holding it in place, and his Falco Phantasm travels as far as Fox Illusion. His Final Smash is the Landmaster, in which he summons one of the vehicles to drive and attack opponents.

Falco also has a Smash Taunt on the Lylat Cruise stage as well as on the returning Corneria stage.

Falco's snapshot in The Subspace Emissary

In the Subspace Emissary, he appears after Bowser shoots Diddy Kong (and uses him and some Shadow Bugs to create False Diddy Kong) and almost shoots Fox McCloud. Falco comes in with Arwing and jumps out with his guns to shoot and destroy Bowser's Dark Cannon (causing Bowser to retreat) and sees False Diddy Kong, Fox revives Diddy Kong and they all fight the evil clone. After defeat, Falco attempts to leave but Diddy Kong tries to tells him Donkey Kong has been kidnapped and turned into a trophy. Falco however ignores him, so Diddy Kong grabs Falco and drags him, just as he did with Fox when he ignored Diddy Kong. After Falco understands, he jumps inside his Arwing so they can follow Donkey Kong. Falco drops Diddy Kong off on the plane Donkey Kong is on, and he (with Captain Olimar and Captain Falcon) rescues Donkey Kong. Falco flies by in his Arwing giving a thumbs up at Diddy Kong.

After this, he wasn't seen again until the battle at the Battleship Halberd Bridge, where he joins Fox, Princess Peach, Princess Zelda, Lucario, and Solid Snake in defeating Duon. Once all of the teams unite, they enter Subspace, where they are defeated by Tabuu, with Falco being among the victims. King Dedede, however, comes to his aid with the help of Luigi and Ness, who were revived by Dedede's badges and are helping him revive most of the others. The newly revived Falco then heads with the others to stop Tabuu at the Great Maze once and for all. 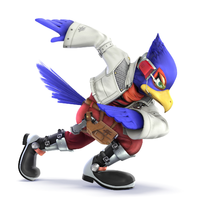 Falco returns as an unlockable playable character in Super Smash Bros. Ultimate, this time more closely resembling his appearance in Star Fox Zero. Compared to the previous installment, Falco receives improvements, such as increased mobility, decreased landing lag on his aerial attacks, faster special moves, and greater ability to knock opponents back for many of his attacks. However, Falco's damage output is slightly toned down overall. He has a new Final Smash, involving him leading an "unorthodox formation" of Arwings. Mark Lund reprises his role as Falco, though with newly recorded voice clips, such as saying "Come on!" rather than "Get some!" for his side taunt.

Several of Falco's attacks have names: down tilt is Tail Cutter; standard aerial is Spinning Falco Chop; and down aerial is Corkscrew Meteor. 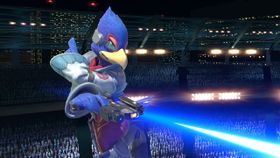 The Blaster is Falco's standard special move, which he shares with Fox and Wolf. When used, Falco fires a laser with a limited range to damage opponents. Falco's Blaster behaves similarly to Fox's original Blaster in Super Smash Bros., stunning opponents when hit and having a higher fire rate while in the air, though it cannot be fired as rapidly as Fox's current Blaster. As of Super Smash Bros. Brawl, the lasers from Falco's Blaster also have the longest range out of the three Star Fox characters, and shots also deal electric damage. In Super Smash Bros. Ultimate, Falco's Blaster has a slightly faster firing rate, while dealing slightly more hitstun. 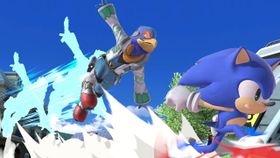 In Super Smash Bros. for Nintendo 3DS and Super Smash Bros. for Wii U, Falco Phantasm's first custom variant is Falco Phase, which makes Falco invincible for the duration of the move, although the move itself does not inflict damage on opponents. The second variant is Falco Charge, which deals increased damage and knockback at the beginning of the move, but does not travel as far.

"Fire Bird" redirects here. For information about the enemy from Mario vs. Donkey Kong, see Firebird. 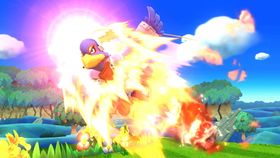 Fire Bird in Super Smash Bros. for Wii U

Fire Bird is Falco's up special move. Upon executing it, Falco charges up the move, surrounding himself in fire that damages nearby opponents before launching himself in the direction the player is holding the control stick. Compared to Fox's Fire Fox and Wolf's Fire Wolf, Fire Bird hits several times while Falco is moving before dealing a more powerful hit with greater knockback at the end. However, Falco does not fly as far as Fox or Wolf using their up special moves, traveling the shortest distance of the three. Like Fire Fox, hitting a surface while using Fire Bird causes Falco to bounce off of it, ending the move.

In Super Smash Bros. for Nintendo 3DS and Super Smash Bros. for Wii U, Fire Bird's first custom variant is Fast Fire Bird, which does not have a charging period, but also does not travel as far and deals less damage, only hitting one time. Its second variant, Distant Fire Bird, takes longer to charge up and moves more slowly but is more powerful and travels farther; the charging also does not deal damage and the final hit is removed, instead dealing a more powerful hit when Falco begins moving. 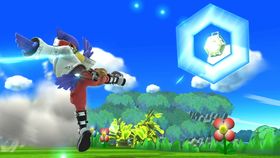 Falco's Reflector in Super Smash Bros. for Wii U

The Reflector is Falco's down special move, shared with Fox and Wolf. Like Fox's Reflector, when used in Super Smash Bros. Melee, an energy barrier surrounds Falco, reflecting any projectiles that collide with it and increasing the amount of damage they deal when they hit. The barrier itself can also damage nearby opponents (although Falco's knocks opponents back at an angle), though it can shatter if hit enough times, leaving Falco dazed as if his shield broke. In Super Smash Bros. Brawl onward, Falco instead kicks his Reflector at opponents instead of holding it in place; while it still deflects projectiles and damages opponents, it no longer protects Falco from physical attacks. 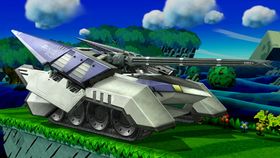 Falco's Landmaster in Super Smash Bros. for Wii U

The Landmaster is Falco's Final Smash in Super Smash Bros. Brawl and Super Smash Bros. for Nintendo 3DS / Wii U, shared with Fox and Wolf. It is a powerful tank vehicle introduced in Star Fox 64 / Lylat Wars, used by the Star Fox team in ground missions, although its design is specifically based on its appearances in both Star Fox 64 and Star Fox: Assault. Upon activating the move, Falco leaps into the air and falls back down inside the Landmaster. It functions and controls the same as Fox's Landmaster; compared to it, however, Falco's Landmaster has weaker shots and battering damage, but a stronger barrel roll with less knockback, and the cannon shots deal more damage when opponents are standing on it. It also flies faster than Fox's, though it is the slowest on the ground.

Falco appears as a Costume in Super Mario Maker. Falco's costume can be unlocked by scanning his respective amiibo or randomly by completing the 100 Mario Challenge on expert difficulty. His sound clip from the original SNES Star Fox game is used when the player uses the Falco costume.

Falco is a pilot from the Star Fox series. He’s a cool customer who likes doing things his own way.

He has the best initial jump of all the characters, and he likes shooting his Blaster as he leaps about.

Note: this is the only codec conversation where Snake is given information from someone other than his team members, due to Falco's own teammate, Slippy Toad, hacking the channel (which does not occur for Fox's codec conversation).

"He's a talented aerial fighter with amazing jumping ability, but Falco is a bit slower on the ground. His final smash is an all-out attack using an unorthodox formation of Arwings!"