Mario's (when he's not wielding a Bazooka) Underground Workings

From the Super Mario Wiki, the Mario encyclopedia
< User:Bazooka Mario
Jump to navigationJump to search 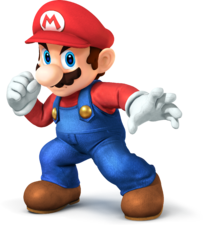 This is what it's going to look like once all recolors artwork is uploaded. Not like this in its current state, idiot, but it's an idea. Finally, so we can maintain consistency, the shadowless artwork and that sexy Mario without fire artwork will have its own section.

Power refers to the multiple power-ups a player can use in Smash Run, exclusive for Super Smash Bros. for Nintendo 3DS. Powers cannot be modified through the normal custom menu, so players have to add powers to their character while customizing in the Smash Run screen. 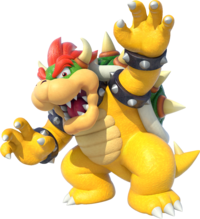 Not much is known about the species of Koopa to which Bowser belongs. The only members appear to be Bowser, Bowser Jr., the Koopalings, and the Koopa Kids. Their most notable feature is their spiked shells, similar to a Spiny. Unlike a Spiny however, members of this species of Koopa stand upright, and are typically much larger than most types of Koopas upon reaching adulthood. Even as a child, Bowser Jr. is almost as tall as a full-grown Koopa Troopa.[1]. However, Lemmy Koopa is actually almost as small as Toad[2] while his younger brother Larry is bigger in size[3][4], showing that some variability in size exists among Koopas belonging to Bowser's species. A unique feature of this species is that their shells don't entirely cover their whole body. Instead, their shells only cover their backs while only having a padded stomach in the front (that could be part of their shells). These Koopas are known for their strength, sometimes the ability to breathe out flames, and durability, even as children, as well as magical powers; they typically are the leaders of the Koopa race. Unlike Koopa Troopas, Bowser's species don't have a beak. 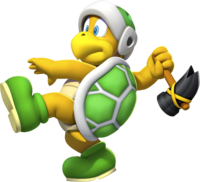 Hammer Bros. (or Hammer Brothers) are a type of Koopa that stand upright, wear helmets and throw hammers at passerby. There are various similar Koopas who throw other objects at their opponents, such as the Boomerang Bros. and the Fire Bros., the latter of which spits its projectiles from its mouth, instead of pulling them from thin air. All of these Koopas have similar shell patterns, and beaks that are lighter in color than the rest of their face, both of which sets them apart from Koopa Troopas, which are also slightly smaller. 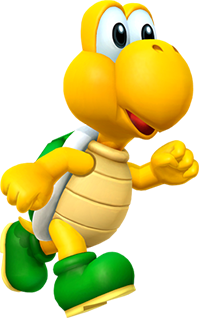 Koopa Troopas (often shortened to plain Koopas and occasionally to Troopas, Japanese ノコノコ Nokonoko) are common enemies in the Mario series. While some are peaceful, Koopa Troopas are usually displayed as foot soldiers of the Koopa Troop under the direct leadership of Bowser. They are considered to be the archetypal Koopas, as they have no special abilities like Hammer Bros. or Lakitu. Throughout the Mario series, Koopa Troopas have appeared as both quadrupedal creatures (four legged) and bipedal (walking on two legs). Since their debut in Super Mario Bros., Koopa Troopas have appeared in almost every game, usually as enemies, but also as playable characters in numerous spin-offs and the first two Paper Mario games.

Super Mario-Kun Volume 3 continues the arc based on Super Mario World. Mario, Luigi, and Yoshi continue in their travels to rescue Princess Peach from Bowser. It features a Rex and a Dino-Torch as Yoshi's friend. Along the way, Mario and his friends participate in Bowser's Prisoner-Ball game, fight a Buzzy Beetle construction crew, fight familiar enemies from Super Mario Bros. 3 and Super Mario Land, escort a Boo baby, and many more. They also fight and defeat Wendy O. Koopa twice along the way. The volume contains eleven chapters, labeled as levels.

The chapter begins with Mario, Luigi, and Yoshi in the forest. Yoshi has invited Mario and Luigi to see his friend, Rex. Rex has fled Bowser and has set up a secret base. Mario makes a playful confusion with Doraemon and Rex.[5] Mario and Luigi, however, become ensnared in a rope trap. Yoshi tries to help, but bumps into a wasp hive. Rex then reveals himself to have set up the trap and believes that Mario and Luigi are Bowser's minions. Mario and Luigi deny this and beg Yoshi to explain for them. Rex mistakes Yoshi for a monster because Yoshi's face is swollen from the wasp stings. Yoshi proves himself by asking Rex to remember the times he and Yoshi when Yoshi used his tongue to grab him. Convinced, Rex apologizes and shows Mario and Luigi his secret base.

A Magikoopa and a Koopa Troopa (labeled as number 3) discover the cave. The Koopa Troopa tries to ambush, but Magikoopa quickly stops it. The Magikoopa then summons a mind-controlling shell to force Rex to capture Mario and Luigi.

In the cave, Yoshi asks for something to eat. The magical shell attaches itself to Rex's head and brainwashes him to eliminate Mario, who is Rex's enemy. Rex decides to prepare a toxic soup to poison him. Mario hesitates to eat it, but Yoshi tries reassuring him that Rex is a good chef. Yoshi cannot control his appetite, however, and quickly eats it, while Mario complains that Yoshi did not even leave the bowl. Yoshi then shows signs of sickness, and Rex gloats, asking Yoshi how the poisoned dish is, shocking Mario. Yoshi happily digests it, causing Rex to swear and realize that Yoshi's stomach is tougher than lead. Mario demands Rex if Rex intends to poison him. Yoshi asks for seconds, but Mario shouts and warns that Rex is trying to kill them. Yoshi denies it, alleging that Rex is harmless, but they immediately get hit by Rex's flamethrower. Meanwhile, the Magikoopa decides that it is enough and gives Rex powers.

Rex grows enormous and is about to stomp Mario. Mario steals his shoe and attempts to use it as a Goomba's Shoe to hit Rex, much to Yoshi's dismay. Rex's smelly foot disgusts Mario. Yoshi is relieved, but Mario, getting pummeled by Rex, wishes Yoshi has paid more attention to him. Yoshi snaps and tells Rex to stop and remember good memories. Rex recalls only unpleasant memories and hits Yoshi with his foot. The Magikoopa gives Rex functional wings as part of the Super Rex form to try to finish Mario and his friends. Mario cannot fight back, but he finds a ! Switch and causes ! Blocks to fall on Rex. The magical shell falls from Rex's head and reverts Rex to normal. Luigi discovers the Magikoopa underneath the blocks. Mario and Yoshi realize that Kamek is behind Rex's bad actions, so they attach the magical shell on the Magikoopa's head. Mario forces the Magikoopa to dance, and the Koopa Troopa remarks how badly the Magikoopa is dancing.