Should we merge this with Shy Guy?

If we ended up merging the sections, would the article be renamed to Black Shy Guy (Paper Mario series) since we use the most recent English name? Also, I'm not sure if they should be merged, as they have the same shoe color and mask color as a normal Black Shy Guy (along with the English name). --

Do you know if they have the same name as Anti Guys in any other language? I just don't know if there are enough differences at the moment to merge. --

Bumping this, anyways, given certain examples of our naming system being circled, I'd say the best thing here would be to go with most common name, and since more people have played the original Paper Mario (which is iconic) than Color Splash (which many are too apprehensive to buy after Sticker Star), I'd say we'd go with Anti Guy. Unless of course you'd prefer to keep it as-is. Doc von Schmeltwick (talk) 04:38, 25 October 2017 (EDT)

Merge with Shy Guy, split Shy Guy according to color, or delete this page[edit]

do nothing 0-2-0-7
This might be one of the most ridiculous problems on the wiki. Why do we have this page and White Shy Guy when other colors like red and green don't have their own articles? Seriously, why? Are black and white Shy Guys any different from other colors? So what if they had special effects in Yoshi's Story? For consistency reasons, we must merge this and the white page with Shy Guy, make more Shy Guy articles, or delete this page and the white page.
Proposer: YoshiFlutterJump (talk)
Deadline: Monday, November 20, 2017, 11:59:59 PM GMT

@Doc von Schmeltwick: The games consider Stretch Guys a variant of Shy Guys, but games like Paper Mario: Color Splash called each Shy Guy by their color, as if each color was a variant. If red and green aren't variants, surely black and white aren't either. Also, just to clarify, when I said "So what if...", I actually meant "What does it matter that...", and "they" referred to black and white Shy Guys, so I was basically asking "Does it really matter that Black and White Shy Guys have a few special abilities?" And what about the Yoshis? It's not in every game that they have different abilities. Since the Yoshis have separate articles, give me one reason why we shouldn't do the same with Shy Guys. -YFJ (talk · edits)

Yes, it does matter, as they're extremely unique. Black Shy Guys act like D-Bats and Omodonmeka, which is such a far cry from other Shy Guy behavior that it warrants an article. However, given that the pink shy guys in SMB2 became blue in the remakes, while the red, yellow, green, and pink Shy Guys of Yoshi's Island were literally interchangeable (and often interchanged), as were the ones in Yoshi's Story and Paper Mario, I'd say that those don't deserve their own articles. Doc von Schmeltwick (talk) 04:04, 6 November 2017 (EST)

Not to be rude, but you still haven't answered my question about the Yoshis. The black and white Yoshis were special, but eventually each Yoshi had his own article. Why do we have articles on each Yoshi color but not Shy Guy colors? It doesn't make sense. -YFJ (talk · edits)

Because every Yoshi is special in many games. Super Mario World? Had their own abilities depending on shells. Yoshi's Story? Had different favorite fruits, and I think jumping distance varied a bit as well? Super Mario Sunshine? Platforms do different things. Doc von Schmeltwick (talk) 14:27, 6 November 2017 (EST)

Also, I'd like to point out that Lantern Ghosts, a type of Shy Guy, also come in color variations. Do you think those should be split? How about the various palette changes in Super Mario Bros. caused by the limited palette depending on location (with brown things becoming blue underground, grey and black underwater, and grey in castles, while green things become turquoise and orange underground and in castles and grey underwater)? They do the same things as normal, but they're different colors, and since in all but a very small amount of games differently-colored Shy Guys typically act exactly the same, you're basically saying those should be split as well. Doc von Schmeltwick (talk) 17:04, 6 November 2017 (EST)

I recall there being arguments against splitting color variants. Why should various Shy Guy colors be split when something as basic as Koopa Troopa is a no-go? LinkTheLefty (talk) 17:15, 6 November 2017 (EST)

By the way, the Yoshi's Story info wouldn't be merged with Shy Guy, it'd be merged with Propeller Shy Guy, as that's what it's derivative of in that game. Doc von Schmeltwick (talk) 20:08, 6 November 2017 (EST)

I have a link that could solve the problem of no other Shy Guy models in Mario Kart 8/Kart 8 Deluxe. https://steamcommunity.com/sharedfiles/filedetails/?id=406961489 I know you may have rejected the Wario World Magon, Cracytal, Ankiron, and Clubosaur image before, but if any of you can liberate these Shy Guys, it would be very nice. Just make sure to give them normal standing other than the T pose. --Hamshamcart (talk) 12:09, 22 December 2018 (EST)

And here is the guy himself who got these models:https://www.youtube.com/channel/UCzaQEP2Se2L0Tx5O0UyZdUg/discussion Be sure to ask him to give all the Shy Guys to this wiki. ;)--Hamshamcart (talk) 10:15, 24 December 2018 (EST)

Since Doc removed the more images template on this page, let's upgrade the quality for this Bowser minion just like the Pink and Cyan Shy Guys. 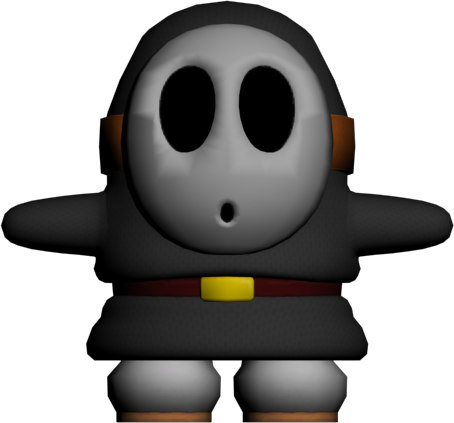 I think it's time to start this discussion anew. The Baseball, MKDS, and MK8 info just don't belong on here, as they are treated equally to any other Shy color in those games. Now, the rest. The Story one is a derivative of the Propeller Shy Guy, while the CS one is the same as Anti Guy. As such, according to our rules and logic in general, these should be split into "Black Shy Guy (Yoshi's Story)" and "Black Shy Guy (Paper Mario series)," with the latter being merged with Anti Guy. Thoughts? Doc von Schmeltwick (talk) 01:55, April 22, 2019 (EDT)

I want to additionally iterate that the only reason the PM stuff wouldn't be merged like the other colors is because it was the only color given any sort of naming or stat differentiation in the original PM, even if it's no longer the case in CS. Doc von Schmeltwick (talk) 03:15, April 22, 2019 (EDT)

While i agree to merge certain sections with Shy Guys, i'm not too sure about the Paper Mario ones. --


See above. In Yoshi's Story, Black Shy Guys are a variant of Propeller Shy Guy. In Paper Mario: Color Splash, it's a retranslated Anti Guy. In the rest, it's treated equally to any other color of Shy Guy (or even worse, just be a variant that happens to wear black). How this would go down is that either the PM info would get the main "Black Shy Guy" title as it's an in-game name, the Story info would be moved to "Black Shy Guy (Yoshi's Story)," and the rest removed outright, or a diambig page made due to the generic recolors appearing. I suppose we can cross that bridge when we come to it.

As an aside, have black Fly Guys made an appearance at any point? I've been thinking that the Propeller Shy Guy situation may not be as clear-cut as once thought given the Japanese names and the fact that the Prima reference for "Flying Shy Guys" doesn't distinguish the two. LinkTheLefty (talk) 11:30, February 16, 2020 (EST)

Small versions of "normal" Fly Guys appear, though given Fly Guys' appearance in PiT and unused appearance in SPM, it wouldn't surprise me...anyways, no, aside from one frame of Whirly Fly Guy, I can't think of a single instance. Doc von Schmeltwick (talk) 13:51, February 16, 2020 (EST)

I see. I'll probably follow-up on that topic sometime afterward. Also, how would you feel about a "merge everything" option (or at least, an option to only keep the Yoshi's Story variation on the page given that it's the only one that isn't a color variant of regular Shy Guy and is clearly in contrast to the game's White Shy Guy)? Since Black Shy Guy is the latest in-game name in the Paper Mario series, I think Anti Guy may safely be considered a color variant of regular Shy Guy. LinkTheLefty (talk) 07:51, February 18, 2020 (EST)

Thing about Anti Guy though is that initially, it was different in a game where there were four colors of "normal" Shy Guy that weren't differentiated at all. Doc von Schmeltwick (talk) 13:19, February 18, 2020 (EST)

Decide what to do with Yoshi's Story information[edit]

split 1-4-0
So my previous proposal on this subject was a bit lacking in attendance of voting, so I've decided to take this one step at a time rather than all at once. First of all, the Yoshi's Story entity is a type of Propeller Shy Guy (which itself seems more and more like an alternate design to Fly Guy, but that's another issue for the future), while the other appearances are based on normal Shy Guys.

I see two ways to go about this:
1: Merge Yoshi's Story info to Propeller Shy Guy outright: the enemy is given its name in a header for a Hint Block message (Black Shy Guy?: This Shy Guy does not look yummy. Eating him might hurt the tummy.) The specifics for the message and the fact that generic black Shy Guy art exists for the game may indicate other types of Shy Guys were at some point meant to have a "black" coloration and only Propeller Shy Guy's remained in the final, meaning this may have been intended as a general description of something to avoid rather than a specific name for this enemy (thus, "black Shy Guy" and not "Black Shy Guy," which is effectively confirmed by the Japanese version of the block's message being parsed as くろい ヘイホー with a space between Kuroi and Heihō, making Kuroi a generic adjective). Either way, it is a color variation, albeit unique compared to how normal ones act (though both the normal type and this type each have multiple behaviors), and the evidence that Fly Guys may be the same thing as Propeller Shy Guys supports the behavioral uniqueness not mattering so much.

2: Split into "Black Shy Guy (Yoshi's Story)": That being said, the PRIMA games coverage still treats it as a name, and the behavioral differences are rather notable.

The Shogakukan guide names it 「黒ヘイホー」 (Kuro Heihō, Black Shy Guy), and it's consistent about this name throughout the guide instead of referring to it as another flavor of Fly[ing Shy] Guy (プロペラヘイホー). For reference, the Player's Guide refers to it as "black Shy Guy" and Prima guides refer to it as "Black Shy Guy" as well. That places me against the first option, but before I redecide where I fall on this, how will the parent/variant species relationship be organized if the proposal passes? I alluded to it being a potential gripe in the Anti Guy talk page comments. LinkTheLefty (talk) 10:14, April 25, 2021 (EDT)

This would be treated as a relative of the "normal" Black Shy Guy, with a mainarticle section noting the artwork and such. Doc von Schmeltwick (talk) 14:29, April 25, 2021 (EDT)