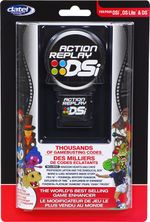 The retouched Bowser artwork is on the bottom right of the package above the soccer player.

In the "Driving's No Game" advertisement for Budget Direct, as the video game character's car repairs itself after T-boning the human's car, coins designed after those from the Mario franchise are taken from him.[1]

The advertisement showing two children using the shoes to jump and reach a coin.

Throughout 2016, Canguro scarpe (meaning "Kangaroo shoes") have broadcasted an Italian advertisement for childrens shoes, showing two children playing a gaming console on a television set in their family home. The television's screen shows animated children within an Acorn Plains-like level in New Super Mario Bros. U, with colored platforms and a background resembling the one seen in Yoshi Hill. The children's ability to jump high and reach a coin within the level is exaggerated by the bright colored Canguro-branded shoes that they are wearing.[2]

The game's appearance in the ad.

In 2015, Super Mario Bros. is referenced in the Cheerios Game On advertisement[3].

A TV advertisement for the original Crash Bandicoot game features a man in a Crash Bandicoot mascot costume yelling taunts through a megaphone at Nintendo of America's headquarters, while he showcases and promotes the PlayStation. Among the lines he says are, "Hey, plumber boy, mustache man, your worst nightmare has arrived". He is ultimately told to leave by a nearby security guard.[4]

Croc: Legend of the Gobbos[edit]

A magazine advertisement for the game Croc: Legend of the Gobbos shows the main character, Croc, using a toothpick after having presumably eaten several other characters, whose various accessories are shown lying in front of them; one of these objects is a red hat with an "N" on it, in reference to Mario's red cap. 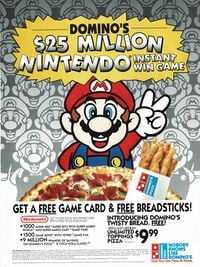 A print advertisement from 1992. 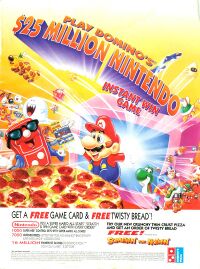 A Nintendo Power advertisement also from 1992.

Mario was featured in two advertisement campaigns by Domino's Pizza. The first one took place in 1992, when Domino's customers could receive a scratch card and had the chance to win various Nintendo consoles and games.[5] Another giveaway took place in 1993.[6] Commercials for both giveaways feature animation from the Japanese Super Mario Kart commercial.

Fruit by the Foot[edit] 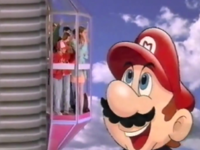 Mario in the first commercial. 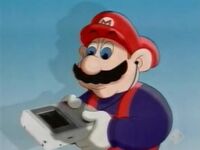 Mario in the second commercial.

The first commercial shows him watching people play on their Game Boys in a building. It features an animation of Mario winking at the camera, which is reused in a Super Nintendo Entertainment System commercial.[9][10]

A second commercial briefly shows him playing on a Game Boy and wearing headphones, a frame of which is also shown in an advertisement for Energizer batteries in a Portuguese Club Nintendo magazine.[11][12] 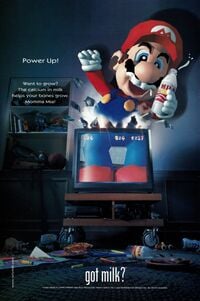 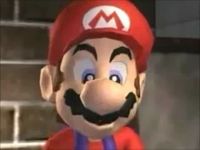 Mario appears in a Got Milk? commercial. In the commercial, two kids are playing Super Mario 64 and trying but failing to jump across a set of blocks from the level Wet-Dry World. After the kids leave, Mario then jumps out of the television screen and interacts with various objects in the house (including a soccer ball and a green object of some sort) before being flung by a skateboard inside the house's refrigerator, where he drinks a large swig of milk, causing him to power up and grow a considerable amount in size. Mario then leaves the refrigerator and jumps all the way back into the game, where he is much larger thanks to the calcium-filled milk helping his bones grow and is shown to be able to easily climb the set of blocks like stairs.

Despite showing gameplay of Super Mario 64, the commercial does not use actual in-game footage, as evident by the smoothness of Mario's model and the animation of Mario hitting the wall (which is not an animation that is present in the actual game). The music is also not actual music from the game, possibly due to copyright-related reasons.

Mario appears in a Growth Spurt commercial[dead link], promoting the iPhone XS and its larger variant. Mario grows bigger and runs through Brick Blocks and Goombas, similar to Mega Mario. 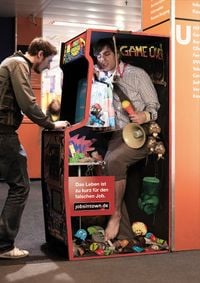 The jobsintown advertisement. When the tagline is translated, it means "Life is too short for the wrong job."

The German job search website jobsintown.de released a series of advertisements featuring various people uncomfortably working "inside" of automated machines, such as ATMs and vending machines. One advertisement with an arcade machine contained a few references to video games, including lookalikes of Mario, some Goombas, a Mega Mushroom, and the Ghosts from the Pac-Man series.[13]

An anti-drug commercial featuring Lou Albano, which aired on Philadelphia's WPSG, showed him wearing Mario's cap, although the rest of his outfit was different and he introduced himself as "Captain Lou Albano". [14]

A TV commercial for Kellogg's Froot Loops involves a man and his wife sitting at a couch after their kids are asleep. After the wife pulls out a box of Froot Loops, the two share a bowl of it while playing Super Mario Bros. on an NES together.[15] A small caption on the bottom of the advertisement states that Super Mario Bros. is available to download on the Nintendo eShop.

In a commercial by Kia, a sales representative Dan O'Brien titled "Super Danio World", an animated version of Dan is seen running through a Super Mario Bros.-themed level, hitting silver blocks with the Kia logo on them that produce cars.[16] 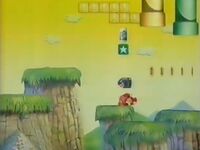 Beginning of the commercial 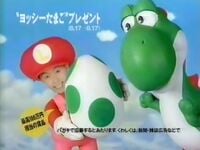 End of the commercial

A commercial for Kirin Lemon centers around a man in an outfit similar to Mario's travelling through various terrains in Super Mario World. Several enemies such as Bullet Bill and Mega Mole have brief appearances, but the commercial mostly focuses on the man and Yoshi.

Mario is depicted in a Kraft Macaroni and Cheese commercial. The macaroni is shaped like different objects from the series. He performs multiple actions involving macaroni and/or cheese, such as hitting the Kraft logo, which makes slices of cheese appear, or swimming with fish that resemble blocks of cheese. Yoshi and Bowser also make appearances in the advertisement.

In the McDonald's TV commercial "Archenemies[17]," numerous different arch enemies are seen setting their differences aside over various McDonald's foods. Among them are Mario and Bowser. In the commercial, Mario makes amends to Bowser by giving him a potted Piranha Plant.

There have been several more McDonald’s ads released for Mario Happy Meals throughout the years. 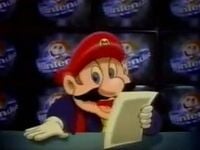 Mario appears as a news broadcaster in a French commercial for Mega Man 2.[19] 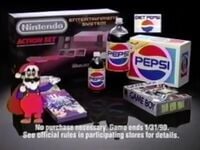 In a Pepsi commercial from 1989, Mario is seen walking through a store while dressed up as Santa Claus. Customers who bought Pepsi products at the time had a chance to win a Nintendo Entertainment System Action Set (which included a Zapper), game cartridges, and a Game Boy.[20] 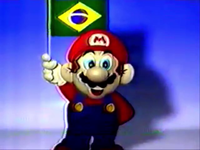 A commercial for Playtronic, the company responsible for distributing Nintendo games in Brazil from 1993 to 1996, features Mario holding the Brazilian flag.[21]

The Santa Fe Reporter infrequently featured an advertisement for Reynolds Insurance, Inc.; which claimed that their company "...gives a homeowner like Lewis the time to surf the Internet or conquer Lemmy Koopa's castle in Super Nintendo." The ad first appeared on February 14, 1996[22] and was last seen on November 11, 1998.[23] 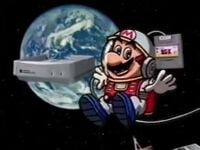 Mario appears as an astronaut in a televised commercial and printed advertisement for the Japan-exclusive Satellaview.[24]

A TV advertisement for the original Sonic the Hedgehog and the Sega Genesis.[25] compares them to Super Mario World on the Super Nintendo Entertainment System, boasting that the package deal was "faster" and $50 less expensive than Nintendo's product. Despite the salesman's best efforts to flog Super Mario World, the kid from whose POV the commercial is shown is drawn to the TV showing the Sonic footage over the Mario screen and insists on buying it and the Genesis.

A similar TV advertisement shows a woman ranting on Sonic the Hedgehog, eventually asking "Why can't he be more like that nice boy, Mario?"

One year later[26], Sega would make a now-infamous commercial boasting that the Genesis had "blast processing", whereas the SNES didn't. As a show of what blast processing supposedly did, a drag racer with a TV screen strapped to it raced down a drag strip; the TV didn't show any footage, but scenes from various Sega games, including the then-new Sonic 2, were shown as the car drove past. As a show of what happened if one did not have blast processing, a beat-up minivan, also with a TV strapped to it, barely put down the same track; the TV showed Super Mario Kart. 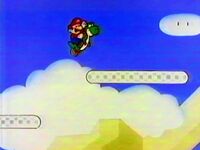 Mario and Yoshi are seen running through a level of Super Mario World in a Soprole commercial. Customers who bought Soprole yoghurt had a chance to win a Super Nintendo Entertainment System, Mario shirts, or a Mazda 121.[27] 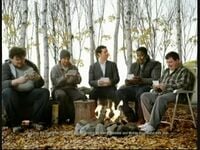 A group of men playing Mario Kart DS in the commercial

In one segment, when describing using the 4G connection to play games online, five people are shown to be playing Mario Kart DS on white Nintendo DSis. They are on Luigi's Mansion, and out of the five, one is Mario, and another is Yoshi. At the end, one of the men shouts "Eat it, Yoshi!" as an item sound effect plays. 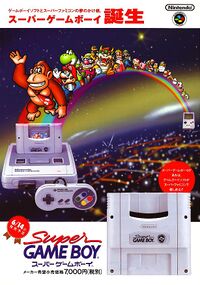 An international Super Game Boy commercial depicts a gray-colored Mario flying from a Game Boy to a Super Nintendo Entertainment System, creating a rainbow. The commercial ends with various Nintendo characters walking through the Game Boy screen and across the rainbow,[28] which is also shown in a Japanese print advertisement.

In a 2017 Christmas commercial, Mario and Cappy are shown helping a family get their home ready for the holidays alongside several other characters from non-Nintendo series.[29] 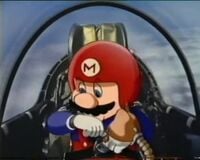 Mario appears as a fighter jet pilot in a French commercial for Top Gun: The Second Mission on the Nintendo Entertainment System.[30] 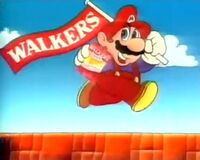 Walker's Crisps featured Mario in a commercial where Walker's is advertising their Nintendo Entertainment System giveaway.[31]

To celebrate football player João Mário being loaned to West Ham United F.C., a short promotional video was released concurrently on Facebook, Twitter, and YouTube. Featuring graphics that are based on those of Super Mario Bros., the video shows Mário coming out of a Warp Pipe and hitting a ? Block, with a soccer ball appearing and bouncing away. A hashtag then appears, designed to look like Super Mario Bros.'s title screen, and Mário then runs off after the soccer ball. The sprite used for Mário, however, resembles Mega Man's classic sprite more so than Mario's.

One Xfinity commercial has a TV briefly displaying gameplay footage of Mario Kart 8.