World 2-4 is the fourth level of World 2 in New Super Mario Bros. 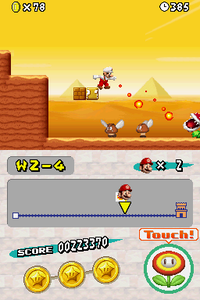 Fire Mario attacking one of the level's Piranha Plants

This level starts out with a seemingly flat desert surface. Three ? Blocks and two bricks can be found high in the air. By pressing a nearby ? Switch, the flat desert quickly raises into the form of a steep hill, allowing the player to access the aforementioned blocks. After a few steps, the player encounters a Goomba. Near the Goomba are six coins caged in by bricks. The player must Ground Pound the bricks if they wish to collect the coins. Past the first pit, the player finds two Goombas and two Koopa Troopas, surrounded by bricks and ? Blocks. Past this point, the player encounters another small pit, followed by two Koopa Troopas and a Koopa Paratroopa. If the player stays on the lower ground level and continues rightward, they see a warp pipe inhabited by a Piranha Plant. By Wall Jumping over the pipe, the player can collect the first Star Coin. When the player heads upwards and walks to the right, they encounter a Koopa Troopa, a Goomba, and a downward staircase that has many Piranha Plants inside of Warp Pipes. The player can defeat the Piranha Plants with a single Koopa Shell. At the bottom of the staircase is a shallow bed of water. To the left is a small pipe, which can be accessed by using a Mini Mushroom. To the right are two more pipes containing Piranha Plants. A P Switch can be found on a small chunk of land. By pressing it, several Blue Coins appear for the player to grab. Past the area with the P Switch are two paths the player can take.

By going up the staircase, the player encounters a Goomba and three more Piranha Plants. Just past the Goomba is a small gap in the upper part of the wall. By wall jumping repeatedly, the player can collect several coins. As the player reaches the top of the stairs, a bridge with two Koopa Troopas can be found.

A narrow path resides to the right underwater. At the end of the path are two pipes. By entering the red pipe, the player is taken to a secret underwater area. In this area, several coins and two Cheep-Cheeps, one of them with a trail of coins following behind it, are found. At the other side of the underwater area, there is a Warp Pipe on the ceiling. By using this pipe, the player is taken underneath the aforementioned bridge. The second Star Coin can be found under the bridge. Then, by pressing the ? Switch, the ground rises, allowing the player to get onto the bridge.

Farther right, a Paragoomba is encountered. As the player continues, two blocks and a Piranha Plant are found. One of the blocks contains a ? Switch, and the other contains a power-up. The midway point can be found there. By pressing the ? Switch, the ground beneath the Piranha Plant rises. If the player rushes to the right and goes over another hill, they can gain access to a higher elevation, allowing access to the rest of the level. Past there are two Hammer Bros. guarding the final Star Coin. After the Hammer Bros. is a staircase with a Koopa Troopa, followed by the pole.

Mario has to be Mini Mario to get to the red-flag exit. He needs to take the small pipe that is left of the upward and downwards path. This is the only red-flag exit in the game that is found before the checkpoint.