World 2-6 is the last level before the Castle of World 2 in New Super Mario Bros. 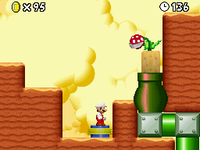 This level starts out with a pit full of quicksand that has a yellow Warp Pipe buried in it. The player must hop across the quicksand and the yellow pipe in order to make it to the other side of the pit. On the other side of the pit, two ? Blocks can be found, followed by a red pipe. The player must enter this pipe to continue. After Mario exits the pipe, he appears on a lift, which starts moving to the right when Mario touches it. As the player continues forth in the level, they encounter several coins, some of which are surrounding three ? Blocks. A little bit further into the level, the player begins to encounter a few Piranha Plants that ride on their own lifts. Their lifts intersect with the one Mario is riding on. Eventually, Piranha Plants are placed on the same platform as the player, providing an additional challenge to the level. More ? Blocks can be found throughout the level, some containing coins, while others contain power-ups. As the level progresses, more Piranha Plants and a Super Piranha Plant are encountered. Eventually, the player has to jump off of the original platform, and hop on smaller levitating platforms. When the player encounters a Venus Fire Trap, there are only a few more levitating platforms to jump on before solid ground can be reached. Once Mario is on solid ground, he has to use a pump to unblock a green pipe, which was blocked by a cork that has a Piranha Plant on it. After Mario exits the pipe, three more levitating platforms and a Piranha Plant can be found, followed by the pole.