Castle is the castle and last level of World 3 in New Super Mario Bros.. The boss in this level is Cheepskipper. 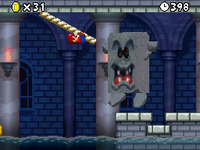 The beginning of this level is filled with Skewers that damage Mario if touched. On the fifth Skewer, Mario can get a Star Coin. After the Skewers are a few Whomps that Mario can get rid of by Ground Pounding on them when they fall down. To get the second Star Coin, Mario must continue to the Donut Block. There, he must use the rope to get enough momentum to swing to the platform on the left. He should jump over the ceiling, wait for the Whomp to fall over, and then grab the Star Coin. He should go back to the Donut Blocks, grab the rope, and jump over the only Big Whomp in the level after it falls down. Here, Mario is faced with more Skewers. When the player reaches the double doors, they should go past them to reach the third Star Coin. While the Skewer is going up, Mario should quickly go into the water and jump to the left, then to the right before the Skewer goes back down. Mario should enter the double doors to face Cheepskipper and three Cheep-Cheeps in battle. To defeat Cheepskipper, Mario needs to wait until he jumps over the bridge, and then he should jump on him a total of three times. After defeating Cheepskipper, Mario goes to World 5.