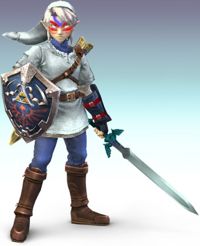 The Legend of Zelda Freak is a User of Super Mario Wiki, residing in Germany. He is also known as The Rated R King. The LoZ Freak is a Fan of the Mario Party Series and has played nearly every title of this series (exceptions being Mario Party 6,7,8 and DS) and played every title of the Mario Kart series, that has been published in Germany so far.

Beside the Mario Series, he enjoys playing the Legend of Zelda series, of which he also played nearly every title (exceptions being Four Swords and Twilight Princess).

The Legend of Zelda Freak is in possession of a Nintendo Gamecube and a Nintendo DS. He has had a SNES, N64 and Nintendo Gameboy. It is unknown wheter he will buy a Wii or not.

This User's favorite Nintendo Character is Link. He likes his moves and his moves. He is the reason he came to the Soul Series of Fighting Games by Namco. He likes his blue (Zora) tonic most.

Link is also his favorite Character in the Smash Bros Games. One of his favorite moves in the games is the Longshot or Hookshot, depending on the items Link is using.

The Legend of Zelda Freak has been happy when Link's participation in Brawl has been announced. However, it is unknown whether he can play Brawl or not, due to the Wii and the lack of possession.

This user likes playing Ocarina of Time and Majora's Mask, the two Zelda Games being released for the N64. He is impressed by the graphics the two games had. The LoZFreak thinks that Ocarina of Time has been the most epic Zelda Game he's ever played.

Relations to the Mario Series 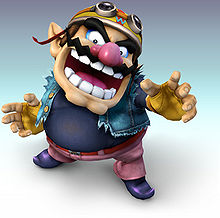 His favorite Character in the Mario Series is Wario. He has liked him since his first appearance in Super Mario Land 2.

He has yet played Wario World. But he hopes that this changes soon. Alongside Mario Party, he likes the party game WarioWare, Inc.: Mega Party Game$!. He played nearly every Wario Platform Game.

He likes every Mario Kart Game. His favorite Characters are Wario and Luigi.

File:Nintendo 64 Console.jpg
His favorite Console to ever be published is the N64.

His favorite Console is the Nintendo 64. He bought it in 2001 and played Super Mario 64 on it for hours. At this time, he didn't know that N64 was already "dead".

Soon, he bought Mario Party 2 and was instantly impressed. He played it until he sold the console to buy the Nintendo Gamecube (bundled with Melee).

His favorite Game is Ocarina of Time, which he plays untill today in the Master Quest.

The LoZFreak has current plans for a self-made Fangame. "Zelda" will be in it. For further information go here.