Hello. Please consider this before you add back the info, thanks.

These characters aren't confirmed so please stop adding them in. If you can give me a reliable source then you can add it back in. Yoshi876 (talk)

Ok, but if they are characters when the game comes out, you will have to let me!

Hi I'm Luigi and I say we should go to Nintendo and tell them to make more games with ME! Sincerely, Luigi

Hi. Just telling you removing these are against the rules. If you keep removing them you'll get in some serious trouble. Welcome to the wiki though.

Because he likes to eat

RE: Can I be your friend?[edit]

You can be my friend, but I can't make you a userbox. But here's mine to put on your page |-

I see your writing in pages usually consists of "you"s, but remember to avoid using it and use "the player" or "Mario, Luigi, Peach, etc.". --APA TKB

You can use the edit tab at the top of the page to edit the whole page at the same time rather than going through one by one. Yoshi876 (talk)

Hello. Although Waluigi and Yoshi are on the boxart of the game it has not yet been confirmed whether they are playable as a result there status should remain as a question mark. Yoshi876 (talk)

Hi, please don't create duplicate files for no good reason. You may have not notices, but File:Luigibirdie.jpg was already made by me ages ago, 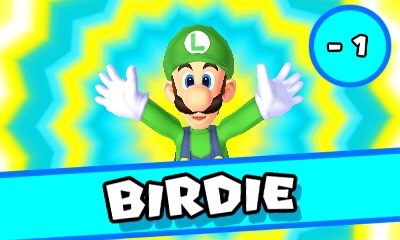 . I you think that it's better quality, just improve the image instead of re-creating it. -

Images with bad transparency like the one you uploaded are not allowed, which is why I reverted your revision.

Generally, when people attempt transparency, they don't prop it against a black background before noticing the leftover light gray specks (leftover from removing a white background). This is what we usually see in edited pictures, so that's how I check if a transparency is bad. If it's especially bad, the specks are visible against the black background from my CSS. While transparency in the images is useful, we can't do with subpar transparency jobs, so I highly suggest keeping the image as it is, keeping your transparent edits to yourself, and waiting until we get an official render, raw from the press release. This image is one of them. Note the transparency job there. Oh, and nice find for the Luigi images! Let's also hope that we get the renders themselves too! Luigi is awesome, too, my second favorite character.

Nice work on the Mario Maker Sprites, but it was my intention to do them. See here for proof. Have a nice day!

File:FireLuigi_Puzzle-Dragons.png - It's probably best to wait for a higher quality source before adding transparency, if the higher quality source doesn't have transparency. The file has been reverted by L151 (talk), a sysop. I suggest tagging that image with {{image-quality}} and/or keep a look-out for higher-quality artwork. --Wildgoosespeeder (talk) (Stats - Contribs) 14:45, 25 June 2016 (EDT)

Your recent Mario Party: Star Rush uploads are great but you are forgetting two things:

You ignored my reminder with File:DiddyKongMPSR.png by not putting Category:Mario Party: Star Rush Images into it. --Wildgoosespeeder (talk) (Stats - Contribs) 23:07, 19 September 2016 (EDT)

Again, ignoring my reminder and warning, not categorizing File:WarioRioPortrait.png with Category:Mario & Sonic at the Rio 2016 Olympic Games Images. Next time you forget, I will get a sysop involved. --Wildgoosespeeder (talk) (Stats - Contribs) 19:57, 23 September 2016 (EDT)

There is a blue box above this comment explaining how it works. If you forget to add it at the upload page, just edit the file page as you would a regular article. --Wildgoosespeeder (talk) (Stats - Contribs) 14:29, 24 September 2016 (EDT)

Hello. I think that File:KingBoo - MarioPartyStarRush.png should be shown with the black background, the way it was officially released. A trasparent version of King Boo is already available here, and the Peepa here.

Hello! When editing, please try to avoid the word "you" and its varients in order to make articles more encyclopedic. Instead, use "the player" or the character's name. Thanks! --

For future reference, if you can't see the changes in a new version you uploaded, try refreshing the page or clearing your browser's cache.

Hi, regarding your recent uploads, all file extensions in the title should be lowercase (ex: ".png" not ".PNG") as per policy. Thanks!

Since they never responded to their talk page, I'll ask here. Did you know the account "HIhIHIhiHI" that signed up last month and shares your IP address? They are blocked now since you still have access to this account, and this was their only edit, but I'd like some kind of answer.