Hi there, I was wondering if you are going to buy Smash Bros 3DS? I am looking for friends that want to fight with me or something online? By the way how are you doing? we don't talk that much eh. I made another version of your Blue Lightning Sprite, in case you want it: 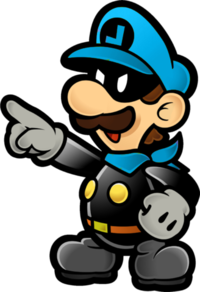 I'm pretty good to :P (I guess, never played online before but I always win from my fiends and familty so...). My mains in melee are Sheik and Samus. Brawl are Meta Knight and Toon Link. And now (in the demo) it is Mega Man but I probably someone else too (maybe wii fit trainer who knows :O ?). I've been playing the smash bros demo recently (I got it since sunday :D). But the demo gets pretty boring after a while if you play alone :/. The other game that I've been playing is Brawl :3. And the non-smash bros game is WarioWare: Twisted! I play this game on my phone with an app called gba emulator. But in the free version you can't turn your phone while playing the game, you have to press the arrows (wich isn't that bad after all). And you?

Me too. School's started again, and I have limited time.

Put this image to the Super Mario 3D World gallery[edit]

Please PM Super Mario Bros. and Gabumon your 'Shroom section on the forums (our forums, which one did you think?) by no later than October 14th. Please remember to save a copy in your outbox. If you can't, be sure to tell us soon and we'll be sure to punish you cruelly work something out.

Please PM Super Mario Bros. and Gabumon your 'Shroom section on the forums (our forums, which one did you think?) by no later than November 8th. Please remember to save a copy in your outbox. If you can't, be sure to tell us soon and we'll be sure to punish you cruelly work something out.

I need help again! I want to upload a picture of Bowser Jr. and the Koopalings arriving into Super Smash Bros. But I don't want it to act as a personal image. Will it still count as one if I add it to several pages within a day? Please let me know. King Dark Bowser

Hey! :). I think it has been forever since we've talked. I don't know if you are still on this site tho :P but I hope so because I like chatting. Hope to see you here someday :)

How did any one of you get your icon within your signature? From User:296lmn20.

File:PenguinLuigiNSL.jpg - If this was taken live from your Wii U through your digital camera, use your Wii U's built-in web browser and submit a screenshot directly to MarioWiki as Penguin Luigi. It works. --Wildgoosespeeder (talk) (Stats - Contribs) 01:38, 12 July 2016 (EDT)

Oh ok, thanks. Never tried that before, I'll give it a shot. -

It will be of type JPEG so it will be very easy to overwrite File:PenguinLuigiNSL.jpg without the need to create a new file. --Wildgoosespeeder (talk) (Stats - Contribs) 01:44, 12 July 2016 (EDT)

I've changed it, but because I don't have access to a computer right now it isn't the best quality. PNG is also generally better, so if you could turn this (http://m.imgur.com/28szYPg) into a high quality PNG that would be appreciated. Or I can just wait until I'm on the computer next. -

I know how high quality a PNG is. I upload them all the time here. Special:ListFiles/Wildgoosespeeder :P As for your request, what you are asking is to convert a JPEG file into a PNG. That will just preserve the JPEG artifacts and generally have a bloated PNG file size. I would much rather prefer to get the screenshot resampled using some other method that wasn't the built-in Wii U web browser as Nintendo limits screenshot submissions to JPEGs. For the time being, your submission is fine. --Wildgoosespeeder (talk) (Stats - Contribs) 01:57, 12 July 2016 (EDT)

Oh yeah, you just said that the Wii U makes images into JPEG. Sorry I didn't realise that :P. Well ok, thanks for helping me with that. Will use that method next time. Btw, is it the same with 3DS? -

The New 3DS it might because the browser is a little different compared to the old 3DS model. The old 3DS doesn't work in the same way but Miiverse is just as good. There is a homebrew method to get clean PNGs but I don't own any software that is exploitable at this current time. :/ --Wildgoosespeeder (talk) (Stats - Contribs) 02:05, 12 July 2016 (EDT)

I've only got an old 3DS so I guess that I'll stick to Miiverse. Miiverse shrinks the images a bit so it isn't the best, but it'll do for the time being. Thanks for the help! -

Shrinkage only occurs on the Wii U when submitting screenshots to Miiverse. This doesn't happen for the 3DS. --Wildgoosespeeder (talk) (Stats - Contribs) 02:10, 12 July 2016 (EDT)

I saw that you uploaded File:VolcanoShot.png. Very nice. I have a request for you seeing how you may be up to the task. Can you just replace all the images in Power Shots by overwriting PNGs and changing over the JPEGs to cleanly captured PNG versions of them? I have had those images tagged for months now with {{image-quality}}. I can't replace them because I have no idea how to play the game and get everything. As an extra but recommended step, please apply PNG Monstrous to the PNGs. Don't forget to tag the JPEGs with {{delete}}. --Wildgoosespeeder (talk) (Stats - Contribs) 18:49, 30 July 2016 (EDT)

All you need to do is make sure the PNGs are either in the same directory as PNGMonstrous.exe or PNG Monstrous is pointing to the directory containing the PNGs before pressing run. For what is checked/unchecked, this is the preferred configuration, but for dimensionally small PNGs, you have access to all the optimizers. Chances are that GBA screenshots will be better optimized with pngout or zopflipng than the other optimizers. It won't take much time to cycle through all the optimizers for GBA screenshots of 240x160 anyways. It does take more time with say Dolphin screenshots because my uploads are within 1600x900. --Wildgoosespeeder (talk) (Stats - Contribs) 20:31, 30 July 2016 (EDT)

Hey Ninevendo. I didn't realize that it had the "Shots" subcategory. I would have included both of them.

MarioWiki:Categories is the policy pahe on category usage. It is a long page, and I will need to take the time to read it all carefully before I can answer your question on whether the most specific category should be added. I will contact you again soon. Keep contributing!

Thank you! And nope, there doesn't seem to be a template or a category for the game, surprisingly enough. Just an images category.

File:ToadbertBIS.jpg was replaced by A gossip-loving Toad (talk) with File:ToadbertBIS.png. It is used on one of your work pages (User:Ninelevendo/Work). --Wildgoosespeeder (talk) (Stats - Contribs) 17:02, 16 August 2016 (EDT)

Thank you informing me, I will change my work page accordingly. -

Looking at your work page, you will need to make more adjustments because there are more images missing besides the Toadbert one. --Wildgoosespeeder (talk) (Stats - Contribs) 17:05, 16 August 2016 (EDT)

I'm working on getting or replacing all the images, however haven't had the time to do so yet, hence why it's on my work page and not the main article. -

Should have searched through Special:UnusedFiles because we have File:Main Boss 5 Snifberg the Unfeeling.png with a missing article. I will give File:SnifbergtheUnfeeling.jpg this and that is sharper and slightly less dull-colored. --Wildgoosespeeder (talk) (Stats - Contribs) 23:05, 20 August 2016 (EDT)

Oh, so there is already an image. I should have checked there first, thanks for telling me. -

I was going to see about addressing said situation on your talk page about this matter as well (along with Alex95's talk page, which I am already doing). And in short (no offense to you, of course), it looks like I just got my rear kicked because if my assumptions are correct, the rules are saying that for the game articles, any trivia mentioned on game articles must be targeting the installment itself only; any other "details" which are still worth mentioning are better for other respective existing articles instead (character articles in this case regarding the Mario girls). --M. C. - Profile | Talk Page 14:17, 31 August 2017 (EDT)