Here are my archives.

I Updated My Friend Userbox!

Mario Party Advance was on GBA, Not DS. PS Your games list on userpage.

The warning you gave to Spongebat[edit]

Okay, those pages were from 2010. The fact that you gave him a warning over ancient pages is ridiculous and a violation of the Warning Policy; it's specifically mentioned at the end of the FAQ. Next time, use common sense and don't warn people over things like this unless they're actually recent, please. - Turboo (talk) 18:34, 3 September 2014 (EDT)

Users who are Patroller, or are a higher ranking, have access to a tool called "CheckUser" which we use to find IP addresses. Yoshi876 (talk)

I don't mean to come off as rude, but I don't even know you. Hello, I'm Time Turner.

That's not what I meant. I've never interacted with you in any fashion other than the recent fourth wall proposal. I'd rather have the people I list as friends be a bit more meaningful. Hello, I'm Time Turner.

No but I get as soon as psible.

What? I didn't ask you something... that row at top of the page of some users isn't allowed anymore, but if you want to tell your status you can use the format of the template you want, change the colors however you want and write the status. You can't create User:Joseph/staus anymore though. But none said you can't use templates for thing. Though beware that you can't either make a Template page. You should edit it anytime your status change. If you didn't get it, ask again, I'll try to explicate better.

Hi. You are only allowed to have three FA nominations at a time, and the new one you just made makes that number 4 so it will be deleted. In future only keep to three active nominations. Yoshi876 (talk)

You have received numerous informal reminders on this, now here's the formal one. Articles should not be one of two liners. Look at other articles on the subject to get an appropriate length. Yoshi876 (talk)

Well you should make sure you have everything necessary for creating an article when you make it. The creation of a stub article is now allowed. Yoshi876 (talk)

There's already a castle category, and there's no need to split things up through gender. Yoshi876 (talk)

In The Fianal Is Spreading! Did People Look At My User Page?

Do whatever you want, but I don't like much Tsunami's Shrooms. How about Tsunami's Shellfest? Green Shells (Shells in general if not possible) only. I had one with my mom in MK8. Emblem... I don't have online, so I don't know them. What are them?

Gosh. Tsumi'sShellfest? Tsumi may be a diminutive of mine (but I don't like it). Or Lakitu Shellfest? Koopa Shellfest? Tsunami Shellwar? TsunamiShellfest? And for the emblem, I'd like to see Lakitu, that's my favourite character, or a Triple Red Shell.

Sure. I'm not sure you will see it right now, but next time I will ever connect to Internet with the 3DS you will surely see the changes. {

Really? Thanks 😊 Maybe we can have a match sometime. -

I don't really have time to play or really do much for a little while, I have a school assignment that a really need to do. I'll talk to after then. -

Off the top of my head, I don't know, but I highly, highly, doubt that not a single villain other than Mario has said Mario's name. Hello, I'm Time Turner.

Be sure to check this list to see if the username isn't already taken. If it's taken, you can take the username only if it's a vandal or the user has made no contributions.

@BabyLuigi64 That still does not mean Joseph can still change into that name. Any user (unless blocked user) that has created an account and made contributions must not be renamed for another rename. ~~ Boo4761

Okay then. So just "Yoshi" is out of the question, but Joseph, my other suggestion still stands.

Your article is too short and has a lack of images. Please expand it or it will be deleted. ~~ Boo4761

Hello, your proposals shouldn't be for small reasons such as changing an infobox image, okay? Just post the question on a regular section. Thanks,

Hello Joseph, it's good to see you back! I was kind of sad to see your entire userpage replaced by "Retired, but I may come back.". The wiki's been great. Unfortunately, Wii U's not featured yet. (Notice I put "yet" there. Sometime in the relatively near future, I can totally see it getting featured sometime.) Keep enjoying the wiki!

Help me decide between Spiny or yoshiwiki for my new username! Notice: "Spiny" has reached 3 votes. If you disagree with Spiny, vote YoshiWiki fast because tomorrow the new name will be made.

Because 1) This is MarioWiki, not YoshiWiki (hey, it could exist in NIWA), 2) Some users are named as characters, take User:Mario and User:Baby Luigi as example, 3) I prefer Spiny than YoshiWiki, 4) the username Spiny is free.

Hey, why wasn't I told about this!? :P Are Spinies your favorite enemy? Then go with this. Or like I had advised earlier, come up with a creative spin on that name that no one else has come up with, like me.

Well, I really wasn't around when Spinies made their debut in the original Super Mario Bros., (I wasn't even born then), but Spinies are among my favorite Mario villains. Besides, I'm pretty sure your Spiny, Spike, and my Spiny, Fluffy, would be happy if there was a user who was my buddy who was named after their species. (Fluffy normally is happy, especially when he's playing with coins or Spike.) So, I vote for Joseph to become Spiny.

Dude! I haven't seen ya for MONTHS! Were ya been? Welcome back! King Dark Bowser

Do you have Captain Toad: Treasure Tracker?[edit]

Do you have that game in the "Heading"?

Would you like this yoshi egg I found on an island? I hear sounds coming from it.

File:NSMBU Green Yoshi Egg Artwork.pngg
Take it if you want to.

I'd love to be in your story. Also, you're welcome for me putting you in my fan-made walkthrough of Super Mario: World of Mushroom. King Dark Bowser 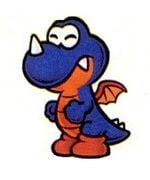 Careful, he's a feisty one!

I found this Rex over on Dinosaur Land. I wanted to keep him, but my Shroob Rex Merlin had some....issues with him. He's yours if you want! King Dark Bowser

Hi joseph how did you do that status thing? mine got deleted by Henry Tucayo Clay --Pinkygirl 00:42, 30 May 2016 (EDT)Pinkygirl

Your Status page is not allowed per policy and it has been deleted. Here's the content in case you want to copy it:

Status of August 25, 2014:School started for me, so might not be online as long as I was before.

Status of September 19, 2014:Sorry for being inactive. I had to do school stuff. When I charge my tablet, the charger doesn't work, and I'll get a new one. I'll be contributing from my computer until I get the charger.

Status of February 23, 2016:It's been so long since my last time on here. I'll try to become more active. If you want to talk to me where I'm mostly active, try the fourms or Miiverse.

Hello. Your personal image, File:YoshiChristmas.jpg, is unused and is marked for deletion. If you would like to keep it, please include it on your user page. Otherwise, it will be deleted after 24 hours of this message.