From the Super Mario Wiki, the Mario encyclopedia
(Redirected from The Goonie Coast Isn't Clear)
Jump to navigationJump to search

The Goonie Coast Isn't Clear! is the second level of World 3 in Yoshi's Island DS. It is an autoscrolling level that takes place on the Goonie Coast; mostly on pirate ships and over the water between each ship. There are four ships in the level, two in each section. As the name implies, there are several Goonies flying around. This level's playable Yoshi is the pink Yoshi. 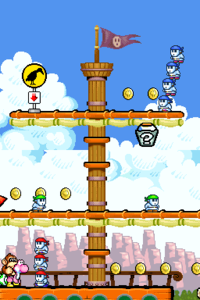 Pink Yoshi starts the level on a coast-like area with some enemies nearby where he needs to use several rafts to navigate, which are guarded by Toober Guys. After this continues for a bit, the screen eventually scrolls up to the first of many pirate ships in the game. Yoshi is given the choice to switch babies at a Stork Stop and grab the first flower beneath this ship, but only briefly as the screen scrolls above them relatively quickly.

Once on the first ship, there are many Pirate Guys stacked onto each other, posing a threat to the Yoshi. However, they can either be defeated by using the Yoshi's tongue or avoided entirely by walking over the middle sail. There is also another Stork Stop at the very top of the ship, but once again, Yoshi must think fast as the screen continues to scroll at a fast rate. At the back of the ship, there is a ! Switch that Yoshi can activate which grants the player the second flower and a Red Coin.

The screen then moves to the second ship, which is similar to the first ship with more stacked pirate enemies, and two more Stork Stops. There are also two Red Coins that can be collected by repeatedly stomping on the deck.

After the second ship, the screen scrolls downwards onto the lake again where not only is there a cluster of Bloopers springing out of the water, but there is also a hoard of coins (many of which are red) and the third flower in the sky that can be collected by using Baby Peach. If one manages to reach the top of the purple rock at the end of the first section, Yoshi can now freely move around this area. However either the level may side-scroll backwards or if Yoshi returns to the very beginning, the section will side scroll again.

The level then moves to the next section, where Yoshi is greeted by the middle ring. What follows is quite similar in layout to the level's beginning, with more rafts and Toober Guys. There are also more Red Coins that Baby Peach can collect and balloon enemies.

The screen scrolls over to the third ship, which has another Stork Stop on the bow. The ship is crowded with pirate enemies, cannons and Goonies, but they can all be either defeated or avoided if the player acts quickly. Among one of the decks is a crate full of stars. There is also a key on the ship which can be collected by throwing an egg at a Winged Cloud, which will be important later in the level.

A path of donut platforms lead to the fourth and final ship of the level, which is also the largest ship seen in the game until Bessie Bass's Battleship in 3-4. The front deck of the ship is less difficult, with only one pirate enemy and a cannon atop the front sail. Another Stork Stop also sits atop the deck.

The screen eventually scrolls to a more difficult area, with more cannons and enemies blocking Yoshi's way. Climbing onto the top sail also leads to a bonus area filled with coins, and at the bottom of the screen is a door (which needs the key to open) that leads to another bonus room and minigame deep down inside the ship's hold.

After another swarm of pirate enemies and cannons, the level finally scrolls off of the vessel, and onto a rock floating above water which is guarded by a large, hungry fish that jumps out of the lake at short intervals in an attempt to eat Yoshi. By throwing an egg at an item cloud, several rocks will rise allowing Yoshi to flutter back on land.

After a few more enemies, flying Goonies, and a cannon, the level scrolls to the goal roulette.