From the Super Mario Wiki, the Mario encyclopedia
< The 'Shroom:Issue LV
Jump to navigationJump to search

Hello, everybody, and welcome to...

Wait, no. I've already done should have been enough times, so, prepare for...

A COMPLETELY DIFFERENT SECTION CONCERNING THE INCREASE OR DECREASE IN MASS IN A POTATO CELL AFTER SAID POTATO HAD BEEN LEFT IN A SUGAR SOLUTION OR SUCROSE WHATEVER YOU PREFER AT DIFFERENT CONCENTRATIONS LIKE 0.0 0.2 0.4 0.6 0.8 AND 1.0 WHAT DO YOU THINK GUYS

For today's experiment, you will need a potato, and some potatience.

The name needs some work, but this is going to be awesome!

I got a suggestion from WakerLuma, but that'll have to carry over to next month. 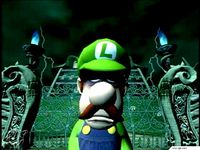 A beta image of Luigi.

Luigi's Mansion, as I said before, I do not own. However, since I'm doing a fully beta elements-themed section this month, I can do some beta elements about this.

Anyway, at the start of its lifetime, Luigi's Mansion was meant to be a Tech Demo, then, when Nintendo decided to make it, they originally were going to for the dying Nintendo 64. Luigi's Poltergust 3000, or Poltergust 400, under the name it had at this time, had a meter, similar to the elemental meter. It was a pressure meter, and ranged from 1-10. If it reached 10, it would burst into flames, and Luigi would be knocked back, costing him some HP. Another meter, called the ghost meter, showed the player how many ghosts they had caught. 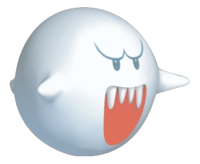 Beta King Boo.
The storyline of the game was a little different too. In the beta version, Luigi, upon entering the Foyer, sees a Blue Ghost in the Mirror. This terrifies the plumber, who proceeds to slide down the handrail, avoid falling chandeliers and manages to find himself in the Parlor, in the safe hands of more...ghosts...until Professor E. Gadd saves him, with his long, brave hair, flowing in the wind! Okay, maybe not the last part. But still.

There was going to be a Portrait Ghost the Safari Room, who was a Hunter, and apparently wanted to add Luigi's head to his collection. Nintendo removed him, on the grounds that the dialogue might be too scary. Finally, there was apparently, according to Nintendo Power, going to be a time system, where, if Luigi didn't rescue Mario within 24 hours, the Mansion, and Mario inside it, would disappear. The game also was once meant to be in 3D, and then later, able to use the Gameboy Advance as a controller, but both of those were unreleased add-ons for the Nintendo Gamecube.

Super Mario World 2: Yoshi's Island is a great game, with great music and great gameplay. It also has some quite interesting Beta elements.

Yoshi originally was going to have a few more forms than he did in the final game: there was a Yoshi Mushroom, Yoshi Plane and Yoshi Tree. I can see how Yoshi Plane would have worked, but Yoshi Mushroom? Yoshi Tree? So maybe this is how everything in the series has eyes: trees, Mushrooms, hills. Of course, the answer was there all along! Dragon Coin sprites can be found in the game's coding, along with a Yoshi with a Santa Claus hat and a strangely coloured Bob-omb-like creature. There's also a Tweeter, plus a different sprite for a Shy Guy, both of which seem to be ripped from Super Mario All-Stars. A Grinder whom is bulky, grouchy, throwing a Barrel and wearing a tie appears too, seemingly resembling Donkey Kong. Finally, there's a fully functional, albeit unused, Biting Bullet Bill.

Super Mario Advance 4 is the remake of Super Mario Bros. 3 for the Gameboy Advance, but includes a lot of differences. And a lot more beta elements!

There are many Super Mario World sprites in the game's coding, in places that, in comparison to Super Mario World's original sprite sheet, are completely different. Also found in the game's coding are sprites for Spiny Cheep Cheeps, Dolphins, Fishbones, Yoshi's Fireballs (YUM), Flutters, Fuzzies and Boo sprites, which were unused in both Yoshi's Island and this game. Para-Goombas, Para-bombs and Porcu-Puffers, who are fully scripted, also appear. A strange, grey switch (and a larger version) with an 'e' on it appears, which is possibly something to do with the e-Reader.

The Gold Cheep Cheep and Green Parabeetle, which were both unused in the original, appear here too, with updated sprites. Finally, there was also an Arrow Lift in the coding. 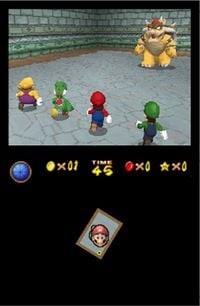 "It's true, all four of them."
Super Mario 64 DS is another remake, of Super Mario 64, but this has a lot more content.

The working title of this game was Super Mario 64x4. Otherwise, there was a fully functional Red Koopa Troopa in this game. It normally acted very different from a normal Koopa Troopa in the game, charging at the player and pushing them back like a Bully. When the player knocked it out of its Shell, it would try and run back into it. When Yoshi eats it, he can breathe fire. The battle with Chief Chilly, although inaccessible when playing as Yoshi, has full dialogue for when the green dinosaur reaches him. There was also meant to be a purple Rabbit (WAAAA), and the Caps the characters could attain were originally found in boxes, before Power Flowers came about.

Also, the game started out as a demo, called Mario's Face.

For our final game, why not cover one that wasn't even released? Diddy Kong Pilot was going to be for the Gameboy Advance, and looked pretty similar to Diddy Kong Racing.

This game was going to use the tilt function of the GBA. A large group of Kongs and Kremlings, including a strange, hillbilly Kong, dubbed "Redneck Kong". The game would have featured unlockable, upgradable Power-Ups, interactive background scenery and up-to-three-person multiplayer. After Rare was sold to Microsoft, this game became reskinned, and released as Banjo Pilot.

Well, thanks for reading. Don't forget to send me a PM if you want to see something in this section! Bye!