I have a question about that one in Super Mario World. If coins are spelling a message to the player, is that really breaking the fourth wall? It's not a character who knows they're in a video game. It might just be a message from Nintendo. Anyone agree? Disagree? Orangeyoshi. Sorry about not signing before.

Sign your comments. Also, it breaks the fourth wall still because its a message from Nintendo to the player...

That counts as breaking the fourth wall? It's not just when the character does it? Oh well. Now I know.Orangeyoshi 20:43, 9 January 2008 (EST)... wait, there's something else. I just beat the game in Super Mario World (well actually, the GBA version), and at the ending party at Yoshi's house, I'm pretty sure Princess Peach was waving to me. Has anyone else noticed this? Beacause it should be in that section, as well as the row of coins. Orangeyoshi 07:56, 20 January 2008 (EST)

I'm not sure, I do have the game (GBA), but I never noticed it.No, wait, I remember that everyone was waving yeah, remember that when they gather at the tree house and peach is waving and Mario and Luigi had 2 fingers up...

I could do it.

Hey, in Super smash bros. melee, when a player gets smashed into the T.v. screen, does that count as a fourth wall?

I guess so. (Actually, it would be breaking the fourth T.V. screen!) By the way, do we know that the Peach-waving-Mario-Luigi-two-fingers-up thing doesn't happen in the original? We'd have to ask someone who played the original. Orangeyoshi

In Mario kart DS/Wii the blooper is atacking the character because they go all black. (Covered with inky stuff)---More news from Shadow Yoshi)

This article is good, very comprehensive, but something seemed strange...

"Thanks so much for-to playing my game."

Another possible fourth wall breaking is in the early Luigi's Mansion. Are you sure Luigi is looking at the player? he could just be looking back at the door.

Why don't we change the name to "Breaking the Fourth Wall"? It is that way on Bulbapedia (not to compare us to other wikis) and "Fourth Wall" describes the wall itself not the fact that the characters are breaking it. (is there a wall itself? English is confusing!)

Um, fourth wall is fine. Its that way on wikipedia which is much more official, and its much easier to type anyways.

I've just noticed. I don't think that referencing Luigi's Mansion is breaking the fourth wall. After all, it doesn't mean that the pianta knows that he's in a game. - User:TheREALKingK

In Paper Mario The Thousand Year Door, Koops breaks the fouth wall after you beat Doopliss. He says "Sort of easy for a boss battle as it were." Is that considered breaking the fourth wall? Tails777 (talk)

Definitely. You should add that in. Mariomaster228 (talk)

We should. It would help with proof and stuff like that.

In the credits of New Super Mario Bros. 2, Roy Koopa hangs off the D of EAD. Is this breaking the fourth wall?

Could you provide an image of this, to give more context? Hello, I'm Time Turner.

Alright. But not today, my camera is missing. ~~Koopakoolklub

Here. I will retake it if it's not good enough.

It definitely is. Any time you break the names or do crap with the names, that's breaking the fourth wall, certainly.

WOAH, Hey! Then the credits of New Super Mario Bros. Wii is breaking the fourth wall as well!

In the ending credits of the game Captain Toad: Treasure Tracker, Toadette break the fourth wall when Captain Toad go for the green star. She look at the screen and say "Oh no!". Maybe we put this on the article. --LudwigVon (talk) 10:10, 18 January 2015 (EST) 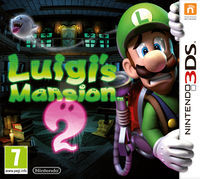 Do you reckon that the cover of Luigi's Mansion 2 breaks the fourth wall? He's peering round the strip at the edge of the box that says Nintendo 3DS, and his fingers actually go right around it. BBQ Turtle (talk) 15:28, 8 June 2017 (EDT)

I just had a thought..... the talking "Peach" at the beginning of Superstar saga and it's remake..... Isn't that kind of breaking the fourth wall? I mean the game kind of aknowledges the text boxes (as the bombs fall out of said boxes and actually explode)Pikmin theories (talk) 17:38, 13 March 2018 (EDT)

I'm thinking we should start trimming down instances of characters looking at the screen as fourth wall breaking. Two of the examples that stood out to me are victory animations where the character looks at the screen in the Mario Golf series, and Paper Mario giving a thumbs up to the screen after an excellent action in Paper Jam (note that he makes this pose in other Paper Mario games and it isn't mentioned). Basically, I just think we should use our judgment and the context a bit more in these cases. --

Seconded, this is a problem with a lot of "trope" articles on the wiki, they attract examples with very "people sit on chairs" energy (or in this specific case, probably "the aside glance exists"). I've given thought to pruning some of these articles for that reason and have done so already in a few cases. --

I think this article should mainly stick to stuff like the "you in front of the TV" from TTYD or the cracking the screen from Superstar Saga & Dream Team. Mario Sakuraba (talk) 06:35, May 4, 2020 (EDT)

Patch it in ya cowards[edit]

would this be counted as breaking the fourth wall? Around the end of Origami King, after Luigi falls down the trap door Mario fell through in the begining if instead of following Peach you go to the door on the right (left leads to where Luigi's wall came from) the door will be open and Boswer says there's probably nothing on the otherside before saying patch in the rest of the castle. now unless I'm missing something, and the way he says it. it kind of seems like he's talking to the developers, telling them to update the game.Pikmin theories (talk) 23:26, July 26, 2020 (EDT)

(The quote in question) I think so since it wouldn't make as much sense in-universe.