In memory of Walkazo. If I could say a few words to you before knowing that you would leave forever, I would just like to thank you for contributing so much to the Super Mario Wiki, for all the joy that you brought everyone in the community. I didn't know you as well personally, but I knew you loved birds, used guns before and showed us pictures of it, were into some anime, made cool comics/drawings, was hilarious and all around a really good friend to all. It's been a few months and we all can't stop missing you, but my final wish for you is that you rest in peace. 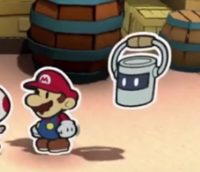 Partner? More like Paint-er! *snort* ok you can leave if you want.

Hey guys, it's TheFreshPrince, aka Super-Yoshi (talk), and today I'm here writing for a very special issue. I'm going to be doing something new; I'm going to be giving my first thoughts on a game rather than reviewing it. As you can probably tell by the title, I'm going to have a fresh analysis at Paper Mario: Color Splash, and don't worry, I've got plenty of stuff to say about this train wreck. Let's get right into it, and have a final moments of silence for the death of Paper Mario series because we all know the style we love is definitely not coming back after this.

Alright man so they got 6/7 colors of the rainbow. How the FUCK are they gonna shaft my home boy indigo? This is actually racist :(

You know, I don't understand. Who said they wanted this shit? Did anyone enjoy Shitter Star? Man, honestly it just upsets me that Nintendo shuts themselves in and keeps puking out vomit like this because they think everyone enjoys this new and cool mechanic of no actual Badges or Partners. I dunno, maybe I'm just getting old? I could just be getting tired of video games perhaps. But yo, I see literally no hype for this game. One of my real life friends a few months back said it looked "dope" and I was ready to slap the shit outta this guy. Dope? What the fuck looks dope about this??? Maybe the devs were on dope when they made this, but then he also said he's never played a Paper Mario game in his life, and I was like, dude, you're missin' out, go get it. So he got Paper Mario for the N64 on his Wii U and he said it was a really fun game, and I had to break the sad news to him that they completely changed the format from the third game onwards. He said he's still gonna try out Color Splash regardless but also questioned and was puzzled about why they removed Partners as they seemed like one of the core things that made the game fun as you can use their abilities to traverse along the map. If a guy who literally just started playing the series this year says that the new one doesn't seem as fun as the original, you know somethings wrong and it isn't the "nostalgia bug".

Alright so the story looks fucken stupid. From the trailer, we've got Shy Guys that are sucking the paint out of Toads and the goal is to repaint Prism Island with your hammer. So like, when did Shy Guys become vampires? Why Shy Guys even? They never had anything of that sort in any other game. And the only "friendly" species I'm seeing around Prism Island are Toads. And they all look the same! Nothing makes any sense in this shithole. Another complaint I have is the return of Things which is like pretty much the closest thing to a partner you'll get, except they're one use and most of them are really dumb like a big ass fan or a big ass cat or a big ass piece of shit that I hope doesn't come back. The Koopalings make an appearance so I guess that's something to note; I don't think they've ever appeared in a Paper Mario game before. Of course, I prefer original villains rather than just recycling a few from past games. The Koopalings are getting old folks, they need to be sent to a retirement home (just like for old folks ha ha).

Instead of distinguishing them by appearance and unique names like Tayce T. and Vanna T., we're just going to have one Toad with no name make countless clones of himself and populate the island.

But seriously, this is a clear sign that they're running out of ideas. They can't even make Toad name puns anymore or create anything unique (bosses, NPCs, etc.) from what I've seen in this title. The gameplay looks pretty much the same as SS; the only interesting thing to note is the new paint meter on the top left which has R/B/Y and a number which I guess is how much color you got left until it's time to refill. This is probably the only thing that's new and isn't shit, and sounds like a cool system to manage. I think they should've made it so that you should be able to paint whatever color you want using your hammer because looking at gameplay, it's just a random color that gets outputted and it doesn't look like you can control that. This would make it so that you can turn Prism Island into your own unique land, which would be cool. Sort of like an RPG coloring book? I guess that sounds dumb but if you could actually do that, then that'd be really neat. On a scale however, the amount of fresh ideas to recycled ideas is still outweighed, so just because there's a few things that seem like they're cool, let's not forget that the other 90% is Nintendo testing our patience of how long we can endure these garbage sequels.

Oh yeah, and they showed something about cutting out the environment at about 0:54 of the same trailer. Like, whoop de fucken doo, really innovative gameplay. Also did they just put "cleverly"? How the fuck do you "cleverly" cut out something? It's literally cutting along the dotted lines. They're literally calling you a dumbass for not being able to figure out that when you see dotted lines, you should cut that shit out. You need to be "clever" to do it.

About the music, I haven't heard much of the soundtrack but it sounds really wacky and jazzy which is nice, probably the area I have the least amount of complaints in. I'm a fan of jazz so anything with that gets an A+ in my books. But in this case, we're just going to give the music an A+. Everything else fails my expectations, I don't see myself having fun with this game at all. It's like playing that one Micheal Jackson game: the music is top notch but good god everything else was horrible.

Overall, Color Splash looks like it's going to flop. Big time. The new (well, not really lol) mechanics are really boring and simplistic (like no experience/levels/badges/etc.) so gameplay would probably slow to a crawl at some point, and you would only be playing to progress through the story instead of common RPG things like sidequests or grinding. I might sound like a nostalgia fanboy, but I really do feel like the series is going downhill. Nobody asked for this shit, nobody wanted this shit, and nobody told anyone to make this shit. It's shit. I recommend not buying this at all and instead (re)play the first 2 or 3 of the Paper Mario series as those were really great. The sad thing is that I don't think there's any hope for the future of Paper Mario and we're just going to have accept that it's permanently ded.

Thanks for reading through my thoughts, I'll catch ya later!