This special issue has really made me think.

If there's anything I've realized, it's that you don't have to be best friends with someone to feel the sharp pain of his or her death. The interaction could be rather minimal – maybe the light-hearted baker who provides you fresh bagels for your commute, or maybe the lady who dry-cleans your khakis for work. Hell, they could be people you disliked with a passion – say, a strict officer who catches you doing whatever you think you can get away with. The person could ultimately be as inspiring and determined or unimportant and unlikeable as one wished.

If you think about it, Walkazo was the greatest friend to many, the friendly local to some, yet the authoritative officer to others – three different perspectives, but one undeniable and unanimous feeling of sadness. And that is way today I do not write solely for myself, but for every contributor, moderator, and administrator; every spammer, vandalizer, troller, and every good-faith editor; the edit-warrer, the Mafia-player, every 'Shroom writer, the Poll Committee member; every proposal-voter, IRC Director, banned user, and every last one of us of this diverse community. Like it or not, you'll be in everyone's hearts when you go, not just for being an amazing editor, but because you are human and our poor, weak hearts are simply human too.

Although Guess Who won (yay), congrats to Yoshi876 (talk), Meta Knight (talk), and The Pyro Guy (talk) for their wonderful sections! Thank you all for the consistent high quality.

Silly Stories, By You


Hey there! Sorry for being behind on these recently. Due to the nature of this issue, I've decided to omit "Silly Stories" for this month (again), considering a story about Mario's quest to defeat Trump would probably not be in the right tone. Sorry about that!

However, you can still vote! It's the same questionnaire as back in May, but more ideas are always welcome.


Hi readers, and welcome to Word Search! Since this is a special issue about our bureaucrat, Walkazo, who passed away in a traffic accident, the theme of this Word Search is the birds that appear in the Mario franchise. After all, for those that did not know, Walkazo was studying to become an ornithologist. Good luck finding all the words!


Walkazo (talk) was a brilliant woman. She would always go around sharing her insight with others, and it was a joy to see her perspective on the world. She was remarkably talented, making several contributions to the community, and producing some intriguing artwork. Walkazo was more than that, though. She was a friend to many people and had a pleasant attitude. I regret not getting to know her more. Sometimes, being able to deal with something like can feel as if you're trapped. Some of you out there might feel lost, like you don't know what to do. I certainly have felt a great deal of apathy ever since it happened. However, I believe that Walkazo would not want us to be like this. She would want us to push through this struggle; just like the many that she had to overcome. Thank you Walkazo; your legacy will live on. Thank you for everything.
How to play:

That's all I have for this month, but next time you'll see me with some picrosses focusing on Power Ups, so remember to read this next time, otherwise I'll, um, make the picrosses explode in your face? 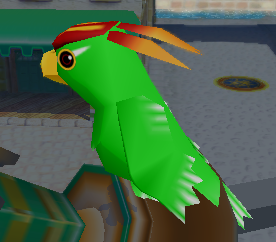 This parrot may look like the best pet ever, but it's allergic to water and will explode into a coin if sprayed. Seriously.

Walkazo (talk) loved birds – for many, that's common knowledge now. As such, it would be an obvious choice to make that this month's theme.

Surprisingly enough, there's a lot of birds in the Mario series. The Super Mario Wiki has a whole list of them. So don't worry, the characters featured today will likely not be obscure at all. Unless I choose so. You never know.

How'd you do? Regardless, thanks for playing, and please check back next month for more Guess Who!


Welcome to Quiz, a place where I... quiz you, on Mario stuff. As you may have noticed, this issue is dedicated to the late Walkazo whom we all deeply miss, so in her memory, I have made the sole subject of this Quiz Koopas. Happy guessing!