Hello, readers! I am your Statistics Manager, Tucayo, here with what is quite a special interview. I contacted Rosalina's current voice actress, Laura Faye Smith via email and she was kind enough to answer my questions. Laura voiced Rosalina in Super Mario 3D World, Mario Kart 8, Super Mario Maker, Mario Party 10, Mario Tennis: Ultra Smash, and Mario & Sonic at the Rio 2016 Olympic Games, and her splendid work has earned her the love of many Nintendo fans. 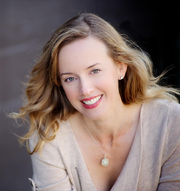 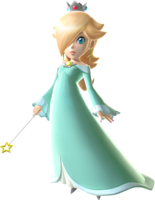 Laura Faye Smith is the current voice actress for Rosalina.


Were you into the Mario games as a kid?
LFS: I was - I loved playing Super Mario World, and I remember winning a Gameboy once in a raffle and being super excited about that. When I was older, I was in a play with a friend who is a huge gamer and he had just gotten a DS Lite, and I started playing with it backstage and became so obsessed with it I ended up giving him money and he went out on a break between shows and bought me my own DS Lite - it's light pink and I still have it! He also lent me the Warioware game called "Touched!" (which is what I had been playing obsessively with on his), and to this day I have still not given it back to him (here's hoping he doesn't read this - shhh). He and I did a different show together later with another friend of ours who also had a DS and we had some good stretches of time together offstage while other scenes were happening so we all brought our Gameboys and raced Mario Kart on the network against each other -it was so much fun! We did come close a couple times to missing entrances because we were so engrossed in our game, but thankfully we always made it.


What got you into the voiceover industry?
LFS: I had done a little bit of voiceover work through an on-camera agent I had when I first started working, but had never really pursued voice over because the opportunities didn't come up that often. That agent ended up going out of business owing me a lot of money, and the agency I signed with right after that was run by this crazy woman who literally just disappeared one day - I still have no idea what happened to her. So at that point I was really fed up with the whole agent thing and said "forget it, I'm done with agents, I'll just do theatre." But then a friend of mine who was a big commercial voice over talent told me about this voice over agency that had just opened in town and encouraged me to meet with them, so I did and they were really lovely and I signed with them and have been with them ever since. No regrets on that decision, and I also now have a good on-camera agent as well.


How did you become Rosalina's voice actress? Was there an audition?
LFS: I got an audition for Rosalina through my agency, and after I did the first audition I got a callback for what is called a directed audition, where I went into a studio and the team from Nintendo was on the line and basically did a live audition with them giving me direction and listening to what I came up with. It was very relaxed and fun - I remember leaving and thinking that even if I didn't book the job, it was a really good experience, and how nice the Nintendo team was - they made me feel really comfortable and ready to play.


What do you like the most about Rosalina? Have you put elements of your personality into your portrayal of her?
LFS: I love her backstory--how she is such a powerful character, but also has a lot of kindness and a motherly side towards the Lumas. I also like that her personality is colored by the sadness of missing her mother, but she's found a way to create a new family and overcome that sadness and still be strong and caring. I think it makes her interesting and complex! She feels like a grounded character to me, and I'm a pretty grounded person who likes to make the best of things, even when things are sad or frustrating, so I feel like we have that in common.


What is the reason behind the confusion of who has voiced Rosalina in the recent games? Do you know why was Kerri Kane's voice used in Super Smash Bros. for Nintendo 3DS / Wii U even if you had voiced the previous games?
LFS: That is a great question! Unfortunately, because I'm an independent contractor and don't work for Nintendo, I have no idea why they use the voices they do on specific games - you'd have to ask them. But here is a corrected list, from Nintendo, of who has voiced what game between me and Kerri Kane and where things were incorrectly listed. If you have the ability to correct any of the IMDB or Wiki sites with this info, please do:

Many of our users are very interested in what goes on behind the scenes, what can you tell us about what is it like to voice a video game character?
LFS: It's truly one of the most fun jobs I've ever had - in fact, it feels weird to call it job because it never feels like work when I'm doing it - it's more like playing. It's super fun and creative and collaborative and the time really flies by when I'm doing it. They sometimes show you an early version of the game with the movements of the character you're voicing, and then you and the director work together to come up with how best to represent the sounds the character would make while doing those actions. There is a script, but sometimes it can be open to interpretation as to what sounds/exclamations the character might make in the situation (like veering of the track and falling into water, for example.) I love trying to figure all that out - coming up with my own ideas and also working with suggestions from the director to figure out how it should all sound.


Which other characters have you voiced? Is there any character you particularly like aside from Rosalina?
LFS: For Nintendo, I recently voiced the male Kana character in Fire Emblem Fates, which was a lot of fun - Rosalina is probably my favorite character I've voiced, but Kana is a close second. I also have done multiple voices for Mad Head Games, and those are always fun too - those frequently require a lot of different dialects, so I've had my work cut out for me there. But that team is also really collaborative and open to me contributing my ideas about how a character might sound, or different ways a character might deliver lines, and I love that process of creating with a director.


I know this last question is probably hard to answer, but can you give us a hint about any future appearances in Mario games?
LFS: I wish I could! But again, since I don't work for Nintendo directly, I simply don't know. Let me know if you hear anything, 'kay?

I want to give a heartfelt thanks to Laura for taking some of her time to answer my questions in such detail! If you want to know more about Laura, be sure to visit her official website. Laura is incredibly talented so I definitely hope we'll get more of her in the near future!